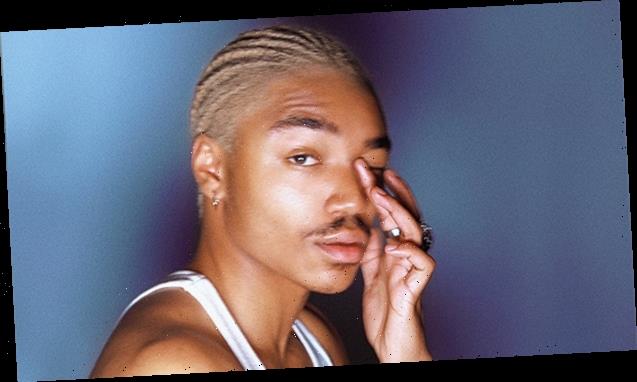 Josh Levi, who won hearts as a Season 3 finalist on ‘The X Factor,’ has returned with his biggest music collection yet. He discusses these new songs, his ‘responsibility’ in the Black Lives Matter movement and more in an EXCLUSIVE interview.

Josh Levi has released his new EP, Disc One, amid a time that seems apocalyptic. A pandemic has completely revamped how people socialize worldwide, and racial injustices have started a revolution. In the midst of all this, the 21-year-old The X Factor finalist brings forth the EP’s lead single — “If The World” — that’s a unique take on this pivotal moment.

“To me that song represents, I guess, a feeling of being in a moment where things…are no longer what you thought they would be. And so I was posing the question — if the world wasn’t what you thought it was in a moment, what would be the most important thing to you?” Josh EXCLUSIVELY told HollywoodLife ahead of the July 1 release of Disc One. To answer his own question, Josh said this: “I think that love is the most important thing.”

“It’s always the answer and love is also a form of hope to me,” Josh continued, a belief that is reflected in his lyrics. “If the world is burning / Then why don’t we fall in love? / And it keeps on turning / But what if we make it stop?,” Josh sings in the chorus, revealing how he truly feels that the world is on fire (he penned the song amid the coronavirus outbreak). However, Josh still considers himself an “optimist.”

“I really wanted to turn that into something beautiful and something that people could relate to,” he explained. “I don’t believe that adversity in opposition is the final say…Even if the world is up in flames and there is all this chaos happening in the world.”

If the apocalypse is just the prologue for the future, the production and delivery of this song — and the entire EP in general — is a reflection of this. Josh describes his sound as a “meeting” between “things that [he] love[s], sonically” of the past with “where music is going in the future.” Josh’s personal tastes and forward-thinking vision supersede a certain genre, as the music industry has begun to break away from assigning artists to restricting labels.

“It is hard to categorize music, especially like as a Black male artist. So because I’m not one thing, there’s elements of pop, there’s R&B, there’s rock, there’s all the things that I love, there’s alternatives, some of everything,” Josh said, a variety that is evident on the seven-track EP. Josh’s powerful voice is the only constant amid a diverse tracklist, from retro synths in “SEATBELT” to trap in “WHITE LEATHER.” There’s a little experimentation in everything, and thus, Josh considers himself “genre-less.” Nirvana, Chris Cornell, India.Arie, Jimi Hendrix and Pop Smoke have also been the artists frequenting Josh’s playlists as of late, a further testament to his boundless music tastes.

This all ties into Josh priding himself on being well-rounded. While pursuing a full-time career in music, Josh committed four years to achieving a bachelor’s degree of science in business and finance, which he earned from Full Sail University in July of 2019.

“I didn’t want my future title to be the most successful artist, Josh Levi…I wanted to be the best version of a Black man that I could be,” Josh said. “And I’m a businessman, I’m super ambitious and for me, it never stops at music. I actually want to shift things in culture and then governments even maybe one day, and just have a better understanding of business and numbers and structures and entertainment so that I can actually start to make waves and start owning things and having a larger voice than just my music.”

For now, Josh is building that voice, which this EP is establishing after having not “too extensive” of a “catalogue of music” — which he said is “about to change.” Regardless, Josh has already attracted the attention and support of big artists like Normani — whom Josh considers “family” after growing up with the fellow The X Factor alum in Houston, Texas — and Billie Eilish long before the release of this new EP.

While Josh feels “blessed” to have such a strong support system, he’s also his own role model. During our interview, Josh acknowledged his “responsibility” to use his voice and platform amid the Black Lives Matter movement. With more than 128,000 Instagram followers and nearly 200,000 YouTube subscribers, coupled with the recognition of being on television after appearing on Friday Night Lights as Darius Merriweather between 2009-2011, Josh knows he can make a big impact by being his “best self.”

“I think Black people owe it to themselves to in a world that’s against them, be their best selves, because that’s actually what shifts things,” Josh observed. “When you’re in positions of power, or create a platform or go against the grain of grapes, the rules or push the envelope, you’re showing people that you’re powerful and that you matter, and that you’re not afraid. So I think that’s also amongst the many goals that I have in terms of just the movement and my community and just trying to push and promote Black artists much as possible in this project and everything I do moving forward.”

And this is exactly what Josh is doing. In a time that can feel like a dooms day put on loop, Josh is taking control of his own narrative by pushing forward with his biggest collection of music yet while simultaneously calling for the celebration of other Black artists.

“I think it’s about amplifying and fighting back and pushing the boundaries and just moving forward as opposed to saying that ‘We’re okay, we’re fine, we’re good and it is okay.’ It’s not okay. And I learned how to say that this month, based off of everything that I’ve personally experienced and things have to change,” said Josh, who isn’t letting an apocalypse — or anything else — stop him from setting out on building his empire.