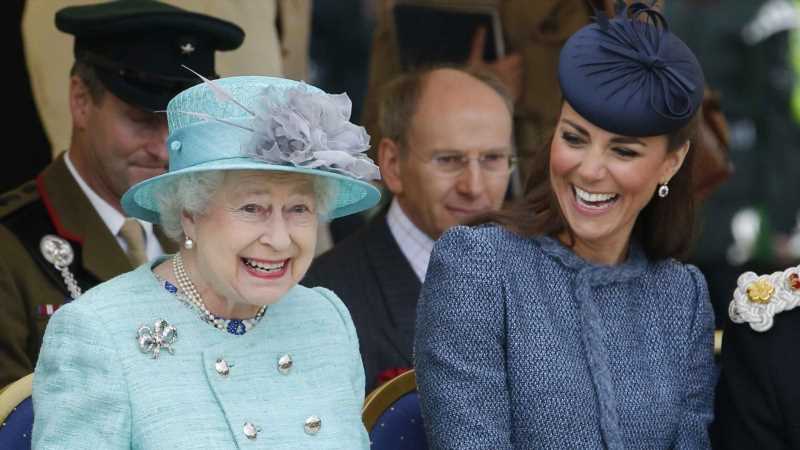 It has been nearly a decade since Kate Middleton married Prince William in Westminster Abbey in April of 2011. Since becoming a part of the royal family, Middleton has gone above and beyond to impress the grandparents of her beau (royals — they are just like us!). As it is highly likely that Middleton will be Queen of England someday, she has spent quite a bit of time attending royal engagements with Queen Elizabeth II. As royal expert Duncan Larcombe told OK, according to The Observer, this quality time spent with the queen has made it possible for the pair to forge a “fantastic relationship.” While the pair share a closeness that may seem detached to some, Queen Elizabeth has shown her fondness for the Duchess of Cambridge by awarding her special privileges, like a direct line to speak with her at any time. According to Larcombe, Middleton uses this direct line to ask the queen for advice and give her updates about her great-grandchildren.

Just six months after Meghan Markle and Prince Harry’s wedding, it appears as though the Duchess of Cambridge used this close relationship to her benefit when she approached Queen Elizabeth with her concerns regarding Markle’s “behavior.” Authors Andy Tillett and Dylan Howard revealed in their book, Royals at War, that the pair made a pact to guide Markle through her new role in the royal family (per Marie Claire).

Two years after Middleton and Prince William got married, they moved from Anmer Hall in Norfolk to Kensington Palace. Due to the fact that Kensington Palace is within walking distance of Queen Elizabeth’s residence, Buckingham Palace, the pair have been able to meet with one another often. A royal family insider told Us Weekly that Queen Elizabeth and Middleton will often “casually catch up over afternoon tea.” However, these meetings are also business-minded, as Queen Elizabeth is aware that Middleton will likely become Queen of England in the future. “Other times, they’ll have more formal meetings, where the queen will give intense one-on-one training about taking on the crown,” the insider told Us Weekly.

Royal duties aside, Middleton has often spoken about the queen’s adoration of her great-grandchildren. Back in 2016, Middleton revealed that her eldest son, Prince George, called his grandmother, Her Royal Highness, “Gan-Gan.” “She always leaves a little gift or something in their room when we go and stay, and that just shows her love for her family,” Middleton said during ITV’s Our Queen at Ninety documentary, according to Entertainment Tonight.

It is likely that Queen Elizabeth’s friendship with Middleton will be a comfort to her after the loss of her husband, Prince Philip, on April 9.