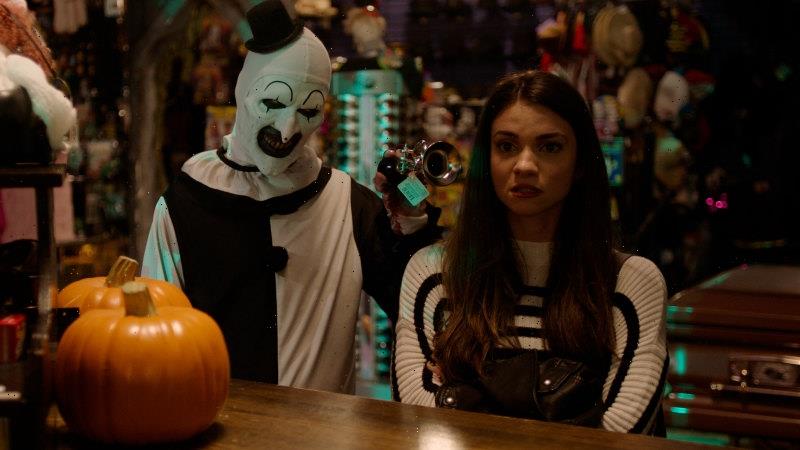 Horror cinema may be thriving in the 2020s, but even for storytellers at the more extreme end of the genre it’s getting harder than ever to hit on something that genuinely freaks people out.

Still, US indie filmmaker Damian Leone has been giving it a red-hot go, most recently in the brutally gory Terrifier 2, the latest vehicle for the mute but lethal Art the Clown (David Howard Thornton), who first appeared in Leone’s 2008 short The 9th Circle.

As Leone cheerfully explains, part of his process in scripting the Terrifier films involved researching medieval tortures, actual or legendary.

“They would hang people upside down from their ankles…and they would saw them in half with a giant saw, because all the blood would be draining to their lower extremities, and you wouldn’t be hitting any vital organs right away.”

If you’ve read this far you’ve probably already made up your mind on whether you want to see Terrifier 2, which is getting a limited run in Australian cinemas over the coming weekend. But while Art’s antics aren’t for everyone, lately he’s been winning his share of fans.

At the time of writing, Terrifier 2 ranked at number seven at the US box office, and had grossed over $5 million USD against a reported budget of just a quarter of a million.

Reviews have mainly been cautiously positive, which can’t have hurt. Nor can a recent tweet from Stephen King.

Then there are the reports of audience members vomiting and collapsing during screenings, which Leone takes as a badge of honour, while insisting it wasn’t his goal. “I don’t want people passing out or getting sick. I want them to have a good time.”

If you’re wondering where Leone’s idea of a good time came from, some of it might be put down to his upbringing. After all, his mother did name him after Damien Thorn, the evil kid from The Omen.

“She just loved movies – horror movies, action movies, fantasy movies. And I would always just go and watch them with her.”

All up, Terrifier 2 is a more directly autobiographical movie than you might guess.

Sienna (Lauren LaVera), the staunch teenage heroine, is based partly on Leone’s older sisters – and there’s a lot of the young Leone himself in Sienna’s little brother Jonathan (Elliott Fullam), who is not the Antichrist or anything close, despite his bent for researching serial killers and atrocities in general.

On the other hand, in Leone’s eyes the capering, grinning Art himself is “purely a fantasy figure,” a symbol of the absurd randomness of evil. 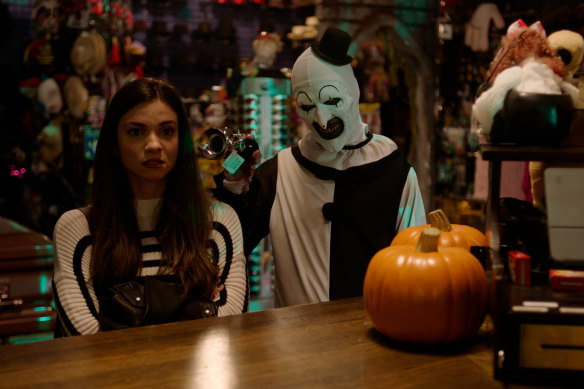 Sienna (Lauren LaVera) is based on Leone’s older sisters, while Art (David Howard Thornton) is a symbol of the absurd randomness of evil.

The key to developing the character, Leone says, was “keeping him simple,” while avoiding the signature traits of earlier iconic killer clowns – in particular the sewer-dwelling Pennywise, as played by Tim Curry in the 1990 TV miniseries version of Stephen King’s horror novel It.

“I said, we’ll go in the complete opposite direction. My clown won’t speak. He won’t be colourful. He won’t have any hair, the red nose, none of that.”

What is it about clowns, though, that gets to people in the first place? This is a question Leone has pondered long and hard.

First, he says, it has to be a clown in distinctive white makeup. “I think when we see a white face it’s immediately synonymous with death, even if it’s on a subconscious level.”

“And you don’t know who’s behind the makeup. That’s another big part of it. You dress somebody up as a clown, it could be your best friend, and you cannot see them through that makeup.” 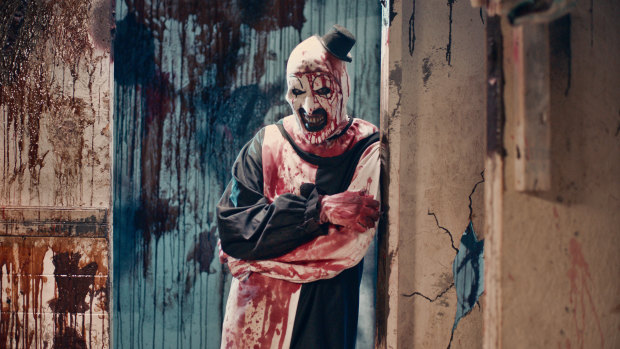 Terrifier 2, by indie filmmaker Damian Leone has been scaring audience members so much they vomit.

Finally, there are the theatrical mannerisms associated with clowning.

“Everything is exaggerated and over-the-top. These are very abnormal things that we’re just not used to. And you put all that together, and then all you gotta do is put a knife in that thing’s hand, and the rest is history. I mean, you’re running for the hills.”