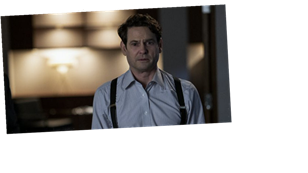 There’s been a lot of hype surrounding new ghostly Netflix show The Haunting Of Bly Manor, and fans have made quite the shocking discovery.

Yes the Halloween-y must-watch sees a rather stuffy uncle seek out a nanny to take care of his niece and nephew after their parents died, but fans have quickly released they recognise the uncle from somewhere.

He’s no other than ET star Elliott, but full grown! It turns out the uncle has been starring in shows since the age of nine and fans of Bly Manor have been sharing their disbelief on social media.

One wrote: “My roommate just found out the guy who plays the uncle from Bly Manor was also Elliot in ET, and now I am witnessing an 80s kid process the passage of time.”

While another added: “The fact that cursed Dad is Elliot from ET is the real twist.”

And a third said: “When u find out Henry from Bly Manor is Elliot from ET.”

The uncle in question is played by Henry Thomas, 49, who shot to fame as Elliott in Steven Spielberg’s hit film.

The child star auditioned for the role after the initial actor was seen as the wrong fit, and Steven tells him: “Ok kid, you got the job."

And Henry isn’t the only person you might recognise from the new, popular Netflix show.

Ten quirky Christmas advent calendars you really need to try in 2020, from booze to food

Amelie Bea Smith is starring in The Haunting Of Bly Manor as lead character Flora, but you might also know her voice from Peppa Pig.

Yes, nine year old star Amelia is the actual voice of Peppa Pig and, if you've got young children, you have heard her voice an awful lot.

Amelia took over from Harley Bird back in January with the co-creators of the show, Neville Astley and Mark Baker, saying: "We're delighted to welcome Amelie to the Peppa Pig voice cast and confident that she will continue the strong legacy of the previous Peppa voice actors."

In Bly Manor, the little girl plays a part in a show for much older audience, in a role which is a great deal more spooky than anything that could ever be shown on Peppa Pig.

In fact, the programme is so creepy that Amelie is not actually allowed to watch it.

She told The Beat: “I still don’t know the whole story, but I’m not allowed to watch all of it when it comes out because I think I’ll be scared.”

After being cast as Peppa Pig, it was reported that the young star could make up to £1 million in a year.