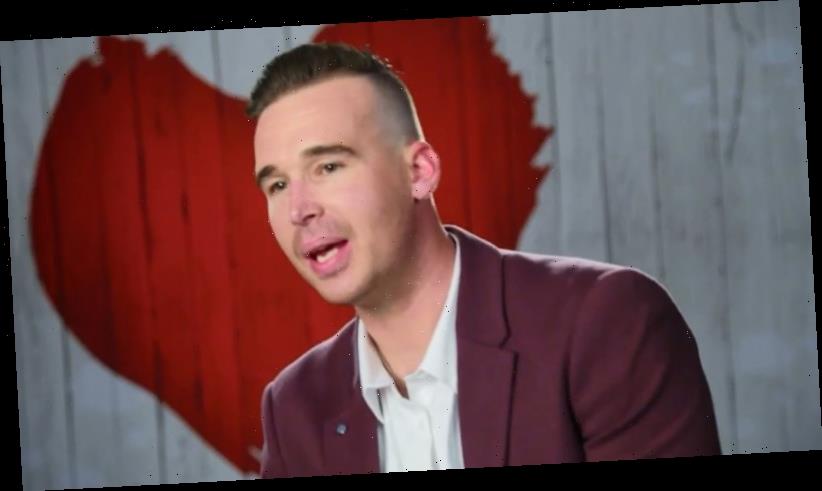 From First Dates, My Kitchen Rules to The Australian Dream our critics have your week of TV viewing sorted. 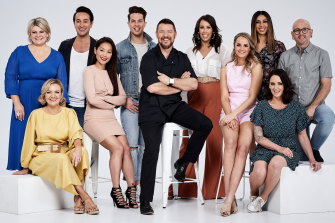 Nothing in MKR is ever crisp when it could be crispy, and the extra-y, that infantile phonological add-on, sums up this over-egged pudding. Australia has run out of enough competent amateur cooks to fuel its endless cooking competitions but there is clearly no shortage of complete prats who’ve grown up believing there’s no such thing as bad publicity. It’s never been more painfully obvious that cooking has taken a back seat to drama than season 11’s split of the contestants into the Fans and Faves, shacking them up in rival “mansions” and encouraging the most high-octane bitchiness since Tiffani Amber Thiessen turned up on Beverley Hills 90210.

Sure, you could watch in the spirit in which it wasn’t intended. You could laugh endlessly at the contestants pronouncing “confit” with a sharp t and saying “the secret to this dish is to balance all the elements” like they’re delivering the Gettysburg Address. But all it really has to offer is the unsettling feeling of being stuck after lights out on school camp with that group of bitchy kids who everyone secretly hates. Short of Manu Fieldel and Colin Fassnidge occasionally turning up to remind us there are kitchen utensils nearby there’s really little difference left between MKR and MAFS as they merge into one super-virus. Be alert, people. Be alarmed. – LD 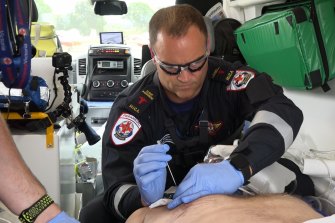 Another day, another life to save on Paramedics.Credit:Nine Entertainment

ER staff. Ambos. Lifesavers. Australians’ love of authority figures has fuelled an entire sub-genre of reality TV – hell, we’ll even dabble with border security agents on occasion. It all points at the series return of Paramedics promising more ratings gold for Channel Nine after its successful 2018 run. The PR guff promises new teams and – thankfully – new patients but the point of these 20 hour-long episodes seems to be less about the personal machinations of the boys and girls in blue, more about milking every drop of drama from the accidents that befall young and old, from a little girl learning to rollerskate the hard way to a motorcyclist whose life hangs in the balance after missing a bend. Recap after recap, we know we’re in safe hands. – LD 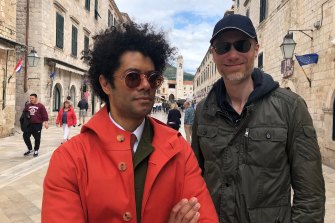 Richard Ayoade is Anne Tyler’s Accidental Tourist come to life, with better dress sense and added gags. No flag-waver for the holiday hotspots he visits on his 48-hour blitzkriegs, the British comedian makes sport of national pretensions while giving every appearance he’d rather be at home with his slippers on in East Dulwich (which explains why this series will be his last before handing the keys to comedian Joe Lycett). Why tourism boards have not blocked him from entering their fair lands remains a mystery simmering underneath season 10 as he ventures to Dubrovnik with fellow comedian, writer, director et al Stephen Merchant.

For those to whom Ayoade’s schtick has grown a little grating (alleviated, it has to be said, by his ever-reliable bon mots) the success of each Travel Man instalment falls on the shoulders of the chosen wingman and Merchant does a capable job, throwing in a few good lines including this week’s 10-pointer, “Let’s cut to you being smug somewhere”. – LD

In the Dark
10Bold, 10.20pm
Are we over the controversy over the casting of a sighted actor to play a blind character yet? OK then. This week Murphy (Perry Mattfeld) gets to cut loose from her embittered alcoholic persona for long enough to make a breakthrough in discovering the killer of her murdered teenage drug dealer friend Tyson (Thamela Mpumlwana). Unfortunately the goodwill the universe shows her might be merely temporary thanks to an unauthorised shopping mall expedition with similarly sight-handicapped Chloe (played by blind actor Calle Watson) going terribly wrong. – LD 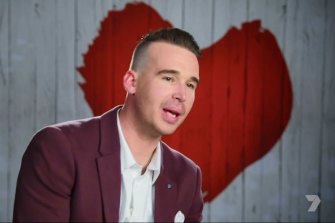 ‘Who can burp the alphabet?’: Wannabe rapper Tyler on First Dates.Credit:Screenshot

Dating shows are torture at the best of times but the Australian First Dates, a local take on a British format, occupies a sweet spot. Much of the credit must go to the truncated time frame that sees the narrative arc confined to a single dinner instead of the drawn-out artifice of insta-wed people moving in together and being filmed for three alcohol-fuelled months (just to pluck a complete hypothetical out of the air).

It’s the kind of telly you can find yourself cringing in second-hand embarrassment when one hopeful half of a date misreads the cues or, as in the case of aspiring rapper Tyler, enlists the waiters to help beatbox his admiration for a young woman. Disaster? No, she can burp the alphabet. The heart-warming proof there’s someone for almost everyone is at the heart of First Dates, and if it doesn’t work out there’s only a wasted evening to lament – although amid the general air of romance and fun this week, the heartbreak of one lovely young woman over an over-confident cad is painful to watch. – LD 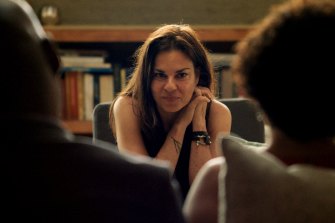 Marriage Story, the made-for-Netflix movie that has become a critical darling, has been described in more than one review as something you should never, ever watch with your partner. The same could be said of this fascinating and prurient look inside the world of the relationship therapist’s office.

Why four real-life couples thought it a good idea to air their festering issues on air after being filmed over 20 sessions is worth a clinical inquisition in itself. Share they do, and the revelations fromeach are uncannily the same: couples fight about sex, money, intimacy and whose turn it is to do the dishes.

Doing her bit for no-bullshit impartiality, Dr Orna Guralnik wins points for being unafraid to put her patients back in their box after misguided flights of fancy but it’s the people on the couch who are the most interesting part of this production. The cameras capture the eyebrow raises, sniggers, the look of arch triumph when the doctor appears to side with one person and the body language of those who have all but given up. Will you take sides? Probably. But we can all agree a shot of a grown man handling a gaming console is never a good sign. – LD 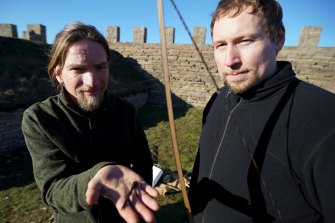 This forensics cold case extends back 15 centuries – the Norse tribes here actually predate the Vikings but are equally homicidal – with the exhumation of a brutal massacre site on the Swedish island of Oland. Skeletons left on the ground after the carnage and the ruins of an Iron Age ring fort lead to all kinds of insightful expert analysis, although that’s not enough for the narration, which pushes ‘‘haunted’’ menace and some supernatural guff alongside the snatches of dramatic recreation to egg on what was already the savagely complete destruction of a self-contained community by one of their neighbours. Does it draw a Game of Thrones comparison? Bet your Red Wedding it does. – CM 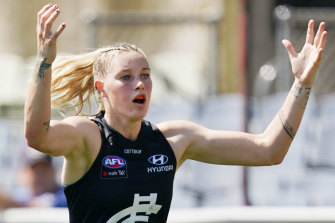 Tayla Harris of the Blues.Credit:AAP

Now a 14-team competition, the AFLW continues to make inroads as both a sporting competition and a viewing option, with Seven broadcasting more games on free to air television while the league acquires the necessary infrastructure of star players, storied rivalries, and, yes, a few competitive cliches. Both these teams had strong victories in round one, which should translate to a close game at a traditional suburban ground. – CM 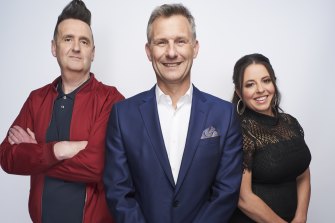 Bowing to some genuine nostalgia and the memory of engorged ratings, the ABC’s recall of its beloved music quiz show is endearingly familiar fun. Host Adam Hills, with serious beard action, and team captains Myf Warhurst and Alan Brough have no problem putting the band back together, with cultural quips and cheery banter being occasionally supplanted by some 1990s-based questions. Despite a run time closer to an hour than the original half hour the momentum rarely falters, while Hard Quiz host Tom Gleeson proves to have quite the cultural memory. What else does the ABC have worth reviving? – CM 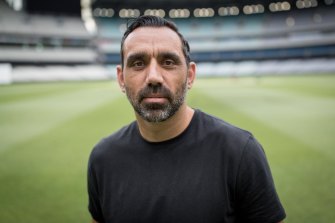 Adam Goodes from the documentary The Australian Dream, written by Stan Grant.

The vastness of Australia’s largest sporting grounds are rendered small and inconsequential in this deeply felt 2019 documentary, which charts the race-driven backlash that drove AFL champion Adam Goodes out of the game after the Sydney Swans’ prominent Indigenous player objected to a 13-year-old fan’s slur in 2013. Directed by Daniel Gordon and written by Stan Grant, whose voice also offers passionate context, the film charts the shameful reality Goodes had to bear and the hard fought lessons he came to hold. Airing it on a national broadcaster is well-earnt exposure, both for the problematic mindset the movie reveals and the skill with which it is made. – CM

*Nine is the owner of this masthead.