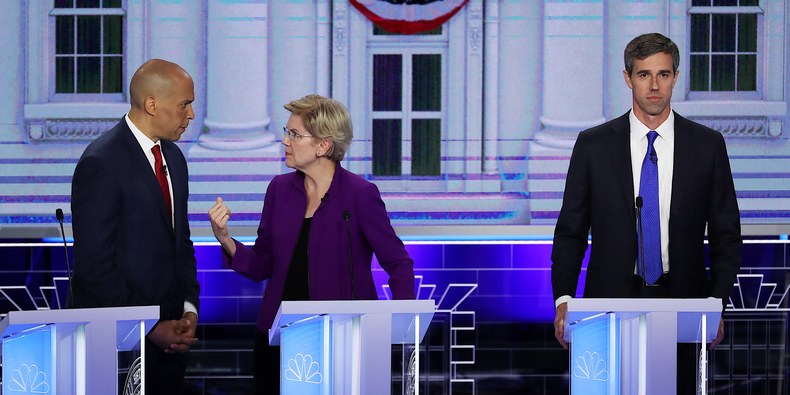 Somehow, the Democratic debate that took place in Miami on Wednesday night is only the first taste of what's to come in the lead-up to the 2020 presidential election, which will take place a nearly a year and a half from now. In case it weren't already clear that there's plenty of narrowing down of Democratic candidates to do between now and then, the stage was packed—even without the party's frontrunners Bernie Sanders, "Mayor Pete" Buttigeig, Kamala Harris, and Joe Biden. (They’ll take their turn—along with six others—on Thursday night.)

There was, however, still one frontrunner from the polls onstage: Massachusetts senator Elizabeth Warren. And while senators Cory Booker and Amy Klobuchar, Beto O'Rourke, Julián Castro, and New York mayor Bill De Blasio joined her, there was still a seemingly overwhelming number of unfamiliar faces to be found on-screen. Oddly enough, to keep the attention on themselves, many turned to the same technique: devoting part of the precious seconds they could use the mic to flex their skills (or lack thereof) at speaking Spanish. "I want to be impressed by the Spanish but it’s starting to feel like an SNL skit," the writer Jenna Wortham tweeted. Of course, she wasn't the only one on Twitter to make such a comment.

Eventually, it got to the point that many began to wonder if the pattern would carry over to Thursday night's debate. Even candidate Marianne Williamson joined in on the fun, though it wasn't long before Buttigieg, who famously speaks at least five languages—including Norwegian, which he's said he learned to read novels in the language—became the butt (no pun intended) of the joke.

For Beto, speaking in Spanish only served to underscore the fact that he's clearly no longer, um, numéro uno. In addition to commenting more generally on his fall from grace since he challenged Ted Cruz in Texas's 2018 election for Senate, others couldn't help but notice that Beto looked, well, ill.

Klobuchar has clearly also experienced a dip in popularity. Seemingly everyone who paid her attention only did so to remark that they will forever associate her with the New York Times's story on how the Senator treats her staff—and, on at least one occasion, has eaten a salad by using a comb instead of a fork.

Of course, there will still more candidates begging for attention onstage—not that anyone on Twitter seemed to know who they were. So, like Klobuchar, they made do with what they had, coming up with their own ways to keep track of who was who. (If you're curious as to who candidates like Tim Ryan, John Delaney, and Jay Inslee are outside of Mike Pence and De Blasio lookalikes, Slate has helpfully published a guide for those with the question "Don’t know who just said that, because he looks like the other guy?")

But some managed to find ways other than flexing their Spanish to set themselves apart. Hawaii congresswoman Tulsi Gabbard made it crystal clear that she's also a veteran of the Iraq war. Thanks to his debate with Gabbard, Tim Ryan established his unfamiliarity with the differences between Al Qaeda and the Taliban. As for Inslee, well, he might just start being referred to as Jay Incel—even if he drew admiration for his passion about climate change.

Rather than tune in to the madness, others decided to devote their attention elsewhere—namely, to Tina Knowles's video closeup of Beyoncé's hair.

Related: The Best Memes of the Trumps' State Dinner and Visit to the U.K.