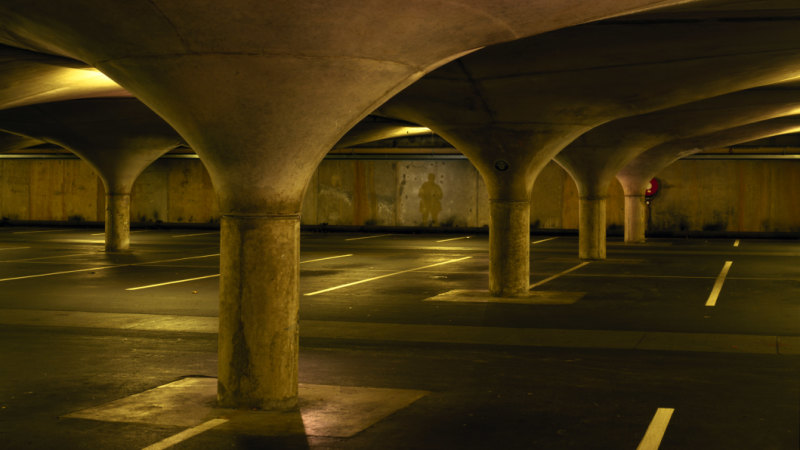 Imagine you're hosting friends in Melbourne who have a day to take in some of the city’s best architecture. What should they see to give them an appreciation of a city where architecture matters? The parameters: they want to walk and the starting point is the city.

Start at Federation Square, the city’s best public space, not only for the leans and folds of its buildings. To stand on its rollicking open spaces – it’s not really a square at all – and look out across the intersection of Flinders and Swanston streets, with the dome of Flinders Street Station to one side and the spires of St Paul’s Cathedral on the other, and the bustle of people and trams and traffic, is to feel the true energy of the city.

Head north to Spring Street and the parliamentary precinct. To be here on a blue-sky morning, with the sun coming up over the Treasury Gardens, is to witness one of the great urban panoramas in Australia, a mix of civic and commercial, old and new, unsurpassed in the land. 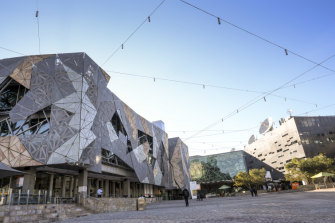 Behold the colonnaded Roman revival-style Parliament House, designed by George Knight and Peter Kerr and built in stages from 1856. Further along, with the Treasury Gardens at its back, stands the Old Treasury Building, an Italianate palazzo from 1858, designed by JJ Clark, a 19-year-old working as a draftsman for the Public Works Department. Between them stand the Victorian state government offices, an urban ensemble of three perfectly proportioned concrete and glass gridded structures – one a 15-storey tower from 1966 by architects Yuncken Freeman, set about a plaza between the Parliament and the Old Treasury. They are remarkable for their sensitivity to the civic and historic context of the precinct.

Walking north, with the spires of St Patrick’s Cathedral in the background, you'll find the former ICI House (now Orica House), a glass curtain-walled tower from 1958 by Bates Smart McCutcheon. Modelled on New York’s Lever House, it was Australia’s first international-style building and our first skyscraper. All 19 storeys of it!

In a city as conservative as Melbourne in the mid-1950s, ICI House symbolised progress, modernity and structural efficiency. Melburnians took Sunday drives just to watch its progress. My father would pile us into his Fiat 500 Topolino, his Mickey Mouse car, just to see how the tower was growing. Raised on piloti, the steel-framed all-glass tower was a wonder to behold. Then, just before Christmas 1960, a pane of glass on the western facade shattered and fell to the street below; then another and another, and before too long 71 pieces of glass had fallen from the building due to impurities in the glass and heat from Melbourne’s summer sun. It wore a skirt of timber canopies around its base for two years while the entire western facade was painstakingly replaced. 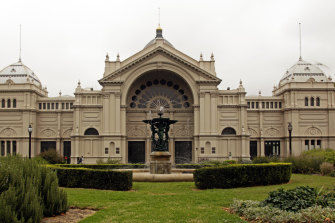 A stroll through the Carlton Gardens, where Spring Street becomes Nicholson Street, will take you to the Royal Exhibition Building from 1880 and the new Melbourne Museum from 2000, if only to experience the juxtaposition of two great exhibition halls sharing the same ground across a monumental plaza, each a prime example of architecture of its day. Here, the classicism of the REB, with its majestic Florentine-inspired cupola, stands in stark contrast to Denton Corker Marshall’s museum of tilts and angles, sticks and blades; all of its parts grouped under a controlling steel grid framework.

The museum’s Forest Gallery is probably its greatest highlight. For here, beneath the raking central blade of the museum, is a dramatic microcosm of the cool temperate rainforests of eastern Victoria, hosting almost 8000 living forest plants and a variety of fish, birds, reptiles and amphibians. Mists rising from the forest floor, water cascading into a pool, tall ferns, rare small plants, thick undergrowth, fallen trees, lichen-encrusted rocks, trickling streams, rock formations, manna gums and fire-blackened tree trunks are just some of the delights of a walk through the forest.

Now, head north along Swanston Street to RMIT University. Here, on an entire city block and in the streets and lanes surrounding it, the university has staked its claim as a great city campus. No other university in Australia understands better the value of investing in the power of buildings as a critical component of its presence in the city, and as an expression of its identity as a leader in technology and design education.

The precinct brims with student activity day and night. Within the space of a few blocks, you can see and experience work by some of the city’s leading architects. From the colourful pageantry of Edmond and Corrigan’s now ageing but no less thrilling Building 8, to Ashton Raggatt McDougall’s (ARM) lime-green and purple Storey Hall annex next door, to the primordial green blobs "engulfing" the former Singer Sewing Machine Company building at the corner of La Trobe Street, also by ARM, this collection of buildings says much about why architecture matters in Melbourne. 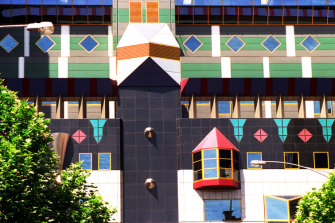 The exterior of one of RMIT’s distinctive buildings. Credit:Julian Kingma

Take time to explore the university’s public spaces, where architect Peter Elliott has turned a virtual casbah of streets, laneways, dead ends and hidden courts into a pedestrian-friendly network of spaces that is a delight to wander through. Begin at Ellis Court on La Trobe Street, with its views toward the dome of the State Library of Victoria, and wend your way to discover hidden lawns, walled gardens, stairs and unexpected nooks and entrances that lead to the back of the old magistrates court and the walled courtyard that was once the Victoria Police garages.

Not to be missed is the university’s New Academic Street, at the corner of Swanston and Franklin streets, where a consortium of architects – NMBW Architecture Studio, Harrison and White, MvS Architects and Maddison Architects – led by Lyons Architecture have taken a once imposing and all but impenetrable corner and transformed it into a masterful reimagining of RMIT’s image as a campus within the city, with a gritty and loose network of student-oriented spaces – a city within a city, of lanes and arcades, rich in connections, technology, diversity and complexity. 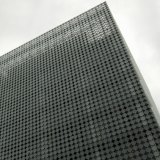 Sean Godsell’s Design Hub, at Swanston and Victoria streets, stands on axis with the Shrine of Remembrance on St Kilda Road, the two worlds apart in style. Godsell’s architecture is an architecture of object-making, and Design Hub is his biggest yet: a 10-storey frosted ice-block of sand-blasted glass discs that enhances his reputation as one of our most trenchant form makers.

Godsell’s unremitting pursuit of purity of line and materials is expressed as a near-monochromatic palette of steel grating, mesh screens, white walls and concrete, and a remarkable sequence of spaces, ramps and stairs, including a steep, ceremonially scaled stair, flanked by shimmering walls of steel grate, that descends into a netherworld of gallery and exhibition spaces, leading into a forecourt of totems, a cafe and a design archives building. 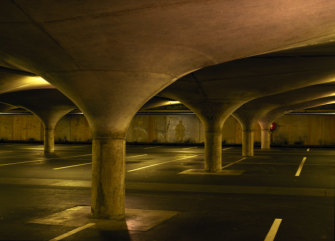 If time permits, head towards the University of Melbourne and one particular beauty: its underground car park from 1971-72, beneath the university’s south lawn. Designed by the practice of Loder & Bayly, it is one of the highlights of Melbourne architecture. Built of hyperbolic parabolic reinforced concrete shells on concrete piers, the 400-space car park was planned to relieve the problem of too many cars on the campus.

The answer came in a simple sketch by JL Van Der Molen, a design engineer, who described the flared, reinforced concrete piers and vaults, showing how trees could be planted in deep soil directly above them. The car park’s beauty is inherent in its stark resolution, something seldom achieved in this most utilitarian of building types.

Back at Federation Square, head south, across Princes Bridge and along St Kilda Road, with the Alexandra Gardens to one side and the Arts Centre and the National Gallery of Victoria on the other. The gallery and theatre complex are prime examples of their architect Roy Grounds’ fascination with pure geometric forms: the circular drum of Hamer Hall, the spire, and the large palazzo-like box from 1968 that is the NGV. Surrounded by a moat, the gallery is remarkable for its imposing bluestone exterior, entrance arch and waterfall window, beneath a roof with upturned eaves, floating over a continuous band of clerestory windows. 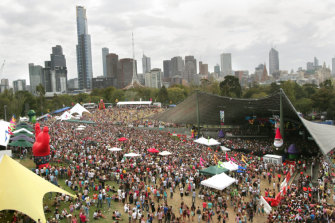 The Shrine of Remembrance, Victoria’s national war memorial in Kings Domain, remains the city’s most important monument. A mix of ziggurat and Greek temple, it rises dominant atop its own small acropolis, on axis with Swanston Street, stripped of artifice and decoration. With few exceptions, no other building in Australia is sited better. And to stand on its forecourt with the shrine at your back, near the perpetual flame and the sculptural tableau atop a column, looking north along St Kilda Road, is a moving experience.

An expansion of facilities in 2003 and 2014 by ARM saw the addition of sunken courtyards to the north and south of the memorial. Stage one from 2003 saw the creation of a new underground entry and visitor centre. It is from here that the general public enters the shrine, across spare ground, save for the words Lest We Forget etched into red-stained concrete walls that lean and fold and press against the embankment.

The symbolic references to war and fighting are immediate and powerful in the courtyards added to the southern side of the building in 2014. Mirror images of the earlier two, one courtyard serves as an entry and orientation space for student groups; the other is a garden court, planted in lush tropical plantings from the Pacific and south-east Asia, its folded concrete walls embossed in a desert camouflage pattern and a band of red steel panels carrying the names of every Victorian town from which young men and women enlisted. A mix of rawness and sophistication, the folded surfaces of the new court to the south-east are of black steel and, if you can decipher morse code, you'll read in its perforations the words to the Ode to Remembrance. A canopy in the form of a red poppy floats overhead, casting dappled shade across the courtyard.

It is from here that groups enter the Hall of Columns; and to climb the stairs and first encounter the forest of massive brick foundation piers supporting the shrine above is an experience not unlike that of entering one of the great medieval cathedrals of Europe. Scattered about the piers are the Galleries of Remembrance, telling stories of men and women at war through exhibits of photographs, artefacts, document displays, paintings and more. 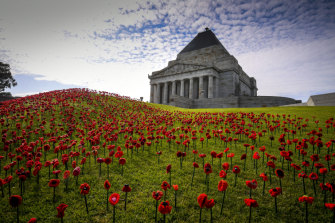 The Shrine of RemembranceCredit:Eddie Jim

One final inclusion: don't miss the former BHP House (1967-72), by Yuncken Freeman, at the corner of William and Bourke streets – all 41 storeys of muscle in black steel and glass, which stands as one of the best examples of Miesian-inspired architecture outside Chicago. Its near-seamless engineered look perfectly reflected BHP’s Big Australian image of the time, for the company was a steel maker only back then. It is, by a mile, Australia’s finest building.