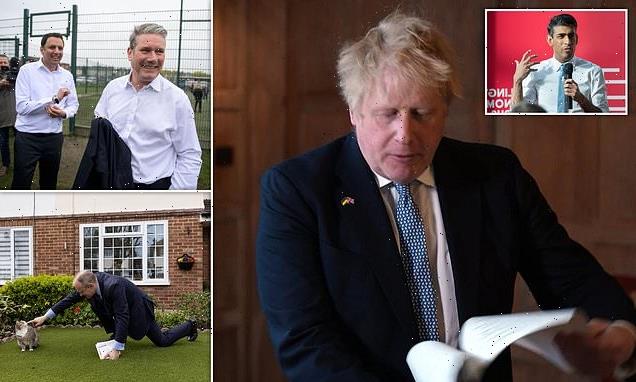 No one should be surprised that Labour, the Lib Dems and the Scottish Nationalists are clamouring for Boris Johnson and Rishi Sunak to resign after they were fined for attending an illegal party during the Covid pandemic.

They would, wouldn’t they? It is what one would expect opposition parties to say. They are bound to react as they have, though the contention of Angela Rayner, deputy leader of the Labour Party, that there is ‘widespread criminality at the heart of Downing Street’ seems wildly over the top.

All the same, it would be silly to deny that many decent people, including loyal Tory voters, will be shocked and dismayed that the Prime Minister of the United Kingdom should be the first occupant of No 10 to be fined for breaking the law. This can’t be dismissed as a storm in a tea cup.

But should Boris Johnson and Rishi Sunak be hounded out of office? I don’t believe so. We ought to examine the evidence in a proportionate way.

Nor can we ignore the fact that Ukraine is embroiled in a war with Russia which could spread further, and that the Prime Minister is playing a pivotal role among leading Western nations in standing up to Vladimir Putin’s mad aggression. 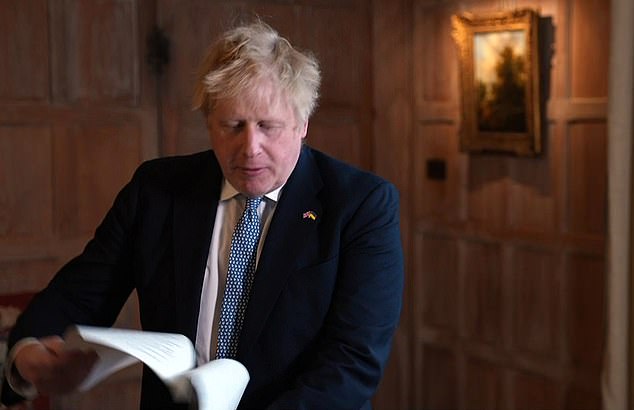 Boris reads from his apology speech after receiving a find for attending a party during lockdown. He may be facing further penalties for his breach of the law

The case against him is, of course, serious. At various junctures during the pandemic, Mr Johnson enjoined the British — or at any rate the English — to observe the strictest lockdown rules.

People were harried by police for walking in the countryside, and in a few cases even fined for sitting on park benches.

As countless people will remind us over the next few days, some were forbidden to visit their dying relatives in hospitals or in care homes, or even to attend the funerals of their nearest and dearest.

Why couldn’t the politicians who insisted on these draconian and — I would argue — excessive restrictions be bothered to observe them themselves? It is a fair question.

But here we should remember proportionality. For the most part, Boris Johnson, his wife Carrie (who has also been fined) and Rishi Sunak did, so far as we know, observe the same laws as everyone else.

They did not visit sick relatives in care homes or attend funerals or break other important Covid rules.

The same is almost certainly true of the 200-odd people who worked at No 10 and No 11 throughout the pandemic.

With a few exceptions, they were probably as punctilious as the rest of us in following the restrictions.

One of those who didn’t obey them was the Prime Minister’s then chief adviser, Dominic Cummings, who in April 2020 undertook a 60-mile round trip in County Durham in what was a blatant contravention of Covid rules. Mr Johnson was wrong to forgive him so easily. It was a bad example.

What the Prime Minister and Rishi Sunak and Carrie Johnson did do — and it is not an insignificant matter — is to attend one party, and very possibly others, in Downing Street, in common with people who worked there.

Most of them presumably believed, though this is less easy to say of Carrie, who is not on the Government payroll, that they were relaxing at their place of work, often in the garden.

In other words, those who get on their high horse over Boris and the goings-on in No 10 often do so on a false equivalence.

Having a drink at work after a long day was against Covid rules, and therefore reprehensible, but such behaviour scarcely constituted an egregious offence. That is what I mean about proportionality. 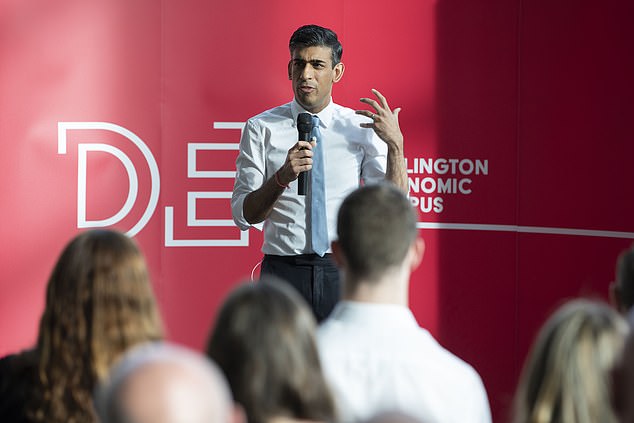 Sharing a fine with Rishi Sunak is to Boris’ advantage, writes Stephen Glover. It will help the Prime Minister’s image by comparison

The PM, according to No 10, was only there for nine minutes. As for the unfortunate Chancellor, he seems to have arrived towards the end of the festivities in the expectation of attending a Covid meeting.

It does not seem a very serious offence on the part of either man. Indeed, Mr Sunak’s conduct sounds blameless.

Incidentally, sharing a charge sheet with Rishi is to Boris’s advantage. For who can doubt that the teetotal Chancellor is a restrained and well-behaved individual who is not in the habit of throwing caution to the wind and partying at all times of the day and night?

Note, too, that one of those recently fined by the Metropolitan Police over the Partygate affair was Helen MacNamara, a senior civil servant who was in charge of ‘propriety and ethics’, no less. Is she an irresponsible and venal person? I very much doubt it.

I expect she was (she has now left government service) a decent and generally law-abiding public servant who failed to observe the sometimes blurred distinction between work and relaxation.

The main lesson I draw from all this is that never again should any British government enact extreme legislation during a pandemic, or presume to micro-manage our lives in such an overbearing manner.

It was a natural thing to want to enjoy a responsible drink after work, perhaps especially so during a pandemic, and that tolerance and understanding should have been explicitly extended to the rest of us. 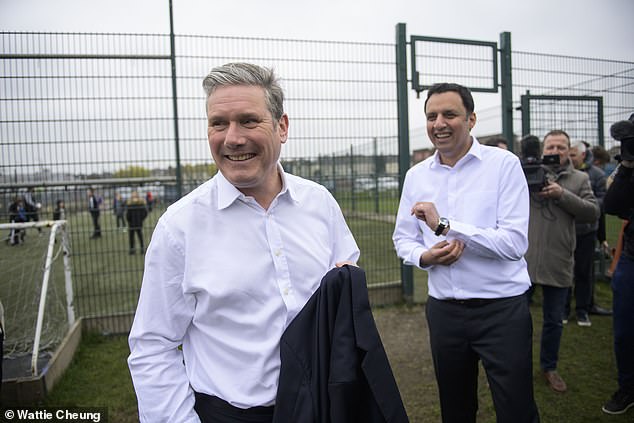 Members of Keir Starmer’s Labour party and the Scottish National Party are clamouring for Boris Johnson to resign after he confirmed he had paid the police fine. But should he?

In short, Boris Johnson and Rishi Sunak were behaving in a human way. If this case causes them to reflect on the excessive severity of the restrictions which they and other ministers promulgated, that for me would be a very desirable outcome.

What should happen now? The Prime Minister may possibly face further penalties from the Metropolitan Police in respect of other parties at No 10.

It is a very unsatisfactory state of affairs — in the midst of a major war — to leave the Government (and therefore the country) in a state of suspension.

Why can’t the Met make up its mind and bring this saga to a conclusion? Who, following the departure of Metropolitan Police Commissioner Dame Cressida Dick, is making the decision to drag out this investigation in a way that is not only injurious to Boris Johnson, but could damage British interests at a time of war? And why focus first on a relatively innocuous party?

None of us knows what may happen in Ukraine, but there is a danger of a wider European conflagration in which this country will be involved.

To obsess about Partygate at such a time, while the Prime Minister’s enemies are shrieking for his scalp, is a sign of a trivial country with a warped sense of priorities. How Putin must be chuckling. 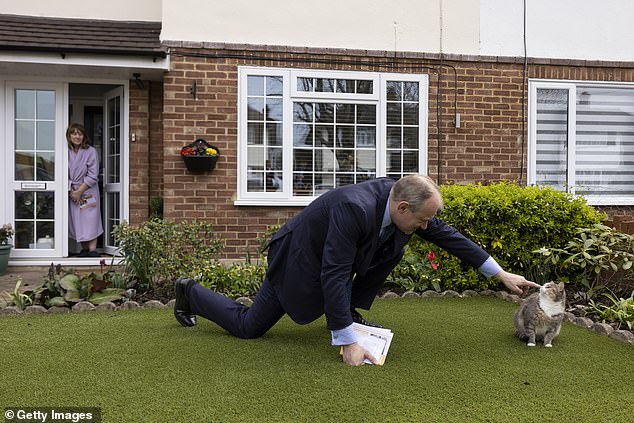 Liberal Democrat leader Ed Davey attempts to stroke Mikee the cat after speaking with resident Kate Allden, while canvassing ahead of the local elections

Nonetheless, I hope this sorry episode makes the Prime Minister reflect on his behaviour.

Not for the first time in his life, he has been careless and undisciplined. He will face plausible accusations that he misled Parliament when he said that no rules had been broken in No 10. That turns out not to be true.

Boris Johnson rightly apologised yesterday. For his own and his party’s good, and in the interests of good government, he should convey even deeper contrition for what went on. And then let us at long last move on — and pray that there will be no repetition.