Unlike Norman Lindsay’s creation, that cantankerous pudding named Albert, the Victorian budget is not magically replenished every time its keepers tuck in for a helping of steak and kidney pie or plum duff.

It is a political cliche, but Victoria’s battered finances will eventually need to be actively repaired, either through higher revenue (including taxes), lower spending, or a combination of both. 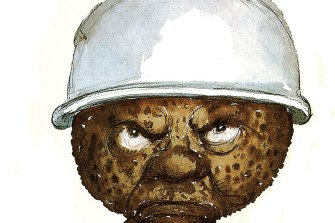 Norman Lindsay illustration of Albert the Pudding from classic childrens book The Magic Pudding. Unlike the pudding the budget doesn’t automatically replenish.

Or is there a third way? If you believe the Andrews government’s latest forecasts, then the answer is, “perhaps”.

In an interview with The Age last week, State Treasurer Tim Pallas insisted the government will not be balancing the books through austerity, warning this would do more harm than good by hitting communities that have already done it tough.

Having already imposed a range of new taxes over the past seven years, the government isn’t ruling out new ones. But according to Pallas, the Government will not be raising taxes “simply for the gratuity of it”.

“I think our record is pretty clear; we have reduced as many taxes as we have increased,” he said. 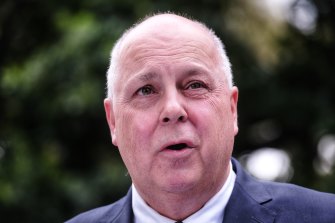 Tim Pallas says the government has reduced as many taxes as it has increased.Credit:Luis Enrique Ascui

So, rather than cutting or taxing, the government is betting the economy will grow its way out of financial trouble – just as it gears up to fight the 2022 election. It is an optimistic strategy. It is also fraught with financial and political risk.

When the government delivered the budget in May it was predicting the state economy would rebound by 6.5 per cent this financial year, before growing 3.25 per cent the following year.

That was dramatically derailed when the Delta strain crashed in, plunging Victoria into a crushing lockdown that would bring the state economy to a grinding halt. 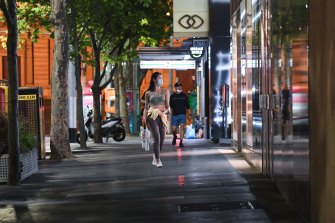 The government’s budget predictions were derailed by the outbreak of the Delta variant.Credit:Joe Armao

Seven months later, Treasury is once again optimistic. This time it reckons Victoria will return to the same growth path it mapped out in the May budget, although the peak will be reached about 12 months later than first thought. Blame Delta for that.

In its mid-financial year budget update, released last week, it predicted growth will hit 4.5 per cent next financial year.

The thinking (perhaps “hope” is a better word) is that the “stellar bounceback” will pad the bottom line with billions of dollars of extra revenue from stamp duty, payroll taxes and land taxes, allowing the budget to gradually arc back to surplus over time.

If you want a sense of how risky this strategy is, turn to page 159 of the budget update. Buried in Appendix D is Treasury’s “sensitivity analysis” – a section where a bunch of smart people use a big computer to assess the various risks to the Government’s forecasts.

High among them is the risk that the world economic recovery is undermined by the emergence of a vaccine resistant COVID-19 strain.

Having blown up Treasury’s predictions once this year already with the emergence of the Delta strain, could the new Omicron strain be about to do it a second time?

But if global growth turns out to be just 1.6 per centage points lower in 2022 than expected because of the emergence of a vaccine resistant strain, the impact on the state economy and the budget could once again be significant, particularly if it delays the return of overseas students and tourists.

This would in turn slice about $1.1 billion from the bottom line, compared to Treasury’s more optimistic “base case”.

That would leave the state with an extra one billion dollars of extra state debt by mid-2025, even before factoring in other spending that would likely be needed to insulate the economy.

The problem for the Andrews government is that after two years of pandemic, it has very little wriggle room left.

Victoria already has one of the highest tax hauls as a proportion of the economy in the nation, equivalent to about 5 per cent of the state economy.

By the middle of 2025, Victoria’s net debt – which represents the accumulated impact budget deficits – is expected to have reached almost $163 billion, equivalent to 27.9 per cent of the state economy. That’s double the prediction for NSW.

And that’s the optimistic scenario. Plum duff, anyone?