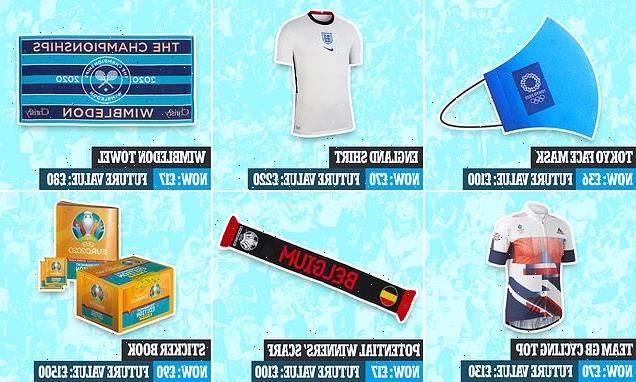 How much could YOUR England shirt be worth? Experts say collectors will snap up memorabilia from the 2020 Euros, Olympics and Wimbledon for three times the original price because the events didn’t go ahead as planned

Sporting tournaments postponed by the pandemic could actually make the merchandise associated with them future collectors items.

Those who were canny enough to pick up a cut-price shirt last summer, when the world went into lockdown might find they can enjoy even bigger margins as the years roll by.

UEFA knocked 15 per cent off all products promoting the tournament last year and confirmed this year that the tournament would still be named Euro 2020, despite the European football spectacle taking place in 2021. 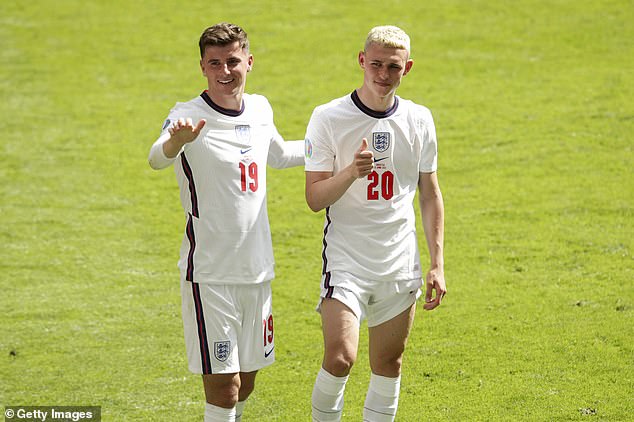 Hang on to that kit! Euro 2020 football shirts are likely to be more enticing for future collectors because they carry last year’s date but the pandemic meant the tournament took place a year on (Mason Mount and Phil Foden of the England football squad)

REVEALED: WHAT YOUR PANDEMIC MERCHANDISE COULD BE WORTH IN FUTURE 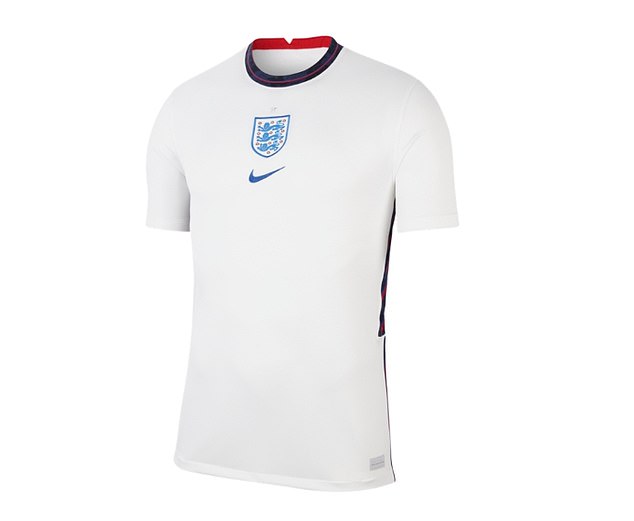 At the time of the last year’s postponement of the Euros, UEFA had already sold a great deal of tournament merchandise and a name change to Euro 2021 would have reduced the value of the items, despite it being more a factually accurate name.

As a result, items such as t-shirts, jumpers, scarves and shorts all still carry a Euro 2020 logo. In order to avoid a clash with the men’s tournament, the Women’s European Championships in England were moved from the summer of 2021 to July 2022.

It is believed the women’s tournament will also keep its name despite the 12-month postponement.

Wimbledon, which starts on Monday, was cancelled entirely last year, with souvenirs emblazoned with the 2020 being donated to charity or sold off cheaply.

However, antiques experts say that owning one of the tennis tournament’s famous towels carrying last year’s date – currently on sale for a snip at £17 – could be a shrewd investment. 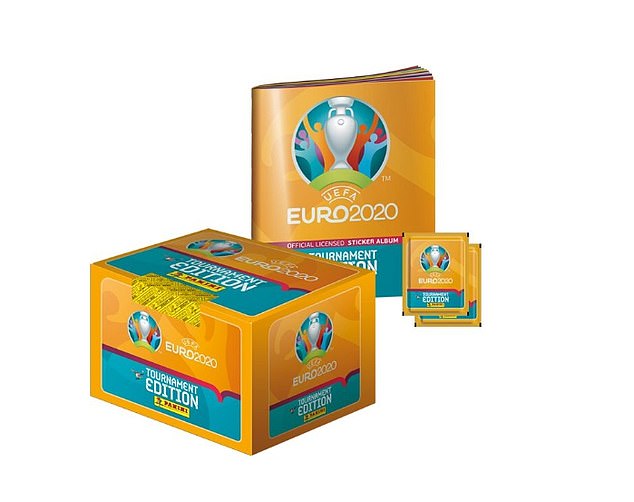 Get those swaps in: A Panini special edition Euro 2020 sticker book currently costs £90 but might have a future price tag of up to £1500 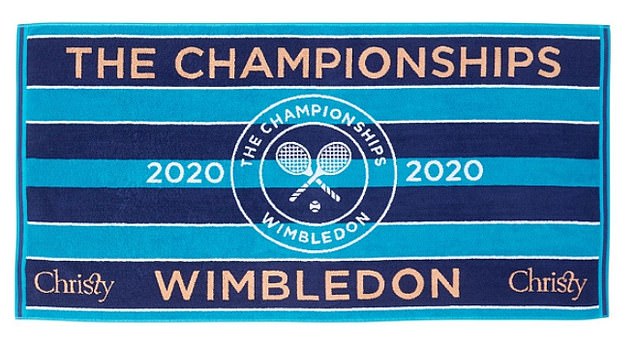 While Wimbledon gave away much of its 2020 merchandise after the pandemic cancelled the tournament, you can still snap up a cut-price official 2020 towel for just £17 – but it will be worth as much as £80 in a few years’ time 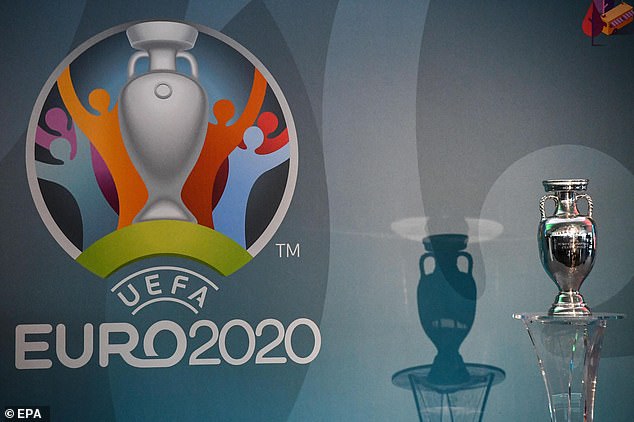 Will Thomas of LoveAntiques told FEMAIL that quirks such as typos in famous books have historically seen prices inflate – and it could be no different with the sporting memorabilia affected by the pandemic.

The spokesperson for the online antiques marketplace said: ‘As with all collectibles and memorabilia, the rarer or more unique the item the better. That’s why mis-prints or faulty versions of books, vinyls and clothing can often eclipse their correctly-made counterparts.

An official Tokyo mask isn’t cheap now – at around £36 – but the pandemic necessity could be worth quadruple the amount when history looks back on sporting tournaments affected by Covid.

Meanwhile, an England Euro 2020 football shirt currently retails at around £70 to £80 but could be worth as much as £220 in years to come.

And if the current favourites, Belgium, do end up lifting the trophy, a humble football scarf that costs £17 now will spiral to around £100, say the experts. 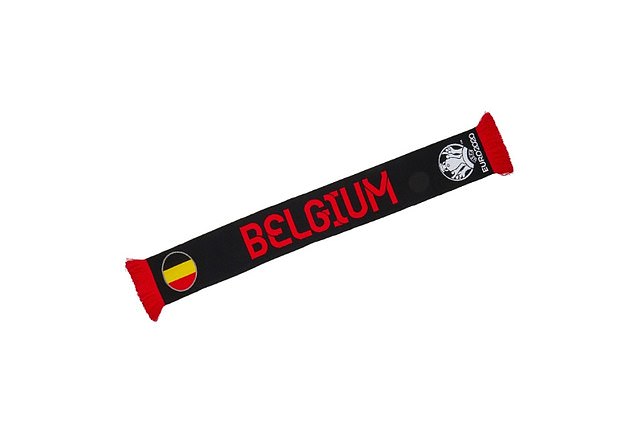 Belgium are still favourites to lift the Euro 2020 trophy – and if they do, a scarf that costs £17 now will spiral to around £100 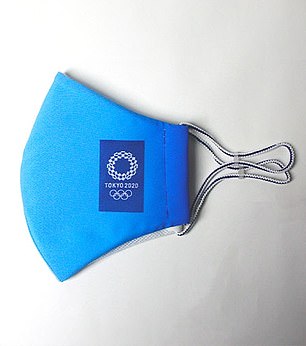 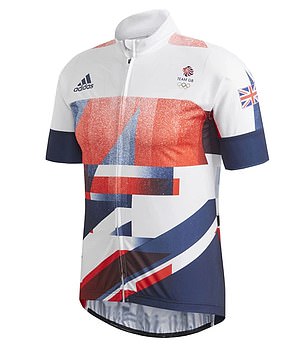 An official Tokyo match isn’t cheap now – at around £36 – but the pandemic necessity could be worth quadruple the amount when history looks back on sporting tournaments affected by Covid. Team GB will field a cycling team wearing the above shirt…but it could be worth much more once it takes its place in the history books

‘This trend is something which is almost certainly going to impact the value of collectibles from the previous 18 months in years to come – whether it’s an item from Euro 2020, last year’s Wimbledon, or the Tokyo Olympics – I’d be extremely surprised if these items don’t increase in value.’

They added: ‘With every type of antique and vintage item, it’s all about the perceived importance of a product – for example, a 1996 England Euros match shirt with Paul Gascoigne on the back is always going to be worth more than the same shirt with Steve Howey on the back (for obvious reasons).’

Collectors are increasingly desperate to find interesting and unique versions of items, they say, so the products born in probably the most unprecedented period of time since the Second World War, will have a higher perceived value then a product from a less turbulent era.

‘If you look at some of the most iconic collectibles, like old Beatles vinyls and Harry Potter first editions, the ones which are often valued the highest are ones which contain mistakes, or that come from a recognisable time in an artist, author or designer’s life.’