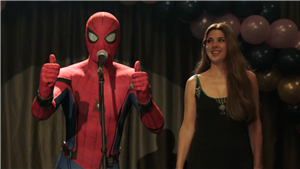 While Spider-Man fans are still reeling from the recent report that the franchise is leaving the Marvel Cinematic Universe, Sony has decided to try and set the record straight. Sony’s statement about Spider-Man leaving the MCU claims the news has been "mischaracterized" — and left the door open to working with Marvel once again in the future.

In a statement obtained by Bustle (which they also shared on Twitter), a Sony Pictures spokesperson explained, "Much of today’s news about Spider-Man has mischaracterized recent discussions about Kevin Feige’s involvement in the franchise. We are disappointed, but respect Disney’s decision not to have him continue as a lead producer of our next live action Spider-Man film." (Bustle also reached out to representatives for Disney, Tom Holland, and Marvel for comment.)

The statement continues, "We hope this might change in the future, but understand that the many new responsibilities that Disney has given him – including all their newly added Marvel properties – do not allow time for him to work on IP they do not own." Sony ended their statement by praising Feige and his work, and acknowledging the influence that he and the MCU have had on the Spider-Man franchise over the past few years. "Kevin is terrific and we are grateful for his help and guidance and appreciate the path he has helped put us on, which we will continue," the studio wrote.