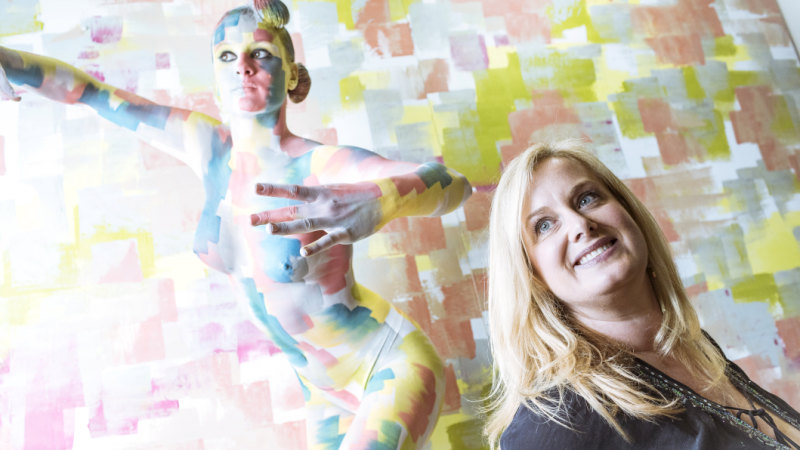 Melbourne musician Gotye found worldwide success with his 2011 single Somebody That I Used To Know.

But the song's unique video clip, which has him being painted in earthy-coloured, tessellated shapes until he blends into the wall behind him, also did wonders for somebody else's career.

Body artist Emma Hack, who is in Melbourne this week for the Affordable Art Fair, says her work on the music video catapulted her profile internationally, making her one of the only body artists in the world to crack the fine art market.

The Adelaide-based artist held her first solo show in New York in the months after Gotye's single was released. She has since gone on to host exhibitions all around the world, from Canada to Dubai.

Hack usually opens an exhibition with a live body-painting performance, and exhibits and sells photographs of models she has previously painted.

She says the Gotye clip boosted sales of her work because it showed people the process of body painting. 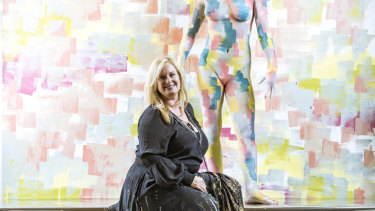 Hack will perform a one-off show on Thursday night at the Affordable Art Fair.Credit:Chris Hopkins

"[Before], people had no idea what they were looking at, whereas after seeing the video they'd see the whole application method," she says.

"It was a fantastic way to showcase what I do. I think a really large amount of people had never experienced body art … it went from being seen as a more alluring and gratuitous style of art to one with a more artistic edge."

The sensual aspect of body painting is not something Hack, who predominantly paints women, shies away from. She says the female body's curves "add another element and allow new forms to be created within the art".

The women she paints are not usually completely nude but wear a G-string. "It's an art performance, but there's still a few rules these days and I'm pretty protective of my models," she says.

Hack will perform a one-off event called Be Still on the opening night of the Affordable Art Fair, which has its first Australian outing in Melbourne from Thursday to Sunday.

Held in cities around the world for 20 years, the fair was created with the vision to "democratise" art, offering high-quality works from $100 to $12,000.

The Affordable Art Fair is on at the Royal Exhibition Building, Carlton, until Sunday.