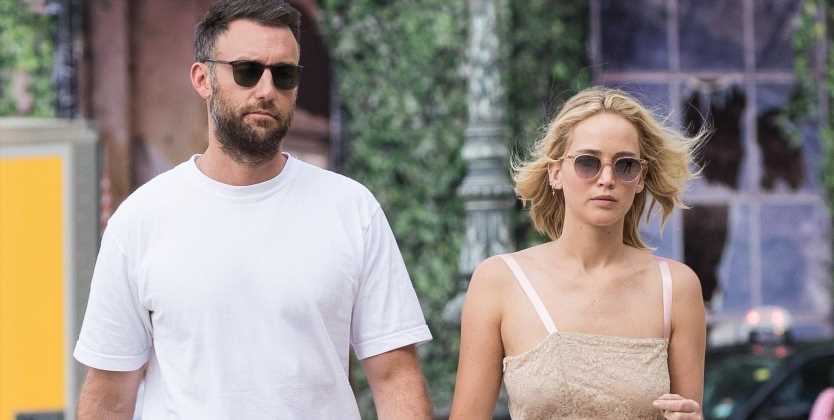 In case you haven’t noticed due to the fact that she’s super low-key, Jennifer Lawrence has a husband, whom she married back in 2019, and a baby, whom she welcomed with said husband just over two years later. And unlike her previous boyfriends (e.g., Chris Martin, Nicholas Hoult, and Darren Aronofsky), her husband’s not famous. Like, not even tangentially. In fact, Cooke Maroney—man with an extremely solid first name—is a total normal like the rest of us. Gasp!

So…who exactly is J. Law’s hubs? We’ve rounded up all the deets you gotta know about Cooke, including what he does, how he and Jennifer first met, and why he *maybe* has beef with Emily Ratajkowski. Let’s get into it.

He Grew Up on a Farm

A truly deep internet dive led us to discover Oliver Hill Farm in Leicester, Vermont, which is owned by Cooke’s parents, James Maroney and Suki Fredericks. According to a Medium profile from 2015, Mr. Maroney was an art dealer in Manhattan—and held a tenure as the senior vice president and head of American Paintings at Christie’s—before he and his wife started the farm, which is where Cooke grew up. So! Cute! (You can even spend the night in their guest house by booking it on Airbnb. You know you want to.)

Additional fun fact: He may have grown up on a farm, but Cooke was apparently always trendy. He was even voted “best dressed” by his Middlebury Union High School classmates, per this yearbook snapshot unearthed by the Daily Mail. Just peep that Abercrombie graphic tee and baggy jeans!

He Works in the NYC ~ArT SceNe~

After high school, Cooke studied art history at New York University, and then he decided to follow in his dad’s footsteps by taking a job at Gagosian, an art gallery owned and directed by Larry Gagosian. He now holds a job as a director at Gladstone 64, which is the Gladstone Gallery’s Upper East Side location (and for those of you who don’t live in NYC and/or watch Gossip Girl, that is a *very* fancy area). Apparently, this dude reps several famous art clients, including Lena Dunham’s dad, Carroll Dunham!

He Met Jennifer Through a Mutual Friend

Back in May 2018, not long after J. Law called things off with director Darren Aronofsky, she reportedly met Cooke through her BFF, Laura Simpson. “The relationship has been going on a few weeks,” a source told Page Six at the time. “But they have been very private and careful not to be seen together.” If the name Laura Simpson sounds familiar to you, it’s probs because she was Jennifer’s date to the 2014 Oscars.

They Tied the Knot After Just Over a Year of Dating

Engagement rumors first started circulating in February 2019 when J. Law was spotted out and about with a ring on *that* finger, and not long after, her rep confirmed the happy news.

He *May* Have Caused a Rift Between J. Law and EmRata

As you may recall, Emily Ratajkowski penned a tell-all essay for The Cut, published in September 2020, where she revealed how artist Richard Prince had taken one of her nude IG photos and printed it on a large canvas, which was later sold for a hefty sum—all without her consent. She came across the print by chance at the Gagosian in 2014 (where it was on display as part of Richard’s New Portraits series), and when she tried to buy the piece, she was told that a “big-time collector” had already claimed it for himself.

“I knew of the gallerist through a bunch of different people and had met him once or twice, so it didn’t take long to find out what actually happened to the piece,” she wrote. “The giant image of me was hanging above the couch in his West Village apartment. ‘It’s kind of awkward,’ a friend of mine said, describing the painting’s placement in the gallerist’s home. ‘He, like, sits under naked you.'” Emily never revealed the name of the mysterious gallerist who bought the piece—though apparently, some fans *think* the mystery man could be Cooke.

Cut to June 2021, when an anonymous source told celeb gossip guru DeuxMoi about an apparent feud between J. Law and EmRata. “Can 100% confirm the Emily Ratajkowski/Jennifer Lawrence mini-feud is for real,” the source claimed. “I know people in their immediate social circle and under no circumstances are they to be invited to the same gathering. Jennifer is super annoyed and embarrassed that Emily indirectly named her husband Cooke Maroney as the guy that had her nude. Everyone in the art world read it and knew it was him too.” Uh…

Oh, and side note: Emily and Cooke share a mutual friend, Sarah Hoover, who has worked at the Gagosian (where Cooke also worked for years) since 2007, so she could possibly be the “friend” of Emily’s who peeped the portrait in the gallerist’s West Village apartment. However, neither Cooke nor J. Law have ever commented on the rumored drama, so…¯\_(ツ)_/¯.

But his account is private. Go ahead and try to follow Cooke if you wanna, but don’t expect him to approve the request if your username is JenniferLawrenceFan4Eva. Godspeed.

He Recently Became a Dad

ICYMI, Cooke and Jennifer are officially parents. News of J. Law’s pregnancy first broke in September 2021, and in February 2022, they welcomed their lil bundle of joy…though ofc, fans still don’t know the sex of the baby or the exact date of birth.

Chances are that Jennifer will continue to keep her romance with Cooke on the down-low but here’s hoping they continue to live their best life away from the limelight.