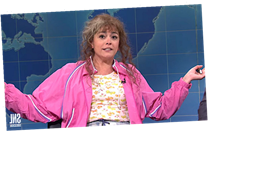 “Saturday Night Live” tackled the storming of the Capitol with words of wisdom from Cecily Strong’s character Cathy Anne on “Weekend Update” — and in a sketch about surprise participants in the attack.

A semi-addled drug-imbiber but sometimes straight-talking Cathy Anne (who likes to scream outside Michael Che’s window) has a solution to stopping insurrectionists.

“Hello! Put ’em in prison!” she told Che. “That’s where they should be, right? They’re Nazis. Actually, I think they’d like it. Prison’s got all the things white supremacists love: Other white supremacists, drama, loungewear and chicken fingers … There, I solved it.”

Cathy Anne’s not a big believer in white supremacy. “Whenever I wake up in a dumpster behind Ikea, I never think, ’Wow, score one for the master race,” she said.

In the “Pandemic Game Night” sketch, apparently dutiful white suburbanites turn out to have participated in the Capitol attack. Among the gamers: the QAnon shaman and the guy who carried off House Speaker Nancy Pelosi’s lectern.

Check it out here: