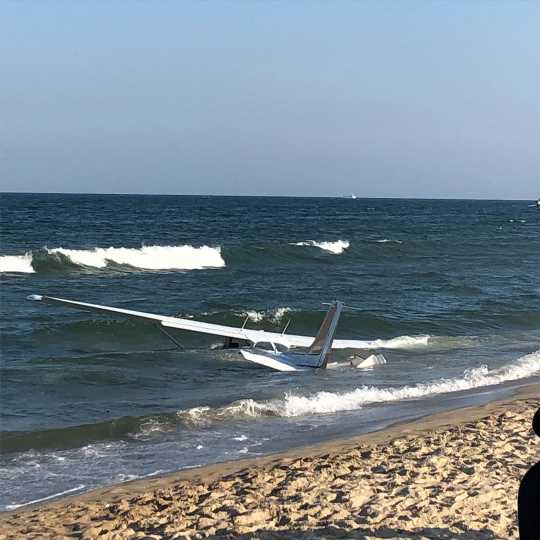 Maryland authorities are investigating after a small plane crashed into the water near a beach in Ocean City, Maryland, on Tuesday, PEOPLE confirms.

An Ocean City police officer just happened to be on the beach and saw the single-engine airplane skid into the shallow water around 6:19 p.m. local time, Ashley Miller, a spokesperson for the Ocean City Police Department, told PEOPLE. Only the pilot was on board, Miller said. And a witness said he swam to the shore.

“When we arrived on scene, he was on shore and our Ocean City paramedics did a preliminary check over and ended up releasing him on scene,” Miller told PEOPLE. Miller did not confirm that the pilot swam to shore.

The plane was recovered in one piece, Miller added. Footage of the crash showed the aircraft skidding near the shore before becoming partially submerged in the water.

There was no one in the water near the plane at the time of the crash, and no one else was injured. Miller said “it was a happy atmosphere” on the beach once the plane was pulled from the water.

The pilot has been identified as Trevor H. Deihl of Reedville, Virginia, according to CBS affiliate WJZ.

Several people witnessed the crash, including Charlotte Higdon, who said she heard the plane making strange noises after landing in the water.

“I happened to look up and I saw the plane coming right directly over top of us, and I said to my husband, ‘Look at that! That’s strange! It’s very close,” she told WJZ. “The engine was making a sputtering noise and there was smoke coming out of the one side of it.”

She added, “It was nuts. It’s not something you see every day on the beach.”

“The pilot did a great job, when it hit the water, he was up high so he didn’t flip over and he sailed in a little bit and I think that’s what saved him,” he told WBOC. “And he seemed like he was coming close enough to the beach, but it almost seemed like he was watching to see that there weren’t people in the water.”

Harry and Meghan worried about being eased out of Royal picture, author claims