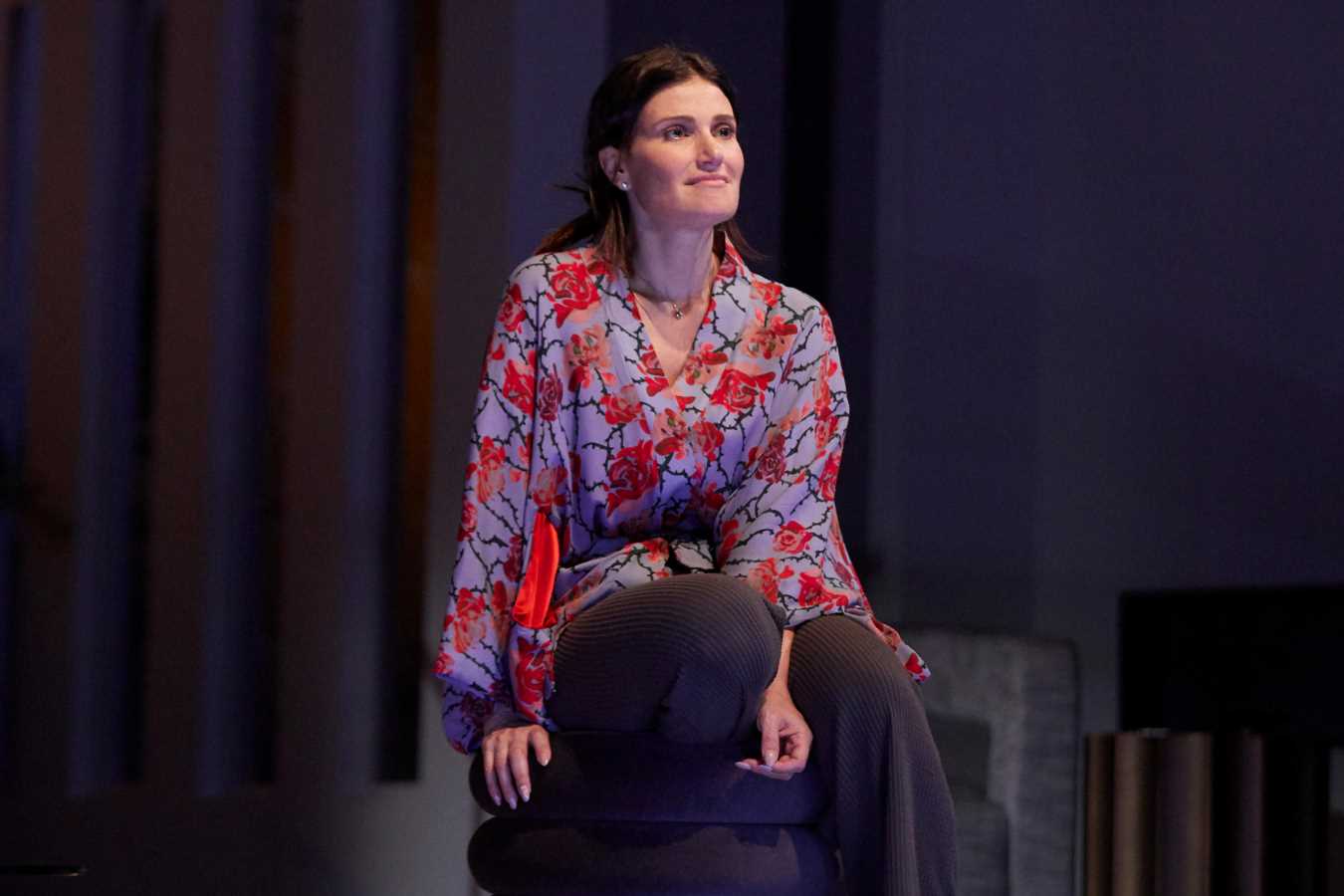 Skintight, now making its West Coast premiere at Los Angeles’ Geffen Playhouse, is an acerbic, neurotic, heart-achingly funny meditation on family, love, and beauty – and how we quantify, catalog, and value each of those things.

Idina Menzel, straight from the Broadway production, headlines as Jodi Isaac, a woman coming apart at the seams because her husband has left her for a much younger woman. When she seeks refuge at her wealthy fashion designer father’s house under the guise of celebrating his seventieth birthday, she finds herself further under duress when she meets his studly 20-year old boyfriend Trey (Will Brittain). Matters get further complicated when her son Benjamin (Eli Gelb, the only other member of the Broadway cast to make the leap west) arrives and is undeniably attracted to Trey’s nakedly displayed charms.

Menzel and Gelb anchor the production, their past experiences with the roles lending them a more lived in sensibility than their counterparts. Still, even in their hands, occasionally, playwright Joshua Harmon’s hyperkinetic dialogue can feel overly monologued and less like real human speech than it should. Their bond as mother and son is a delicious picture of modern domestic neuroticism, veering from co-dependency to genuine connection to hilarious oversharing. Gelb manages to carefully tread the line between stereotype and quivering mass of self-doubt — his exasperations, attractions, and fears channeled through his pitch perfect physical comedy that allow a hand flourish or an eye-roll to say so much.

Though she’s primarily known for her outsized voice and the hits its created in iconic show tunes like “Let It Go,” “Defying Gravity,” and “Take Me or Leave Me,” Menzel is sterling as a dramatic actress with no musical flourishes. She is vociferous in her attack, like a dog with a bone, only the bone is her waning youth and beauty. Her still palpable sense of loss at the dissolution of her marriage is etched into every line, as she struggles to use humor as a self-defense mechanism and unconvincingly reassure her father (and by extension the audience) that she has embraced the aging process – and wants him to do the same.

She maintains an even anxiety for much of the show, a fever pitch of nerves and jangling insecurities stuffed down under her attempts to piece together the broken shards of her family through her father’s birthday celebration. But her best moment comes at the second act climax where she faces off against her dad, Elliot (Harry Groener in a steadying role as the mostly rational pillar in a swirling vortex of drama).

The crux of the play explodes in their argument over lust and love, the true value of beauty, and how we make peace with the aging process while lusting after youth for reasons we perhaps cannot even name. Jodi’s anguish, the sense that she was never good enough – for her husband or her father — simmers under the surface throughout, but here Menzel unleashes it, letting loose decades of hurt as she probes a question we may never find a satisfying answer to – why does youth and beauty mean so much?

At the heart of the argument is Elliot’s new lover, Trey, brought to brilliant life by Will Brittain. With a laconic Oklahoma drawl and a body to rival any Greek God, Trey is the embodiment of Jodi’s worst fears – and Brittain infuses him with glorious life, making him at turns capricious and generous of spirit, treading the line between gold-digger and genuinely engaged lover. It would be easy to make Trey one note, a boy-toy there for the pay day, but Brittain digs deeper to tarnish his Adonis image with a well of hurt that feeds the drama with aplomb while still nailing every comedic beat he’s given.

Skintight uses its gifted cast to ask difficult questions, making cosmetic enhancements an apt metaphor for its proceedings. On its surface level, it’s a family dramedy about the type of neuroses-riddled individuals playwrights adore – and there’s a frank beauty and reward in that alone. It’s good for abundant laughs if nothing else. But as it pulls its characters taut, stretching them to their breaking points, it crosses the line from something merely nice to look at into something more garish but true – a distorted meditation on love gone wrong in a youth-obsessed culture, one that might force us to do some of our own looking in a mirror. B+