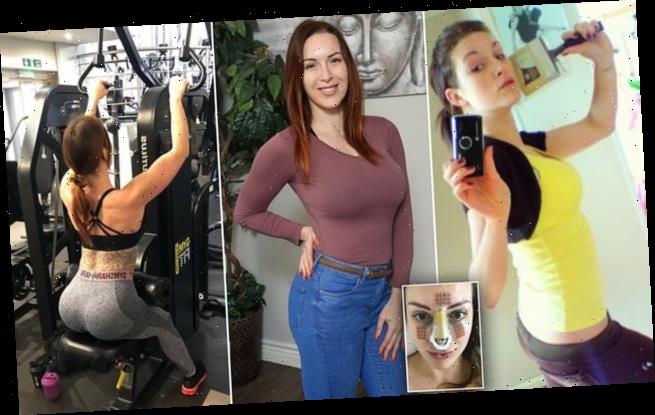 Single mother who’s racked up £38,000 credit card debt on ‘mummy makeover’ surgery including a butt lift and a designer vagina claims it’s no different to paying off a mortgage or university fees

A single mum has racked up a £38,000 debt after undergoing 15 years of surgeries and giving herself a ‘mummy makeover’.

She’s also had non-surgical tweaks, including mole removal, Botox and lip fillers, pushing her cosmetics bill up to a massive £45,100.

The personal trainer – who saved just £7,100 towards the procedures –  says she spreads the costs of cosmetic procedures over two credit cards but insists her debt is no different to repaying university fees. 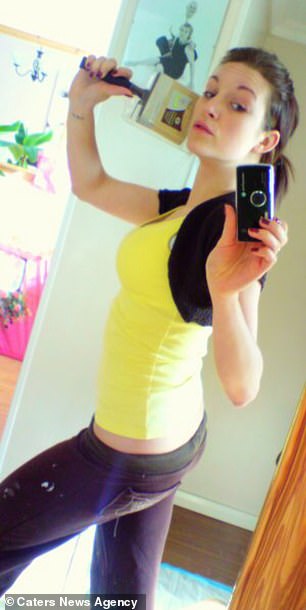 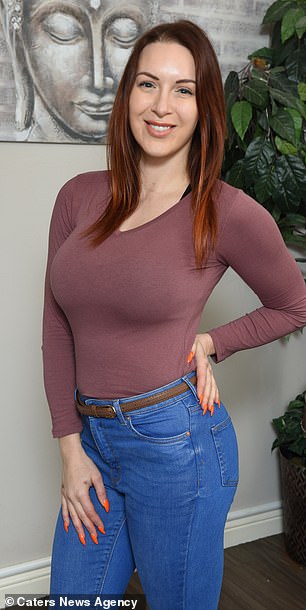 Tracy Kiss, 32, from Aylesbury, Buckinghamshire, has undergone three boob jobs, a Brazillian butt lift with implants, laser eye surgery, nose job, and even a designer vagina. She’s also had non-surgical tweaks, including mole removal, botox and lip fillers, pushing her cosmetics bill up to a massive £45,100. She is pictured left aged 18 before any surgery, and right now following several surgeris 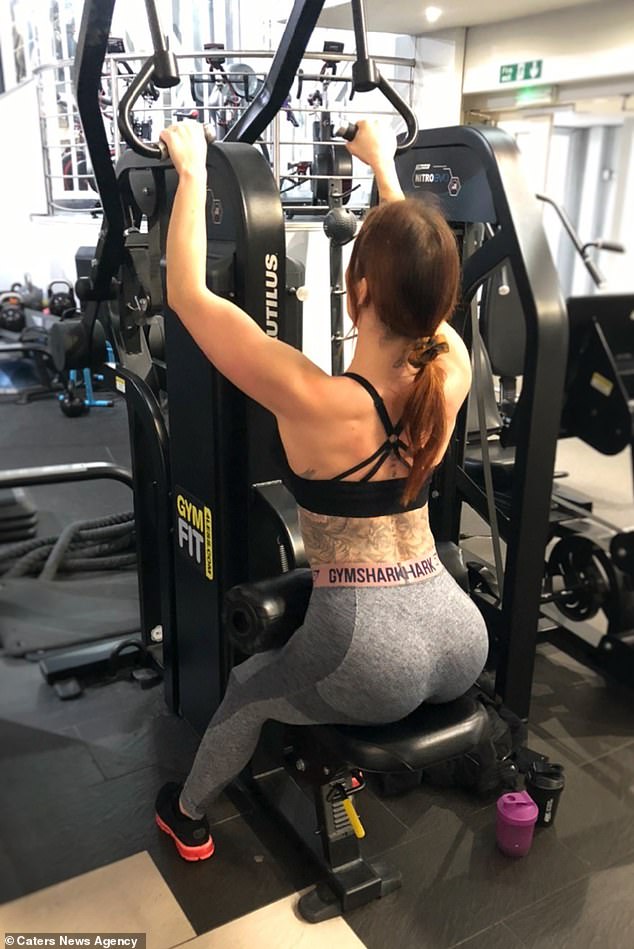 Tracy, a personal trainer, working on her surgically enhanced ‘mum bod’ in the gym. She says she has sacrificed her social life and avoids splurging on materialistic items to ‘improve her mum bod’ through cosmetic surgery

Tracy, has sacrificed her social life and avoids splurging on materialistic items to ‘improve her mum bod’ through cosmetic surgery.

She said: ‘I don’t see my surgery bills as debt – it is just like repaying university fees or a mortgage except my quality of life is better.

‘I am not scrimping and scraping like people who own a house.’

‘I enjoy getting surgery, but it isn’t always vanity. I needed to get a nose job as I had a deviated septum, I was breathing out of my mouth for years.

Price breakdown of Tracy’s treatments since 2005

Salary earnings from job as a personal trainer

Salary earnings from job as a personal trainer

‘When I returned, I started getting regular Botox, plus lip, cheek, jaw and under-eye fillers, spending around £1,000 a year.

Tracy added that her mum helps her look after her children while she’s recovering from the surgeries, and that she has no regrets despite her debt.

She said: ‘Some mums may be put off going under the knife, but there is a risk with everything we do, so I chose not to live my life in fear.

After breast feeding her two children Millie, 12 and Gabriel, eight, as babies, Tracy’s breasts became droopy despite having 30FF implants.

She said: ‘They were covered in stretchmarks with next to no natural breast tissue or my own, aside from my silicone implants.

‘Rather than having an uplift and facing additional scarring and more invasive surgery, I decided to opt for larger implants for £5,000 in Turkey, which was a bold move but a decision that I’m so pleased I made. 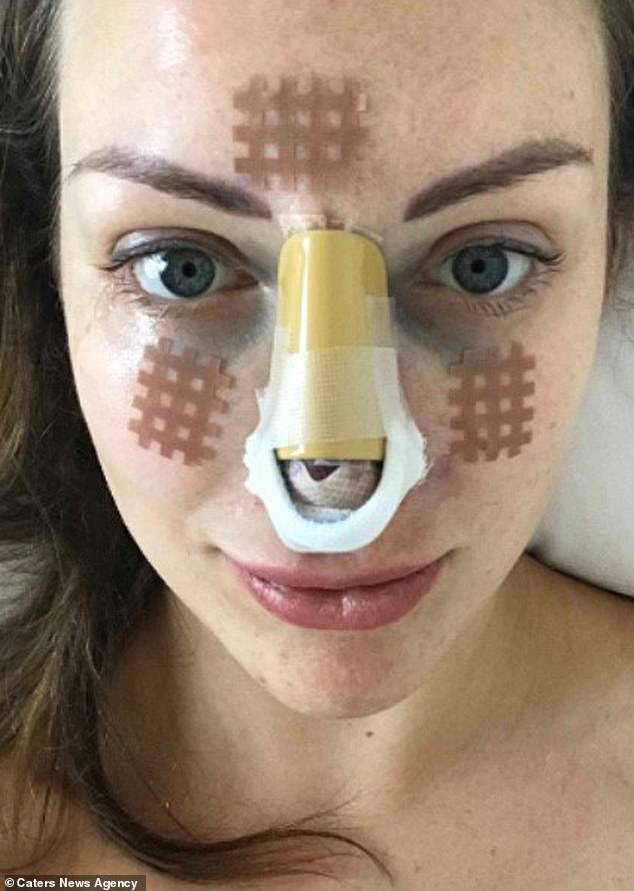 Tracy, pictured after having her nose job, says she got the rhinoplasty to improve her breathing

Tracy, pictured left before her Brazilian bum lift, and right after, spent £7000 on the surgery

‘I had my breasts done to fit my height and size perfectly, allowing me to remain a slim dress size whilst having curves that I couldn’t naturally achieve.’

At 18, Tracy had her first boob job as her natural 30A/30AA breasts were ‘asymmetrical’ but she later discovered they were PIP implants, a type of silicone which was withdrawn from the UK market in 2010 after it was found they had been fraudulently manufactured with unapproved gel.

Her breasts weren’t the only thing she felt self-conscious about after children, she ‘adored’ being a mum but ‘hated’ what it had done to her body.

She said: ‘At 29, I started to become self-conscious about my vagina – I hated how it looked after giving birth. 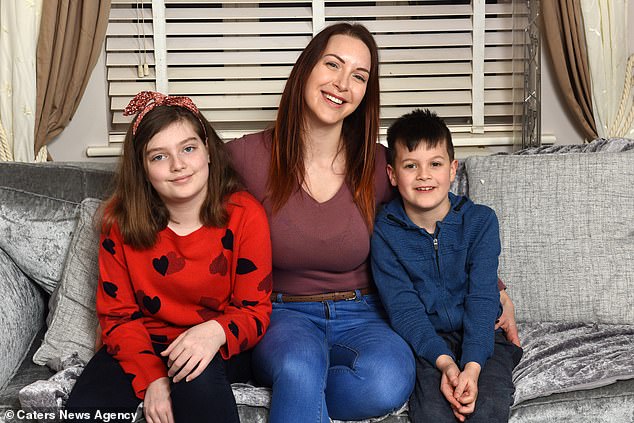 Tracy and her two children, Millie, 12 and Gabriel, eight. She insists  that her surgery bills are no different to paying a mortgage 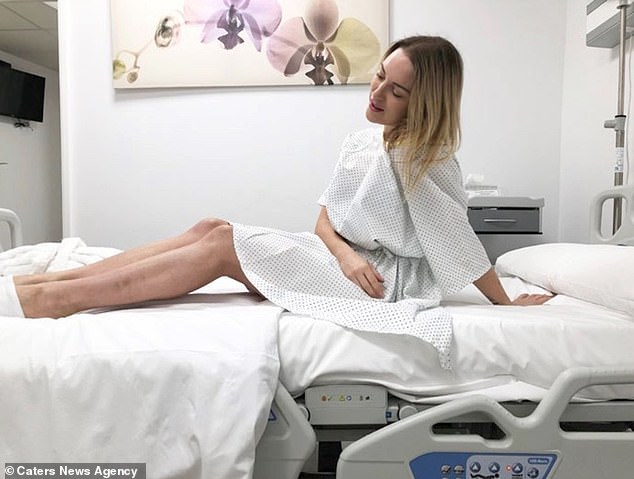 Tracy pictured in hospital following her surgery, she says her mother helps her look after her children while she’s recovering 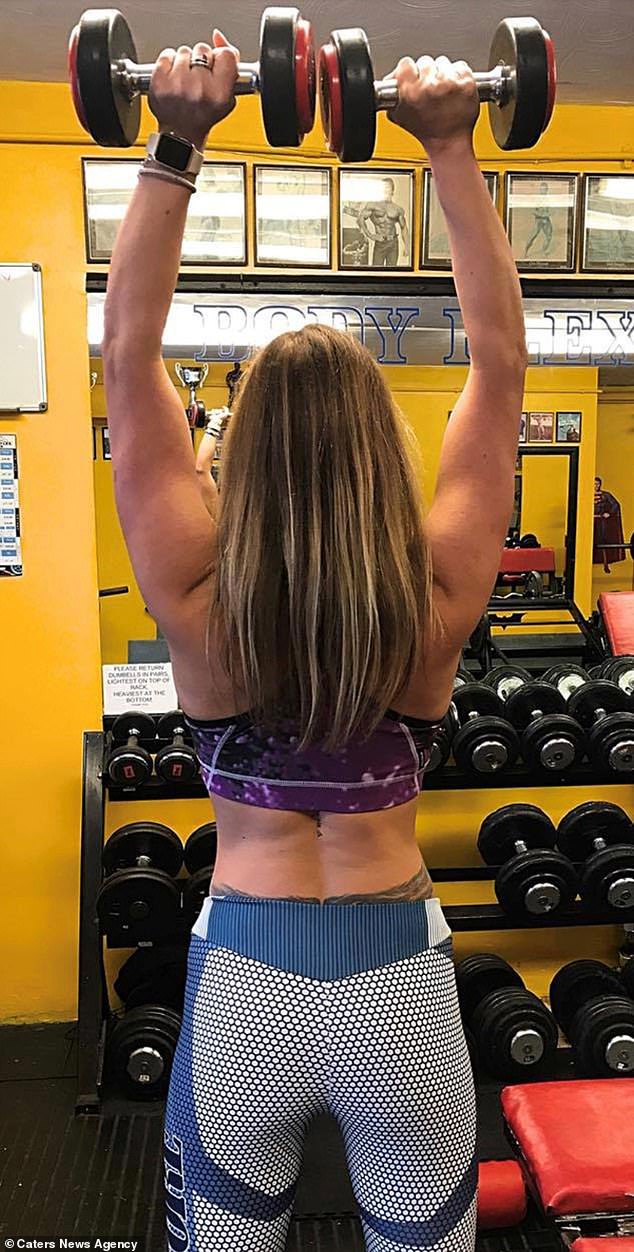 Tracy, a personal trainer, in the gym before her Brazilian bum lift

‘I spent £4,000 on a designer vagina, spreading the cost across two credit cards.

‘I had to have a therapy session to check I was mentally prepared for the hour-long op, and during the gruelling six weeks’ recovery my mum helped looked after the kids.’

Keeping up with the latest surgery trends, she had a Brazilian butt lift with implants for £7,000 in 2018.

Tracy cuts back on ‘partying and holidays’ to ensure she can pay monthly installments of £400 off her credit cards.

Tracy is pictured left after all her surgery, and right before her latest breast enlargement and nose job 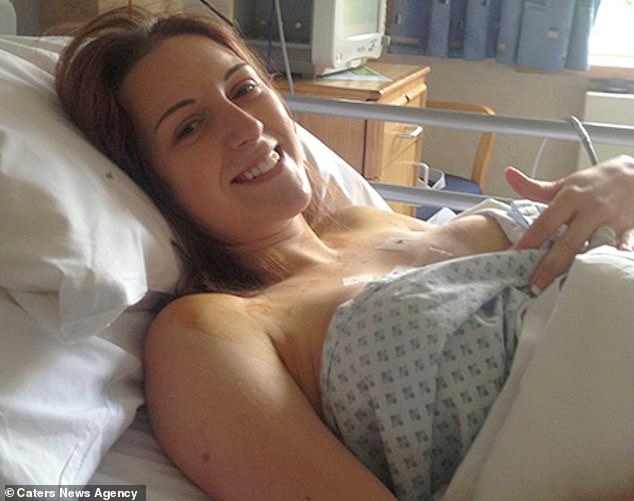 Tracy, pictured in hospital following her boob job. She has had three surgeries, enhancing her 30AA natural breast to a 30KK 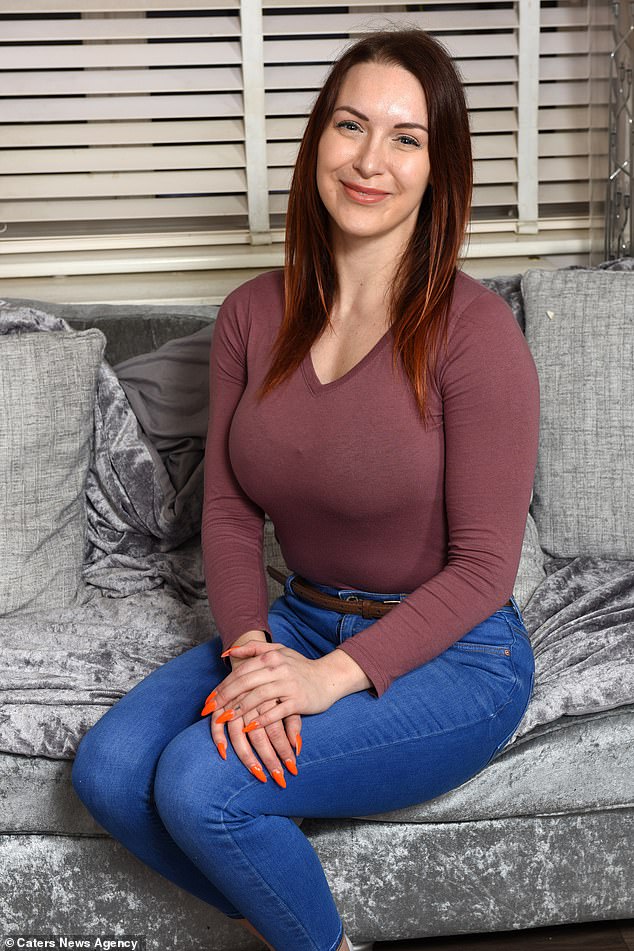 Tracy cuts back on ‘partying and holidays’ to ensure she can pay monthly instalments of £400 off her credit cards.

She said: ‘My children come first over all else, they’ve never gone without I make sure of it.

‘They are my first and foremost priority – whatever is left after providing for them I allocate to myself.

‘My life isn’t extravagant; I have a 2012 Nissan and I rent my home, but I am not living on the breadline.

‘I don’t go on fancy holidays or party on a weekend – I spend on cosmetic surgery instead.

‘When people travel, they only have memories whereas I have changed my look for a lifetime, so it is totally worth it.’ 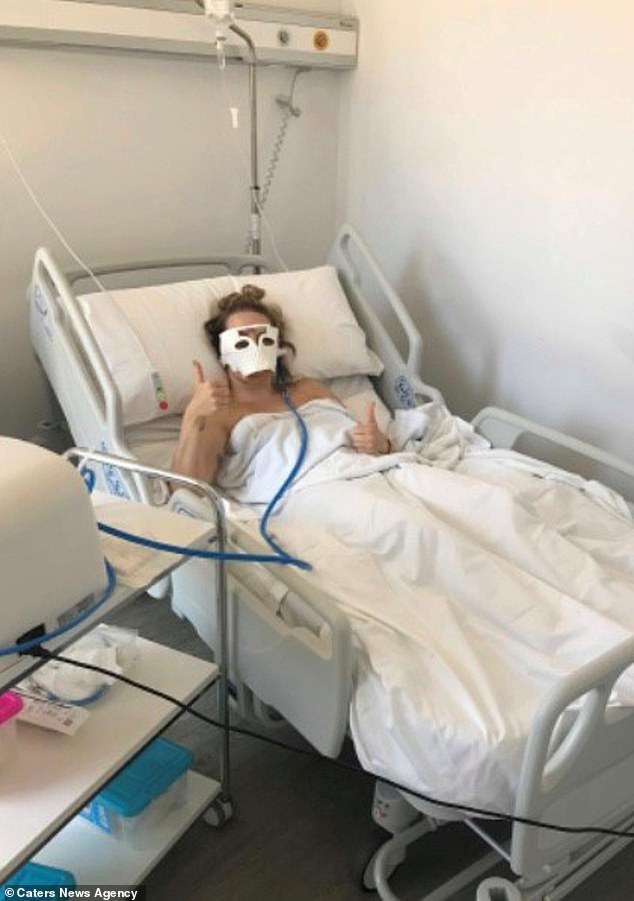 Tracy is pictured in hospital after having her nose job. She insists surgery has ‘improved’ her quality of life and compares her credit card debt to paying off a mortgage or car. 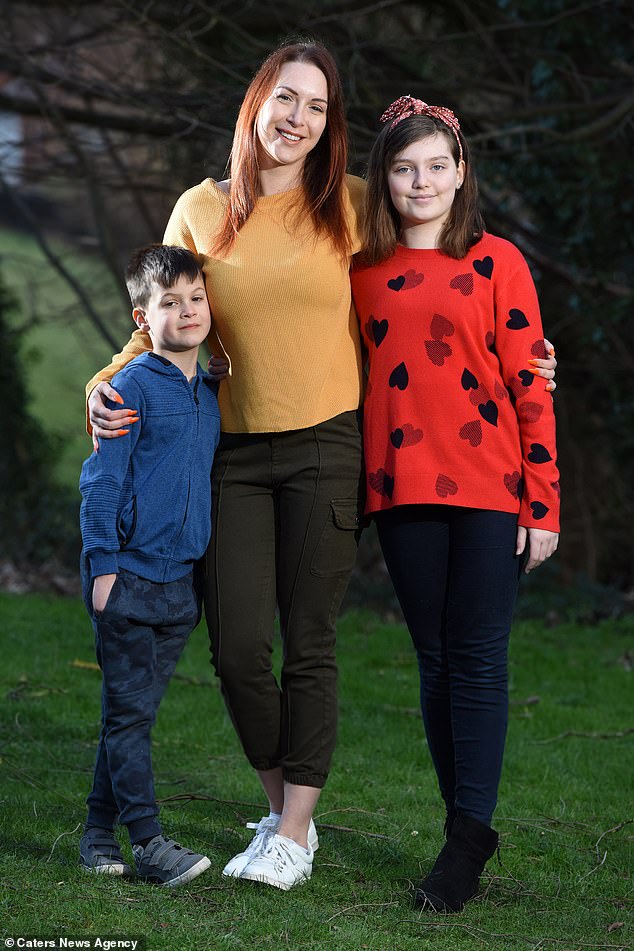 Tracy and her two children, Millie, 12 and Gabriel, eight. She says some of her surgeries are to help eyesight and breathing

Tracy had issues with her vision as she was short-sighted but to avoid spending money on glasses which her children Millie, then five and Gabriel, then one, may break – she underwent laser eye surgery twice costing £5,000.

She insists surgery has ‘improved’ her quality of life and compares her credit card debt to paying off a mortgage or car.

‘I also needed to have laser eye surgery as I was squinting all of the time and when I wore glasses, my children would pull them off my face and break them.

‘It made more sense to get laser for 20/20 vision rather than buying glasses every few months.

‘I pay for the surgeries on my credit card, but I see it as a positive as my credit rate is great.’