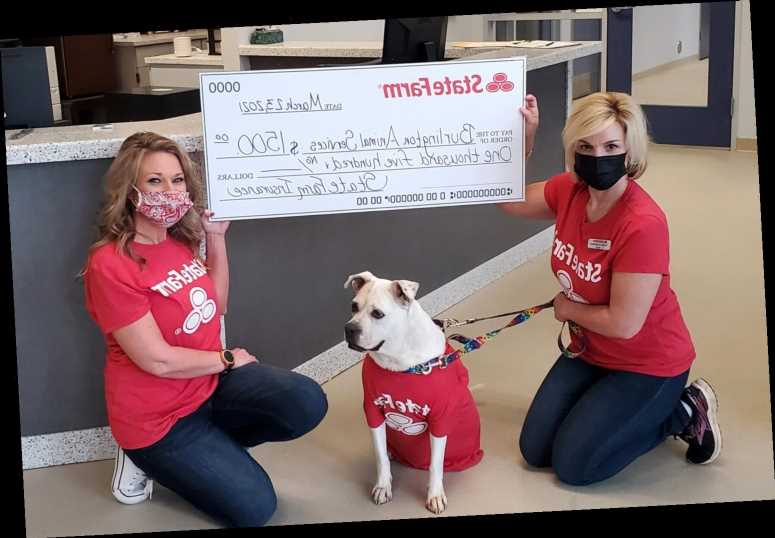 "Jake from State Farm," an unlucky shelter dog who captured the internet's heart, has found his forever home — with the support of his namesake insurance company.

The 8-year-old pup was adopted from a Burlington Animal Services shelter in North Carolina last week after a string of bad circumstances landed him at the facility four times over the past three months.

Photos of Jake playing outside in a red State Farm T-shirt went viral on Facebook, attracting fans ranging from Rhode Island to Colorado who offered to adopt the pup — including State Farm insurance agents! Kim Murray, who lives in nearby Hillsborough, North Carolina, with two older dogs, adopted Jake.

"He landed in a good, loving home, and Kim will, without a doubt, take great care of him," Laura Michel, a program coordinator for Burlington Animal Services, tells PEOPLE.

On Tuesday, State Farm agents presented the shelter with a $1,500 grant to help cover the cost of Jake's care. State Farm also donated leashes, collars, water dishes, and other items to give to new pet owners in adoption kits, according to a press release. Since Kim adopted Jake ahead of State Farm's generous gift, the grant will now go towards a medical fund that will help cover pet care not in the shelter's budget, including x-rays and heartworm treatment.

In January, first responders found Jake stuck in a crate at home with his dead owner, who passed away before they could let the pet out. Jake was adopted not long after his rescue, but his new family lost their home and had to return the canine a few weeks after his adoption, Darlene Cox, a Burlington customer service supervisor, told McClatchy News. Shelter employees nicknamed the canine "Jake from State Farm" after the happy insurance agent and even began dressing him up in a red State Farm T-shirt.

After getting his nickname, Jake was placed in two foster homes that didn't work out because he "does not care for cats, and they had cats," Cox said.

Despite everything Jake has been through these last few months, the pup "has a happy personality [and] seems to keep a smile on his face," the shelter wrote on Facebook ahead of the dog's adoption.

Pet adoptions and fosters have soared during the COVID-19 pandemic as people are spending more time at home. According to Porch and Shelter Animals Count's new research, Americans have adopted more than 750,000 shelter dogs and cats during the pandemic. About 54% of shelter animals have found new homes, a 3% increase from last year.

In a statement shared with PEOPLE, the ASPCA shared the following about pandemic pet adoption rates: "There's no doubt that the public's desire to support their local shelters by fostering and adopting vulnerable animals amid the COVID-19 crisis has been demonstrated through an enormous and unprecedented response. In the first few weeks of stay-at-home orders in March 2020, the ASPCA saw a nearly 70 percent increase in animals going into foster homes through our New York City and Los Angeles foster programs, compared to the same period in 2019, with interest in adoption at the ASPCA Adoption Center in New York City increasing by more than 177 percent in 2020 from March through October compared to the previous year."