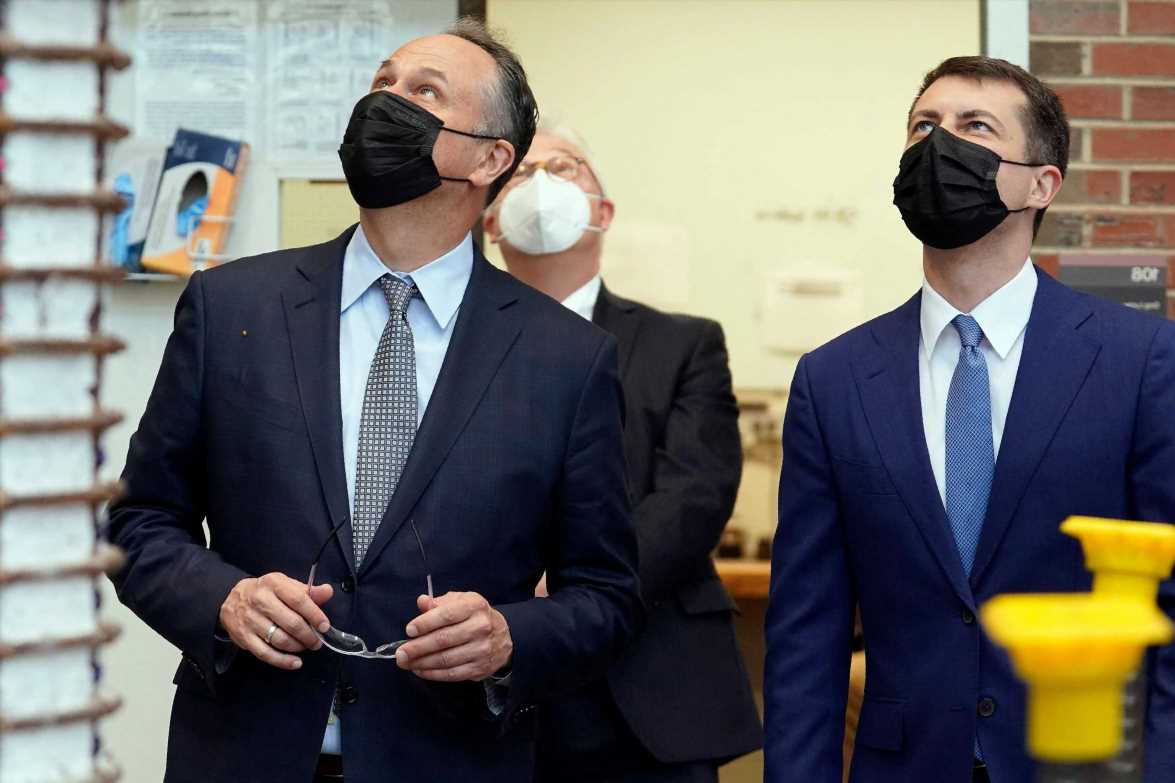 Bill O'Reilly on his newest book, 'Killing the Mob'

A survey of memorable Oscars moments ahead of Sunday's show

Part of the zillions Joe Burden’s itching to raise will go to Kamala, who so far just stands and claps after Joe drones.

Busy fitting new pantsuits and finding reasons she can’t wear any by going to that dusty border and seeing the dying, starving refugees — she’s getting paid to just raise her hands and applaud.

Now, her husband’s looking to glom some of the spotlight. Mr. Kamala’s new assignment might’ve gone to Burden’s son, but Hunter’s busy selling a book, which says how he helped mankind (mostly him).

Kamala’s husband’s new gig? Touring our country. City by city. To tout all things Biden. Not that his rich, fat, fabulously paying career before was so fabulous that he couldn’t leave it, understand.

His new task? Helping out another know nothing. Former small-town mayor Pete Buttigieg now drives the agenda at DOT. For this government paying job of basically doing zip he needs a helper. Kamala’s husband is Pete’s new cheerleader. This husband will also be used to babysit Buttigieg. Kamala is “parking” Doug next to transport secretary Pete to keep tabs on her potential 2024 rival.Pete will soon tour the country.

City by city. To tout all things Biden, as it relates to transportation. In tow, will be Doug, to give the transit tour even more . . . gas.

Our favorite prince and prance — that’s Prince Empty and me-me Meghan — are about to get analyzed on TV. The hourlong show will air on British TV. It’s called “Meghan and Harry: Recollections May Vary,” in which their every move — body language, tics, gestures, speech, tone of voice, his short socks, etc. — from all their public moments, plus excerpts from that famous whatsername’s interview, will be analyzed frame by frame. The thing upends bodily fluid on the two zeroes. It’s going to be Hell Britannia.

Alleging, defaming and name calling beats Hasbro as the newest game in town. Libel cases may soon beat divorce cases. In Thomas Jefferson’s day, a publisher named Harry Croswell learned libel was a crime. Arrested for talking against Jefferson, Croswell appealed. That conviction was overturned when lawyer Alexander Hamilton argued his defense was “truth.” Then, Hamilton trashed Aaron Burr, who was running for governor of New York. Those remarks were leaked to the local paper. About to sue Hamilton for libel, Burr instead challenged him to a duel. Hamilton might’ve won the lawsuit, but he lost the duel.

Nothing to see here …

Geoffrey Weill, who does p.r. for the most famous places. One story: “Once, at the La Mamounia in Morocco, I was told no soul on Earth, no human in the galaxy, may know Donatella Versace’s there. Mum. Secret. She’s staying incognito. Next morning, the front row of pool chairs suddenly bears ‘Reserved’ signs. Next, a cortege arrives. Security guards. Then more galoots alongside. Behind them even bigger muscle men. Then Donatella. With hairdresser, masseuse and additional bodyguards. Into the reserved seats. She removes the top of her bikini. This non-bra part is arrayed for even people looking from Bermuda. This big secret then swims, suns, snoozes, reclines in the deck chair topless in full view of everyone getting a full view. Then, topless, she gets a full body massage. Her hair is then brushed 200 times — but we must never notice that she’s there.”

Restaurants are reviving. Linda Fairstein was at Primola. Carolyn Maloney at Beach Café . . . Scott Stringer’s worrying friends. If not endorsed by the uber AOC (also spelled ASS) he mightn’t win the primary. That’s all the Dems, who are always squawking, are talking about.

Voter: “I know politicians who actually stole their elections.” Other voter: “Oh, please. I know those who paid spot cash for them.”