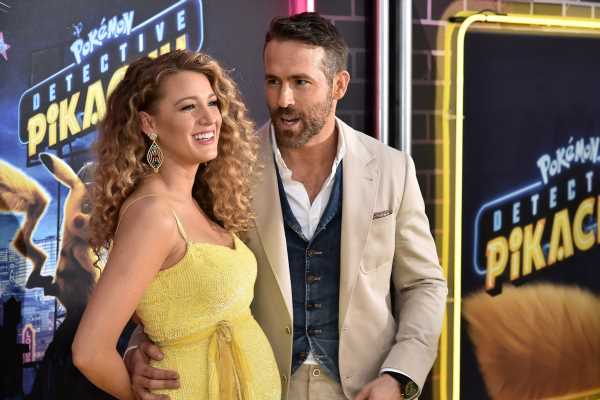 Ryan Reynolds is helping his wife ring in her 32nd in the most Ryan Reynolds way possible, and the result is a hilarious glimpse into the couple’s relationship. I’m guessing that Ryan Reynolds’ birthday Instagram to Blake Lively will probably make you ship them even more, because the Deadpool star’s signature humor is on display as he trolls his wife with a collage of not so ‘gram-worthy pictures. There’s plenty of blurry images, photos of Blake with her eyes closed, and pictures where she’s looking away, or a combination of all of the above, and they’ll make you LOL.

In my opinion, Blake Lively and Ryan Reynolds are one of the best longtime Hollywood couples due to the fact that they never seem to take each other or themselves too seriously. So, when the A Simple Favor actress rang in her 32nd birthday on Sunday, Aug. 25, it wasn’t surprising that her other half decided to infuse the celebration with a dose of humor.

"Happy Birthday, @blakelively," Reynolds deadpanned in his Instagram post’s caption before sharing a collage of his wife in 10 different photo fails. The Gossip Girl star, who is currently pregnant with her third child, can be seen with her eyes shut in most of the photos or with her face out of the frame.

If you’ve been following along on the couple’s birthday antics over the years, you might recognize that Reynolds’ 2019 birthday attempt takes things up a notch from his 2017 birthday post, which Lively had been completely cropped out of the image.

"Happy birthday to my amazing wife," he quipped.

However, something tells me that Lively was in on the hijinks, as she responded in kind by trolling her husband on his birthday that year.

"Happy Birthday, baby," the actress wrote, sharing a photo of Ryan Gosling and Reynolds (who’d been carefully cropped out) from the Critics’ Choice Awards the year before.

It appeared Reynolds wasn’t too upset by the dig, as he commented "Awesome" on the image before heading to Twitter to tease, "My kids tried to surprise me for my birthday this morning. I totally heard them coming and snuck out to start a new life somewhere else."

The pair has previously opened up about the secret to their happy marriage and balancing life with kids, with Lively attributing a lot of their success to their shared careers.

"In general, yeah, it’s nice to have somebody who understands what you’re doing," she admitted during a 2017 appearance on Good Morning America. "Especially because our job is so weird—we have to, you know, like be married to other people, and it’s all so strange. It’s still strange. It’s never normal, even when we’re both doing it."

Meanwhile, Reynolds said during a May 2019 interview with People that the couple makes a point of staggering their projects so that they can keep their family together.

"Blake and I don’t do movies at the same time," he told the publication. "If she is doing a movie in Thailand and I am doing a movie in Vancouver we would just never see each other. We operate as a unit, and that works really well for us."

He added, "The kids stay with us, and the family stays together, and that is where home is. So if we are in Spain or Utah or New York, as long as we are together, we’re home."

From the sounds of things, they’ve got a winning formula figured out, and I’ll be counting down the months until Lively gets to bask in some sweet revenge with her very own Instagram come Reynolds’ birthday on Oct. 23.