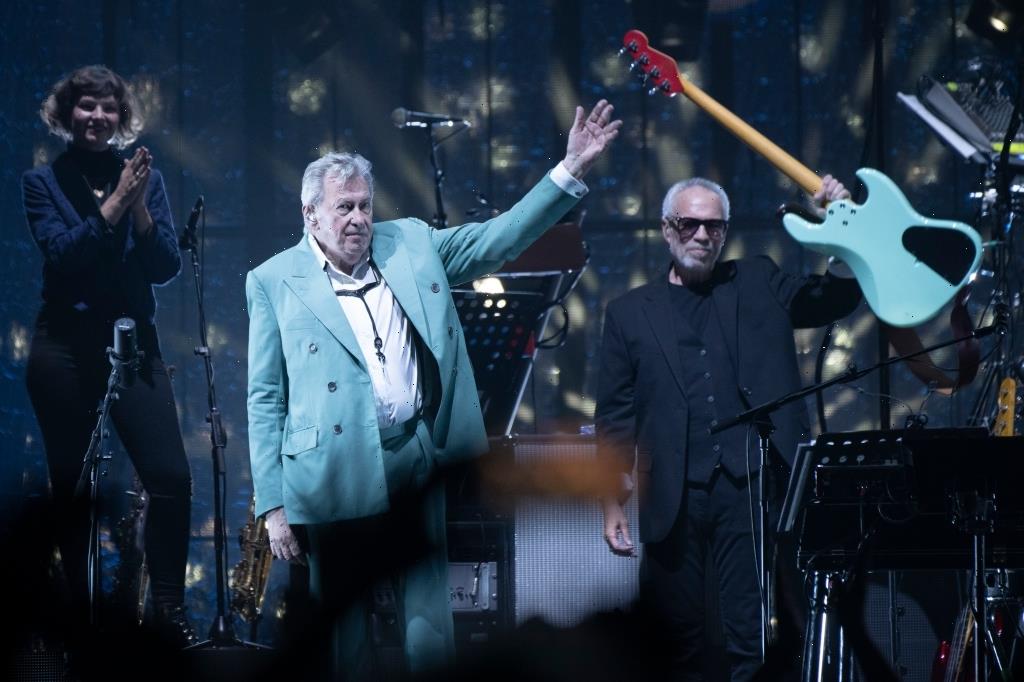 Just over 50 years ago, on the same day, June 16, 1972, two albums were released that changed the landscape of rock and its sartorial splendor: Roxy Music’s eponymously titled debut and David Bowie’s “The Rise and Fall of Ziggy Stardust and the Spiders from Mars.” While each album was conveniently tagged as part of the start of glam-rock and its slow movement from Britain to the U.S., “Roxy Music” was something that “Ziggy Stardust” was not, despite the latter’s grandeur: downright weird.

It is this mix of the urbane, the soigné, the soulful and the strange that the Rock and Roll Hall of Fame inductees are currently celebrating on their 50th anniversary tour. Reunited for live shows for the first time in 11 years, Roxy originators Ferry, Mackay, Manzanera and Thompson — minus Eno, and together with additional players pulled mostly from Ferry’s solo-tour band — proved they still could make music that was elegant, eerie, eloquent and emotional Thursday night at Philadelphia’s Mann Center for the Performing Arts.

Outdoors on a starlit, breezy night was a perfect atmosphere in which to take in Roxy Music. Starting with the fast, angular “Re-Make/Re-Model,” Ferry – seated at an electric piano – led the ensemble though the quickly chugging pulse and chunks of madness that made its original album version endearing. The familiar blips of the “Peter Gunn” theme, the full-group holler of “CPL 593H” in tune with the vocalist-lyricist’s love of Duchamp and his ready-made artform was a perfect first track to signal what was to follow.

Though it took Ferry’s whispery croon a moment to warm, he did so in time to meet and match Mackay’s hypnotic oboe solo on the sweeping “Out of the Blue” and the magnetically eccentric “The Bogus Man.” That Roxy has not eschewed the spooky sensuality of that second album track – sung in Ferry’s deeper-than-deep, creepiest baritone – and its crepuscular cousin, “In Every Dream Home, A Heartache” (about sex with a blow-up doll, with a propulsive finale courtesy Manzanera’s guitar freak-out) is what makes this band uniquely stunning, still. Think of another legacy rock act 50 years on, performing its most lurid or morbid material. Not going to happen.

The smoothly sleek “Avalon” portion of the live show was funky, chic and took up a goodly portion of the concert’s real estate, from the militaristically rhythmic “The Main Thing” to Mackay’s haunting instrumental “Tara” to Ferry’s sensual, low-note vocals throughout “To Turn You On,” to the airily romantic “More Than This” and “While My Heart Is Still Beating.” But it was the the oddballs that were both regal and ruled the evening.

The hiccupping neo-country of “If There Is Something,” the willowing, avant-garde tango of “Ladytron” (complete with its dueling guitar-and-sax attack), the death disco of “Love is the Drug” – the band’s biggest U.S. hit single brought the Philly audience to its feet, as did the manic, one-two punch from Roxy’s sophomore album, “For Your Pleasure,” the hard-charging “Editions of You” and the rave-up “Do the Strand.”

A couple of setlist questions — why did they not do a “Country Life” stunner such as “The Thrill of It All” or the Rickenbacker-ringing “Take a Chance with Me,” crowd-pleasers both? And why would Roxy Music, possessed of such original songwriters such as Ferry, Mackay and Manzanera, close out its frenzied energetic set’s finale with a mellow take on the band’s 1981 cover of John Lennon’s “Jealous Guy”? Certainly, it was lovely hearing Mackay’s soft saxophone solo and Ferry’s sweet, noir-ish whistle end the song, but with so many Roxy classics yet unplayed, it felt like a missed opportunity to celebrate themselves. Maybe for the 60th anniversary reunion shows.