See the ‘Jersey Shore’ cast then and now

Ronnie Ortiz-Magro’s girlfriend claimed there has been “misleading information” online about his recent arrest for alleged domestic violence.

Saffire Matos, who started dating the “Jersey Shore Family Vacation” star last year, spoke out on Monday to assure fans that she and Ortiz-Magro, 35, are still going strong after his latest run-in with the law.

“Ronnie and I are fine,” Matos wrote on her Instagram Story. “There is a lot of misleading information floating around out there. With anybody who reached out with concern I appreciate it with all my heart, but everything that’s being portrayed out there are not facts.”

The eyelash technician continued, “I don’t think it’s fair that people are using false accusations to gain attention. Please leave Ron and I alone. You don’t know what someone is going through at the end of the day. Don’t believe everything you hear or read online.” 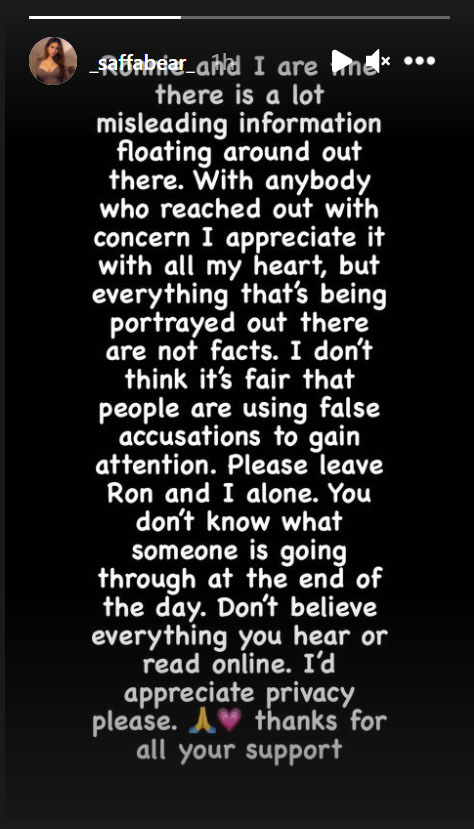 Ortiz-Magro was arrested in Los Angeles on Thursday and released on $100,00 bond later that day. He was already on three years of probation for a 2019 alleged domestic violence incident with his ex-girlfriend Jen Harley, with whom he shares 3-year-old daughter Ariana.

Harley, 33, was in Las Vegas when the MTV personality was taken into police custody last week. Ariana was in her father’s custody at the time, and Harley reportedly picked up the toddler in LA following his arrest.

Ortiz-Magro has not publicly addressed the news.