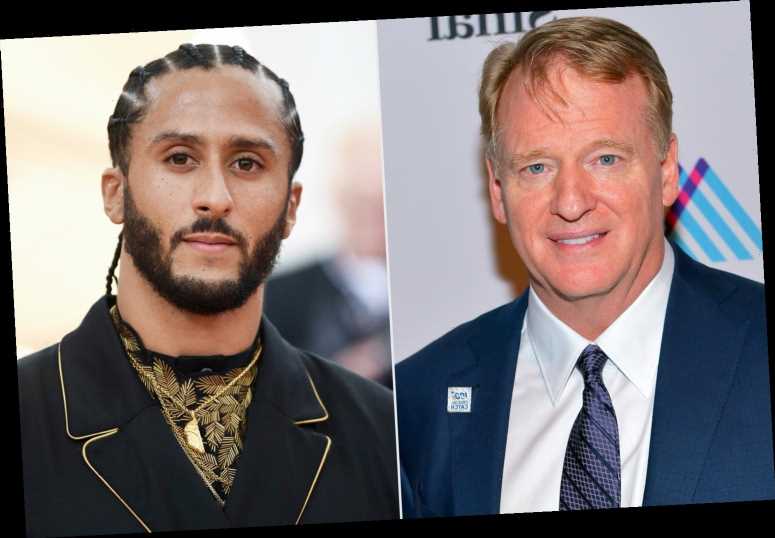 NFL commissioner Roger Goodell says he should have "listened" to Colin Kapernick "earlier" after the former San Francisco 49ers quarterback began kneeling during the national anthem in protest of systematic racism and police brutality.

Goodell was a recent guest on former linebacker Emmanuel Acho's Uncomfortable Conversations with a Black Man, where the two discussed topics of social justice and race. In a revealing moment, Acho asked Goodell what he would say if he personally apologized to Kaepernick for his treatment by the league following anthem protest.

"Well the first thing I'd say is I wish we had listened earlier, Kap, to what you were kneeling about and what you were trying to bring attention to," Goodell said in the first part of his Uncomfortable Conversations appearance, which can be viewed on Acho's YouTube channel.

"We had invited him in several times to have the conversation, to have the dialogue," Goodell continued. "I wish we had the benefit of that. We never did. And we would've benefited from that, absolutely."

In May 2018, NFL owners voted unanimously to approve a policy that would fine teams for players who kneel during the national anthem. But that implementation of that decision was later postponed, according to Rolling Stone.

An NFL team has not signed Kaepernick since leaving the 49ers — a franchise he led to a Super Bowl — in 2016. Many fans misinterpreted Kaepernick's protest as being disrespectful of the American flag and military when the 32-year-old was clear about his focus from the start. In fact, it was a Retired Army Green Beret who suggested that Kaepernick kneel instead of sitting during his protest.

"These are not people who are unpatriotic. They're not disloyal. They're not against our military," Goodell said of the players who have kneeled since Kaepernick. "In fact, many of those guys were in the military, and they're a military family."

Acho said he wanted to interview Goodell in the hopes of getting his personal take on the events of the last four years.

"Personally, I’ve watched prominent figures like the Commissioner stand at the podium or address members of the media in times of crisis,” Acho said in a statement sent to PEOPLE ahead of the interview's premiere.

“I wanted to have an uncomfortable conversation with Roger Goodell, the person, to delve into his personal perspective and how events in time have impacted his life, and what we can expect from him in the future," he continued.

In June, Goodell formally apologized for ignoring players who kneeled during the national anthem, without naming Kaepernick specifically.

"It has been a difficult time for our country," Goodell said in the video, posted to Instagram. "In particular, black people in our country. First, my condolences to the families of George Floyd, Breonna Taylor, Ahmaud Arbery, and all the families who have endured police brutality."

"We, the National Football League, condemn racism and systematic oppression of black people," he said. [We] admit we were wrong for not listening to NFL players earlier and encourage all to speak out and peacefully protest."

To help combat systemic racism, consider learning from or donating to these organizations: