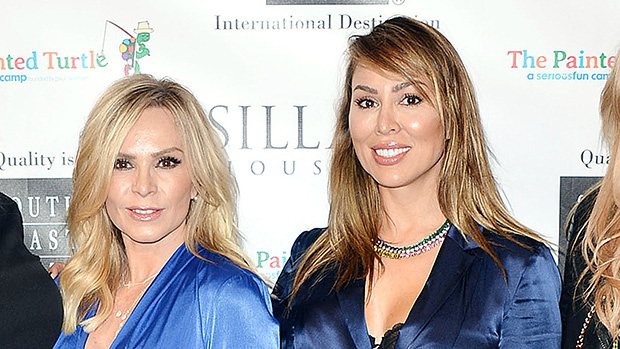 Kelly Dodd told HollywoodLife why exactly she believes Tamra Judge has overextended her stay on ‘RHOC.’ The Bravo star even claimed that she’s not the only one who’s ‘exhausted’ by Tamra!

Kelly Dodd, 43, thinks Tamra Judge, 51, is running out of original material to entertain The Real Housewives of Orange County viewers with. Kelly explained their beef to HollywoodLife, after we caught up with the Bravo Star for an EXCLUSIVE interview while she promoted the FaceTite procedure at the Skybar in Mondrian Los Angeles on Aug. 7! “Well, [Tamra] has to use me as her story line because she is stale, she doesn’t have a story line and everyone is exhausted and she has exhausted her stay,” Kelly EXCLUSIVELY told us, not holding back! As for why Tamra’s tiring out Kelly, she explained, “Everyone is sick of her games, no one likes her from the past except Heather Dubrow, and they don’t even really talk.” Season 14 marks Tamra’s 12th year with the show, and she comes just second to Vicki Gunvalson for longest recurring cast member on RHOC.

Doubling down on her belief that Tamra’s now “stale,” Kelly added, “But I think she is stale and she is uses everyone else for her story lines because no one wants to hear about Eddie [Judge] being sick.” Tamra’s husband, Eddie, previously battled an irregular heartbeat condition called atrial fibrillation that required three invasive heart surgeries (Eddie underwent his most recent procedure in Sept. 2018).

Kelly also addressed Tamra’s kids’ screen time on the show, as she claimed, “[Tamra] can’t really feature her kids, she really is not doing anything with their lives.” Tamra had revealed she and her eldest daughter Sidney, 20, aren’t on speaking terms during the Season 13 reunion of RHOC, which aired in Dec. 2018 (Sidney chose to live with Tamra’s ex-husband Simon Barney after her parents split in 2011). Tamra and Simon’s son Spencer, 19, graduated from high school in 2018, and she also shares a 14-year-old daughter, Sophia, with her ex. Tamra has one other son, Ryan Vieth, 33, whom she welcomed with Darren Vieth.

Kelly then revealed that there’s “absolutely” no chance that she and Tamra could ever be friends again. This feud is still going strong, after it kicked off when Tamra told Shannon Beador, 55, that Kelly allegedly pushed her mother down a flight of stairs (Kelly denied the accusation).