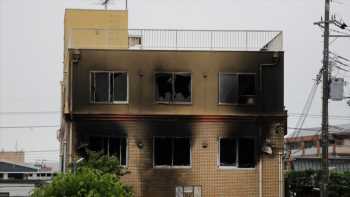 Revenge for allegedly stolen ideas is emerging as a possible motive for the devastating arson attack on Kyoto Animation in Japan, which killed 33 people.

Investigative sources quoted by Japan’s Jiji Press said Friday that the suspected arsonist, who is in custody, held a grudge against the studio. “Since [the studio] stole my novel, I poured out the liquid and set it ablaze,” the man is reported to have said.

On Friday afternoon the police named the suspect as Shinji Aoba, of no known occupation. Earlier, public broadcaster NHK, citing unnamed sources, described the man, 41, as having had mental health issues and a recent criminal record, including a convenience-store robbery in 2012, for which he received a three-and-a-half-year prison sentence.

Police have not yet formally begun questioning the suspect, who was arrested barely 100 yards from the studio and who was burned in the fire. The injuries to his limbs and chest are too severe, reports said. Police plan to question him once he sufficiently recovers.

Some newspapers, including the Kyoto Shimbun and the Asahi Shimbun, said that witnesses to the man’s arrest heard him say: “They stole my ideas” and “They copied my novel.” Other unconfirmed reports say that, in custody, he complained: “They ripped me off.”

Since its founding in 1981, Kyoto Animation has regularly adapted novels into anime series. In 2006, the studio produced the 14-episode series “The Melancholy of Haruhi Suzumiya,” which was based on light novels by Nagaru Tanigawa. Earlier this year, “Tsurune” concluded its 13-episode run on public broadcaster NHK. The series was adapted from a novel series by Kotoko Ayano.

Kyoto Animation president Hideaki Hatta told reporters Thursday that the company had received several threatening emails that mentioned ”death and murder” in the past. “It is truly deplorable, and I am heartbroken,” Hatta said. “What would make [someone] resort to such violence?”

Japanese news reports say that a man is known to have bought 40 liters (about 10.5 U.S. gallons) of gasoline at a nearby filling station 30 minutes prior to the fire. At the crime scene, authorities found two 20-liter fuel cans, five knives and a hammer, but have not yet definitively determined that they belonged to the suspect.

Local authorities said two bodies were found on the first floor of the burned-out building and eleven others on the second floor. Another body was discovered in a stairwell leading from the first to second floors.

The remaining 19 bodies were found in a stairwell leading from the third floor to the roof, whose door was closed but which could have been opened from the roof. An additional 35 people, some of them in serious condition, are presently receiving hospital care, authorities said.

Police and fire departments in Kyoto said that, 20 hours after the attack, the blaze is fully extinguished and no more bodies remain to be found.