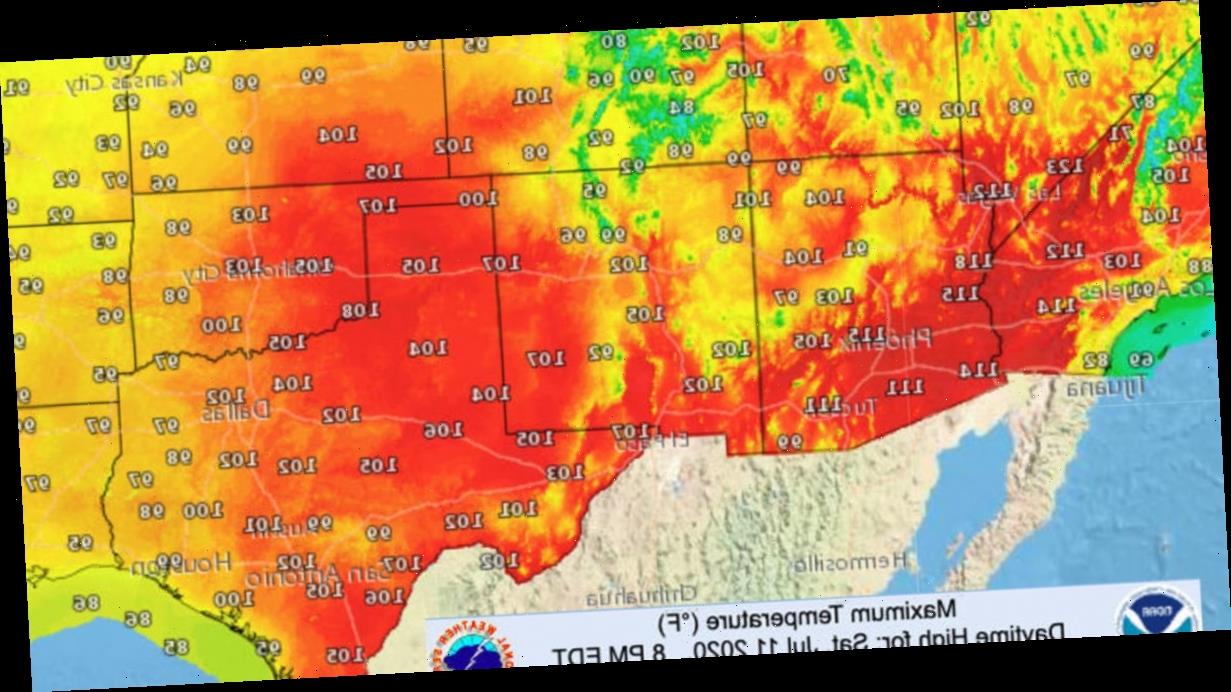 A punishing and relentless heat wave is just getting underway in the South, with some spots forecast to  peak above 110 degrees starting this weekend. But the heat will not stay in the South; next week it is forecast to move north and east, spreading 100-degree temperatures across the Ohio Valley and into the Mid-Atlantic.

The National Weather Service is forecasting 75 or more record-high temperatures to be approached or broken from Friday to Tuesday alone, and that number is likely to grow significantly into next week. Early next week a few cities in the Plains states may even flirt with their all-time record highs. However, when all is said and done, the bigger story will likely be how long this heat wave lasts.

Jeff Masters, Ph.D., founder of the popular site Weather Underground and a regular contributor to Yale Climate Connections, says what concerns him most is the prolonged exposure to the heat. “The heat wave will be very long-lived, lasting multiple weeks in some areas with only a few days of near-normal temperatures during that span. This will increase the odds of heat illness and heat-related deaths.”

Amarillo, Texas, for example, is embarking on a 10-day stretch of 100+ degrees Fahrenheit, with some days near 110. That’s 10 to nearly 20 degrees above the average high temperature of 92.

In the past few years these massive heat outbreaks have become commonly known as heat domes — sprawling areas of high pressure bringing hot and dry conditions for days. Heat domes are best seen in the upper levels of the atmosphere. In the image below, a big mountain of warm air builds and expands, reaching historic heights in the southwestern U.S..

Extreme – Record breaking – #heatdome on Saturday. The ridge at the 500 mb pressure level raised above 6000 meters (warm air expands). For perspective that seems to be at or above records for most of the SW US including Midland and El Paso, Texas pictured here. #heatwave pic.twitter.com/sUrh811ICR

The bigger these heat domes grow, the hotter and longer-lasting heat waves become. And this will be a big one. More than 80% of the nation — 265 million people — will sweat through highs above 90 within the next week. Another 45 million will suffer through triple-digit temperatures.

The core of the heat this weekend will build across the western lower Plains and the Southwest.

Most of Texas and Oklahoma will top 100 degrees on Saturday, with the Red River Valley area of northwest Texas and southwest Oklahoma topping out at 110. When humidity is factored in, it will feel like a sweltering 110 in Dallas and Oklahoma City during the afternoons. 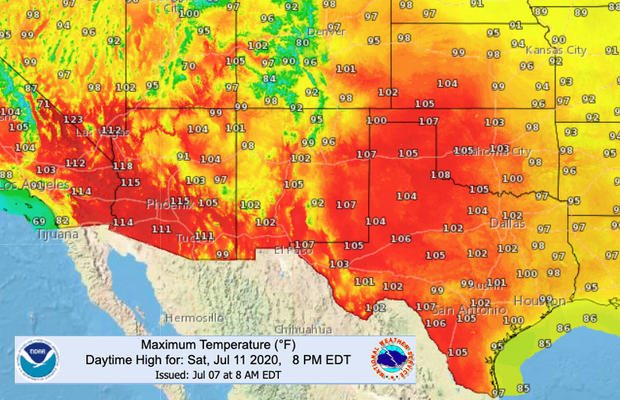 The National Weather Service has issued an Excessive Heat Warning for inland Southern California, southern Nevada and the southern half of Arizona from Saturday through Monday for a very high risk for heat-related illnesses such as heat cramps, heat exhaustion and heat stroke.

In Phoenix, Arizona, the mercury is forecast to reach 116 or above on Sunday, which would break a record set in the late 1800s. The all-time record in Phoenix is 122. Nearby in Lake Havasu the temperature on Sunday may reach 120.

All-time record high temperatures always enter into the discussion when it gets as hot as it’s going to get. There is a slight chance temperatures could reach as high as 120° in Phoenix Sunday. Temperatures this extreme have only happened 3 times before. #azwx pic.twitter.com/dC2oEuWDe9

Early next week the heat dome will shift east and north. Early indications from the models show the heat spreading into the central Plains and Mississippi River Valley. By Tuesday, widespread afternoon highs are forecast to reach 110 to 115 in much of Kansas, Oklahoma and north Texas.

Temperatures like these may come close to the highest temperatures ever experienced in this area, but in most cases they will probably fall just short of breaking records. The vast majority of all-time records in the Plains, from Kansas south through Texas, are scorching — ranging from from 112 to 120 degrees.

While this heat wave will be severe, it likely won’t surpass the heat waves of the hottest period for much of the U.S., the Dust Bowl era of the 1930s. The image below shows the highest daily maximum temperatures across the Plains in red and the highest daily minimums in orange. The heat in the 1930s is far and away the warmest period.

Nearly 50% of the all-time heat records in the contiguous U.S. were set in the 1930s and still have not been beaten today. That’s because of intense irrigation across the central states; the moisture has a substantial cooling influence. As a result, the region is one of the few places on Earth not exhibiting an increasing trend in heat waves. It is a testament to how influential humans have become in shaping the climate system.

But that influence goes both ways. Despite the cooling effect of irrigation, 2012 did manage to narrowly surpass 1936 for the warmest July on record. And with the heating influence of greenhouse gases building up in our atmosphere, Masters says it’s just a matter of time before 1930s heat records tumble.

“Another decade of global warming, combined with natural variability, should produce a July heat wave in the U.S. capable of beating most of the Dust Bowl extreme temperature records,” he said.

Bob Henson, a longtime colleague of Masters at Weather Underground, says he doesn’t expect “a raft of all-time or even monthly records, given the high bar of the 1930s and some recent years, like 2012. But I would expect at least a few, as well as some records for consecutive 90/95/100F temps.” Henson feels this month could end up being “one of the hottest U.S. Julys on record given the breadth and duration of the expected heat.”

That’s because the heat wave forecast for the Southwest and Plains will not stay anchored in place. Due to a west-to-east steering flow across the country, a piece of this sweltering heat will break off and stream east roughly along I-70 from St. Louis to Indianapolis and Pittsburgh to Washington, D.C. All of these cities may reach or surpass 100 degrees mid to late next week.

And the extreme heat is likely not going away anytime soon. Long-term computer model projections point to a continuation of heat into the end of July.