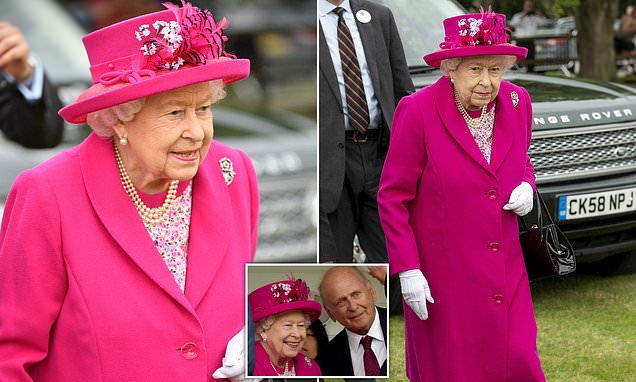 Where does one get the stamina? The Queen looks radiant in fuchsia pink as she arrives at the Royal Windsor Cup Final – her SIXTH engagement in seven days

The Queen looked radiant in a bold pink coat and floral dress as she arrived at the Royal Windsor Cup Polo match this afternoon.

Despite this being her sixth engagement in seven days, Queen Elizabeth II was full of smiles and appeared well rested as she greeted guests today.

Her Majesty, 93, traditionally presents the trophy to the winning team at the end of the competitive event at the Guards Polo Club, Windsor Great Park.

The Queen accessoried her bright look with a matching hat which was decorated with flowers and feathers on the front. 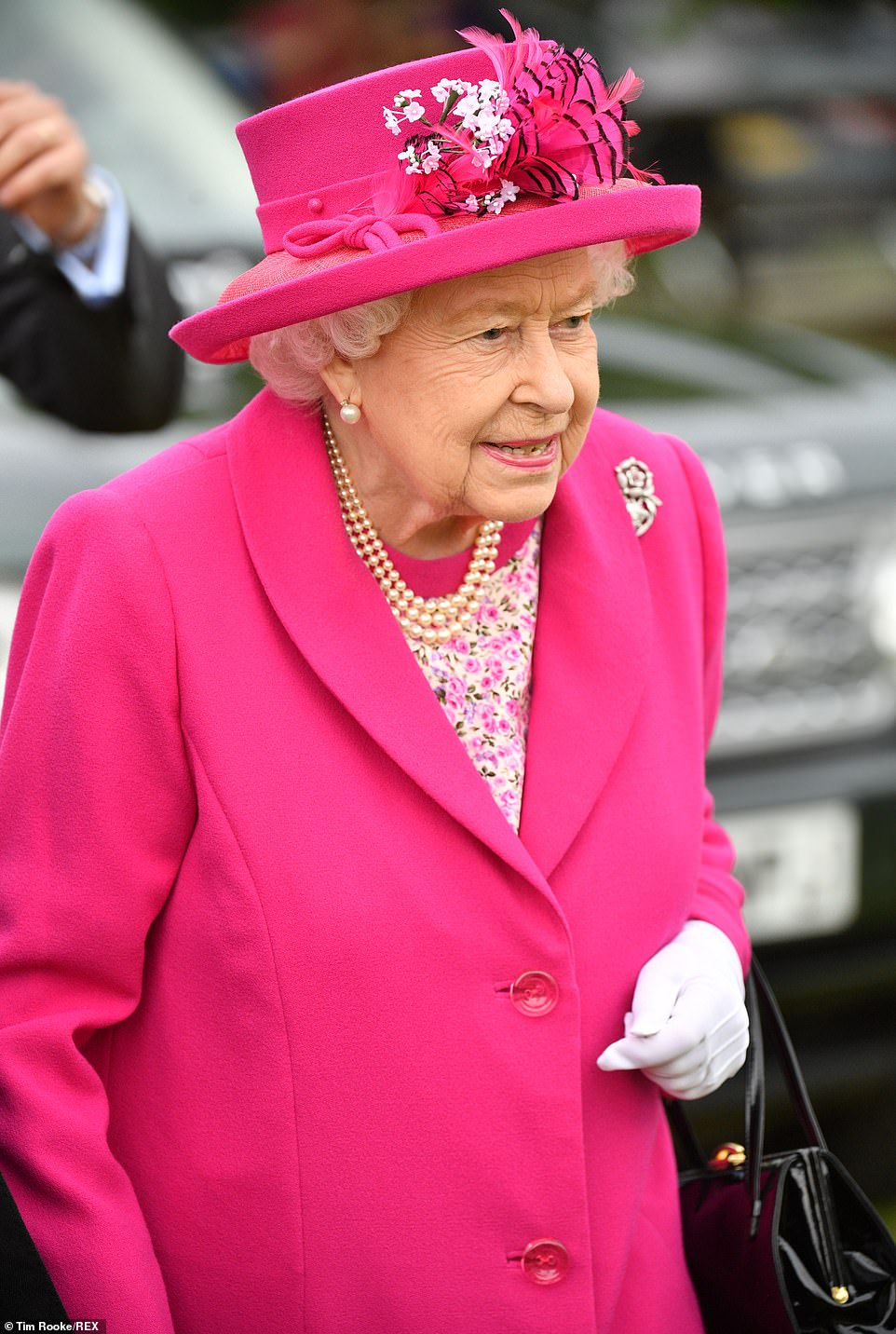 Queen Elizabeth II, pictured, looked radiant in a bold pink coat as she arrived at the Royal Windsor Cup Final this afternoon 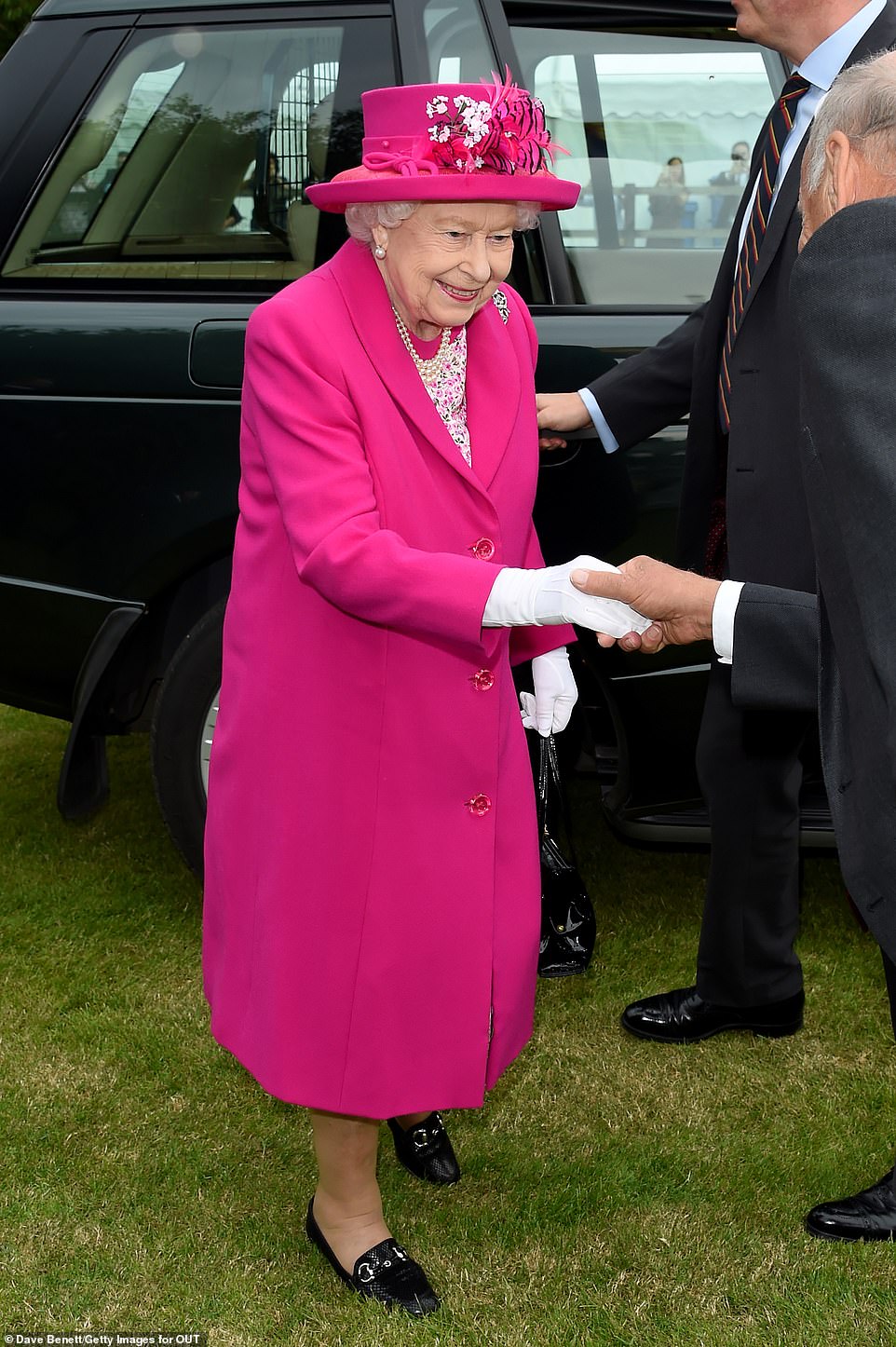 Her Majesty, pictured, was full of smiles as she greeted guests at the event and wore a classic pair of white gloves today

She also donned a pearl necklace and earrings as well as a silver brooch to complete her smart but sophisticated look. To finish her ensemble the Queen added a pair of classic white gloves and her trademark black handbag.

Today is Finals Day and is historically attended by the Queen and the Guards Polo Club’s President, The Duke of Edinburgh.

The day concludes with the popular British Driving Society Show parade in front of the Royal Box and is this year sponsored by Japanese company Outsourcing Inc.

Outsourcing Inc is one of Japan’s leading corporations and currently has more than 100 companies in various countries. 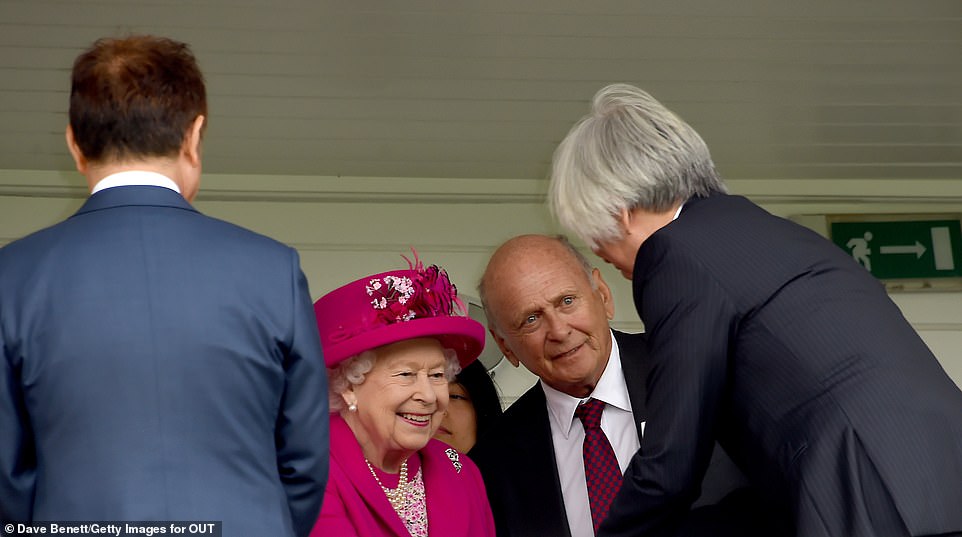 The Queen smiled as she greeted David Matsumoto, right, who is an adviser to the company sponsoring the match today 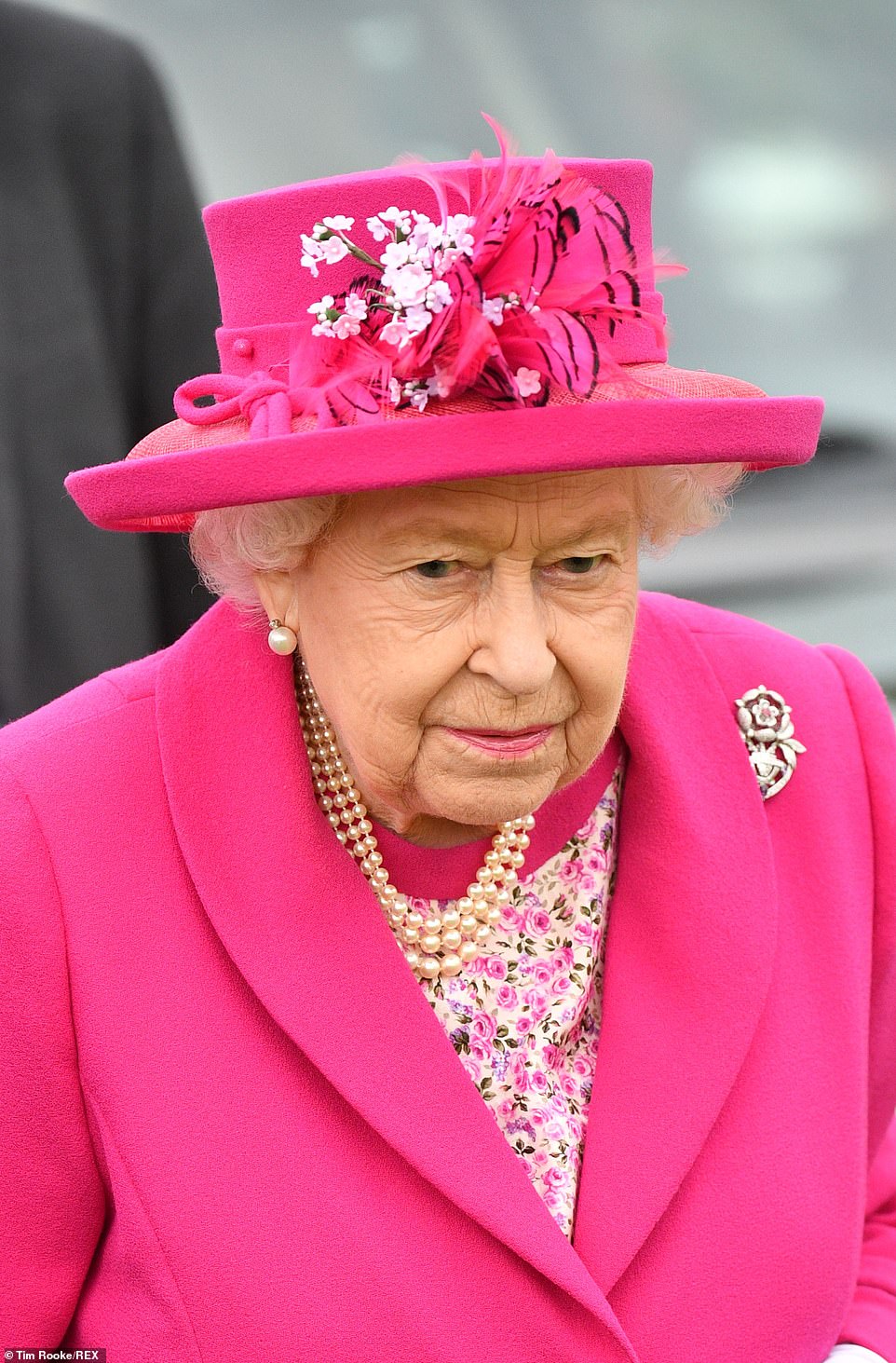 Despite having had a busy week with several appearances at Royal Ascot, the Queen looked well rested today for the polo 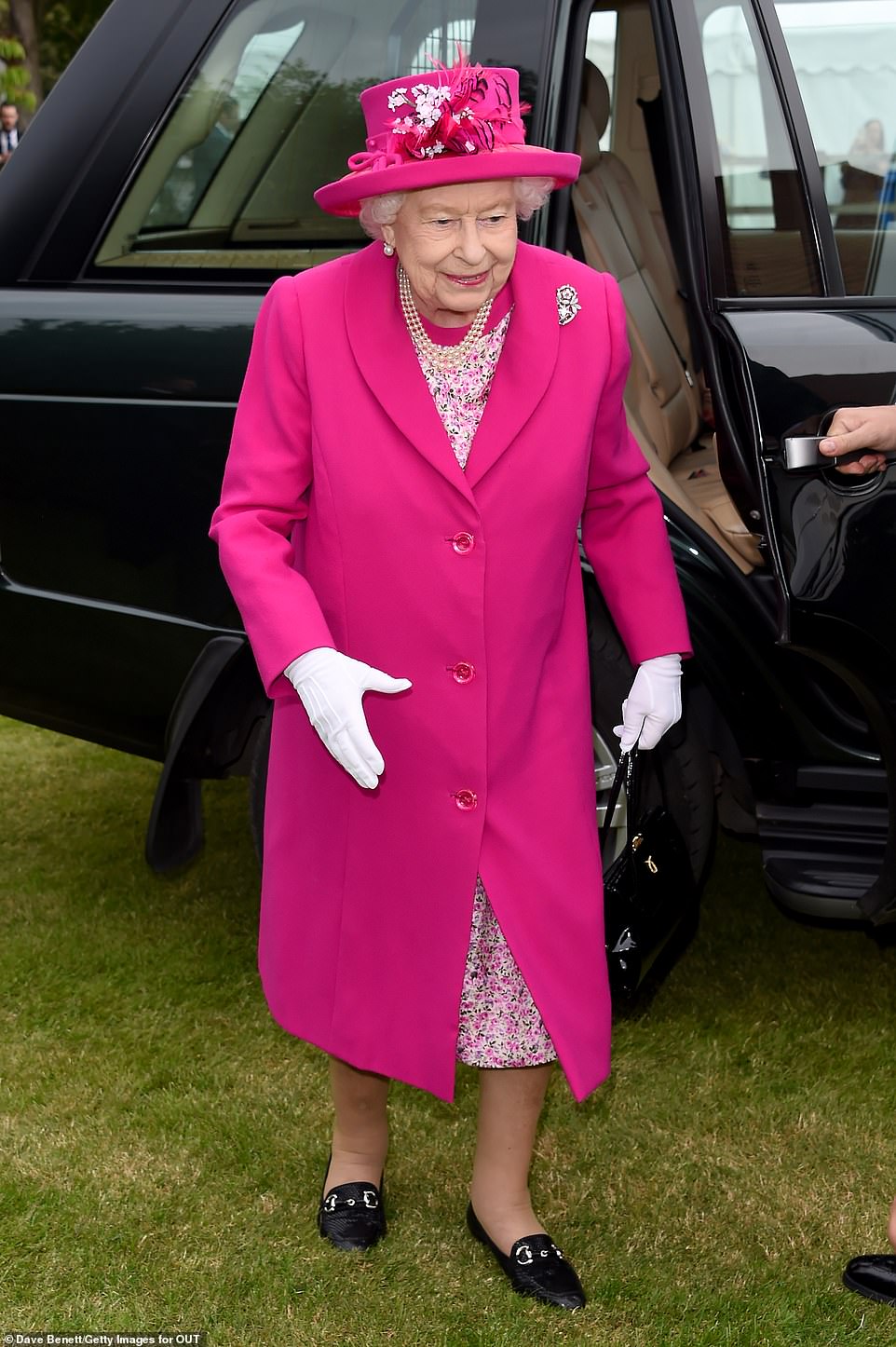 David M. Matsumoto, who is an executive advisor, said: ‘I am truly happy and grateful and feel it is an honour to be able to be involved in this wonderful event.’

Since David lost his two-year-old son in a pool accident in the U.S., he has taken on his son’s name as his own and continued contributing to charitable activities for more than a decade.

In a press release announcing the Polo sponsorship it was revealed there were plans for children to be invited to the Royal Windsor Cup as David hoped to provide an opportunity for them to have fun and create memories.

The Guards Polo Club was founded on 25th January 1955 with Prince Philip, Duke of Edinburgh, as President. 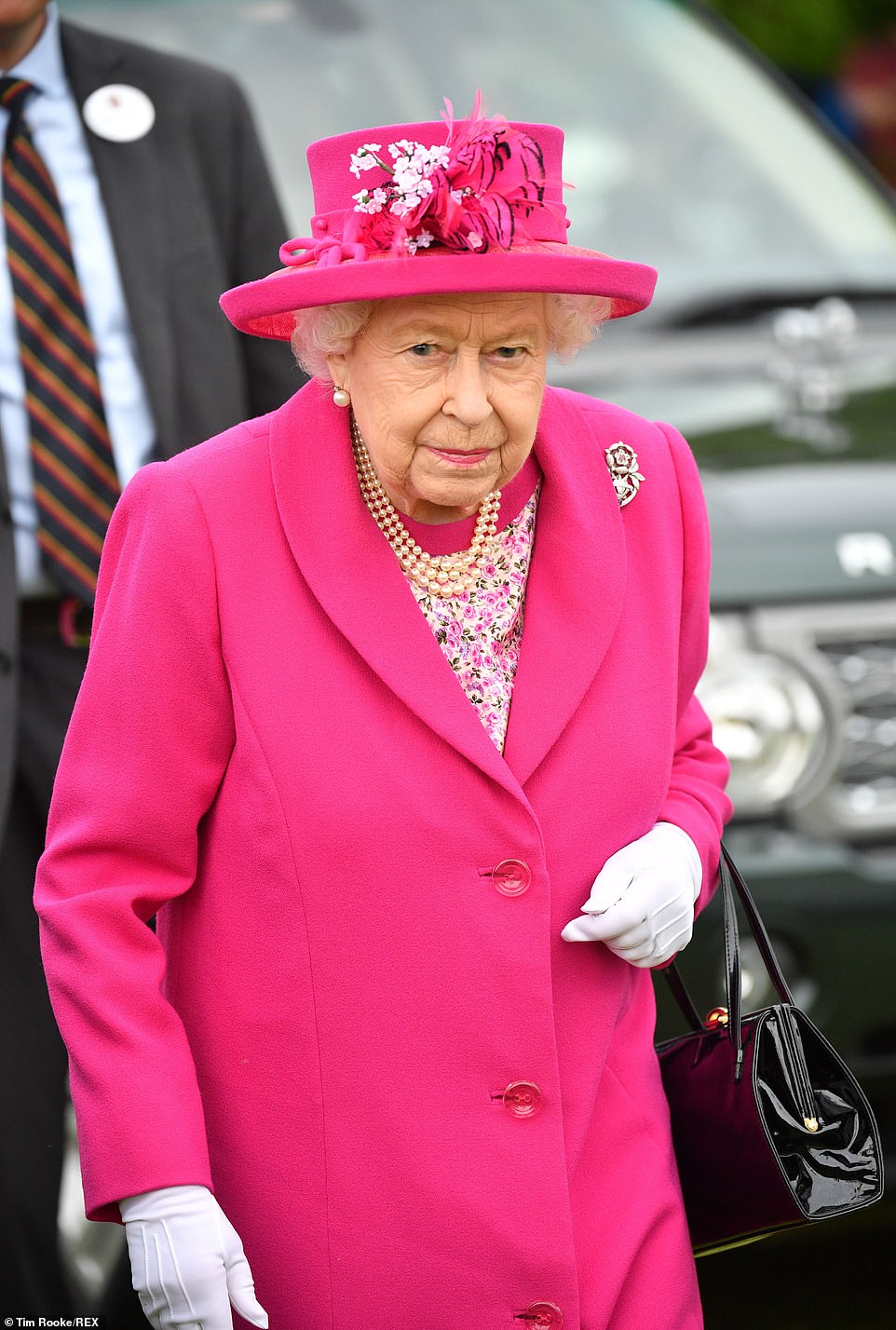 Her Majesty, pictured, made sure to match her coat to her fabulous pink hat which had flowers and feathers on the front 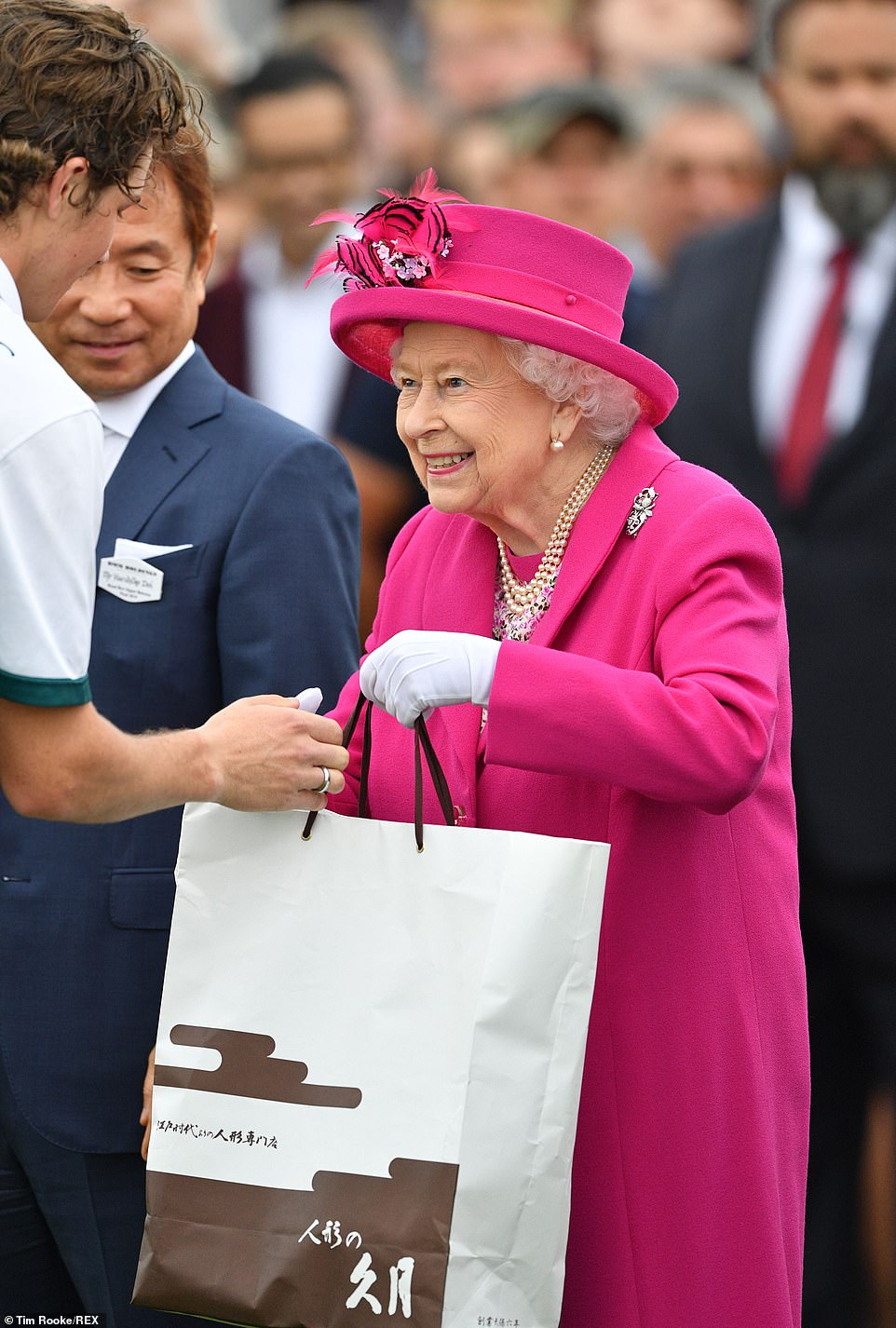 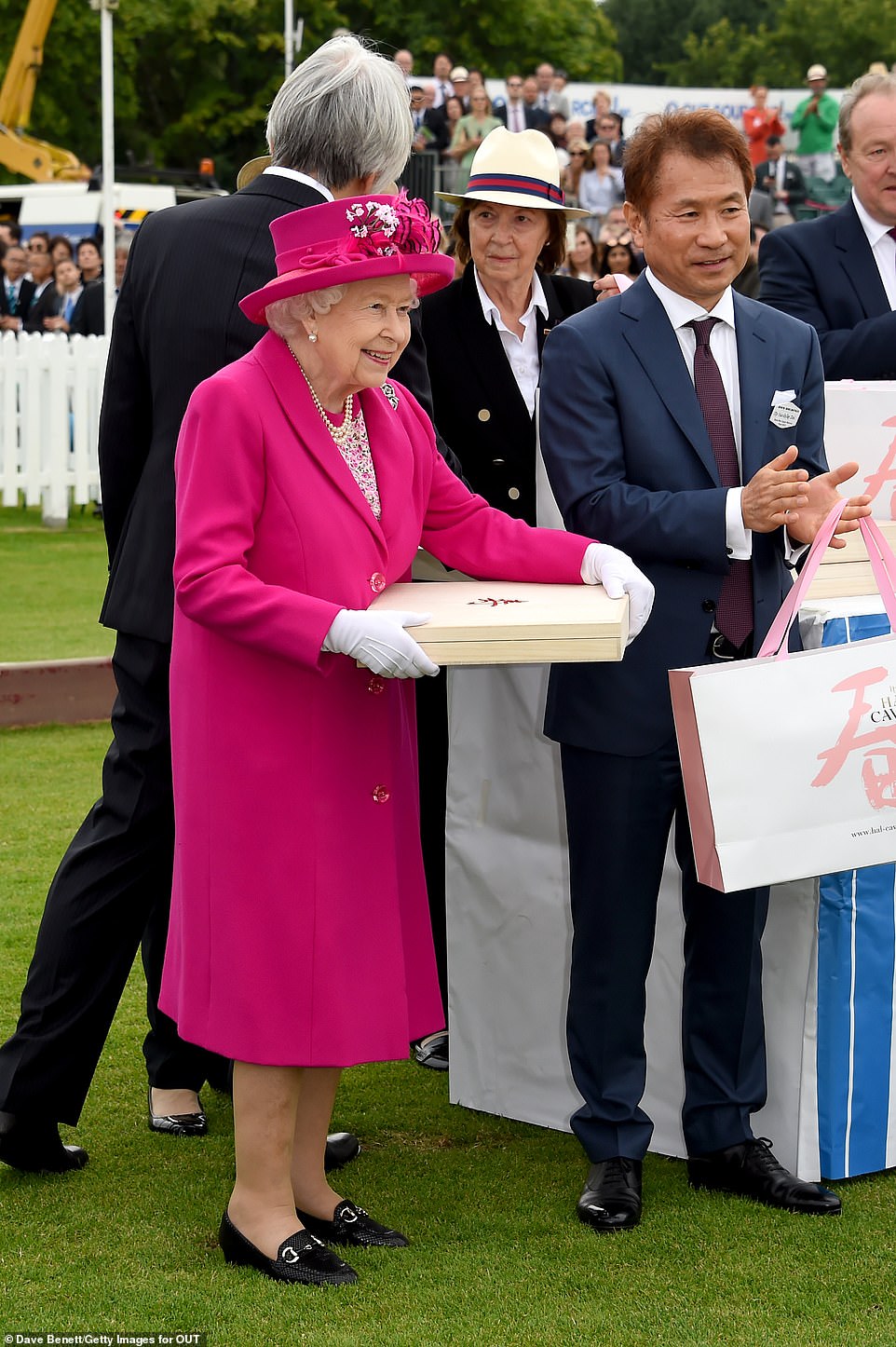 Queen Elizabeth II was spotted handing out awards and gifts at the Polo match. She is pictured with Haruhiko Doi

Originally named the Household Brigade Polo Club, the name was changed to its present form in 1969 and became a fully civilian club in 2000.

The Club’s season starts in April and finishes in mid September, hosting more than 500 matches each year.

The premier tournaments include the Cartier Queen’s Cup, which happened last Sunday, and the Out-Sourcing Inc. Royal Windsor Cup which is on today. 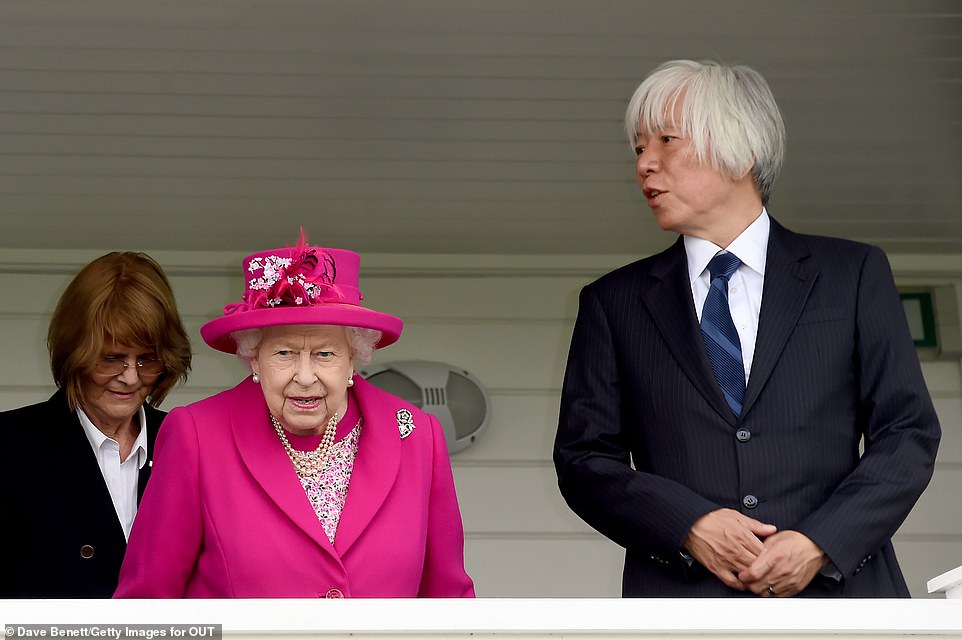 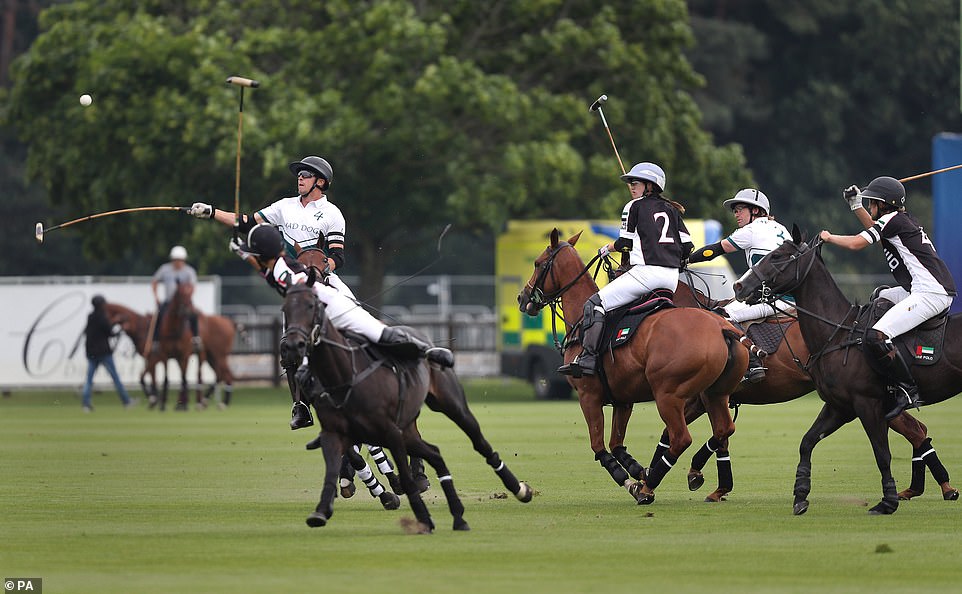 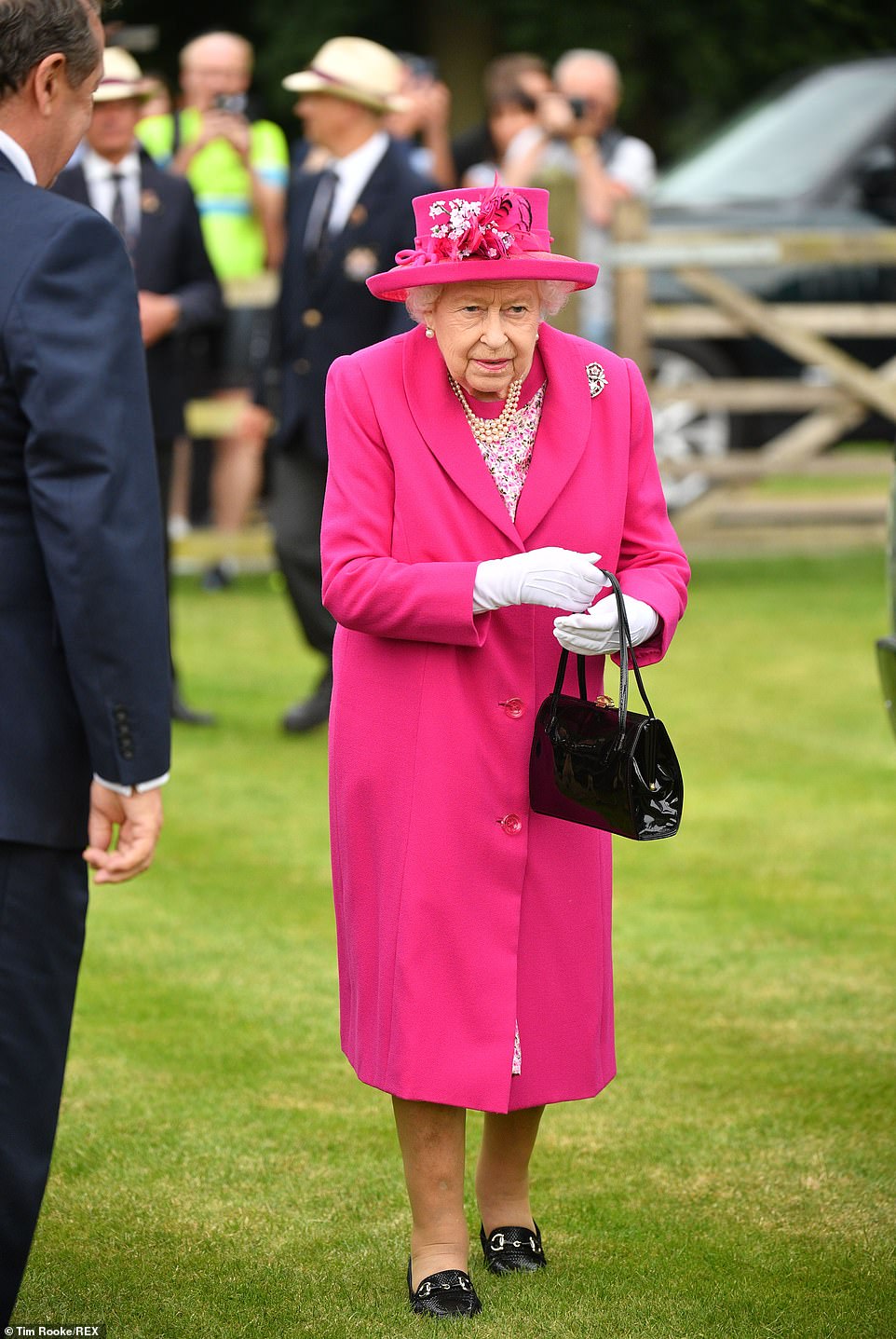 Queen Elizabeth, pictured, appeared to be in good spirits as she enjoyed the Polo match in Windsor today 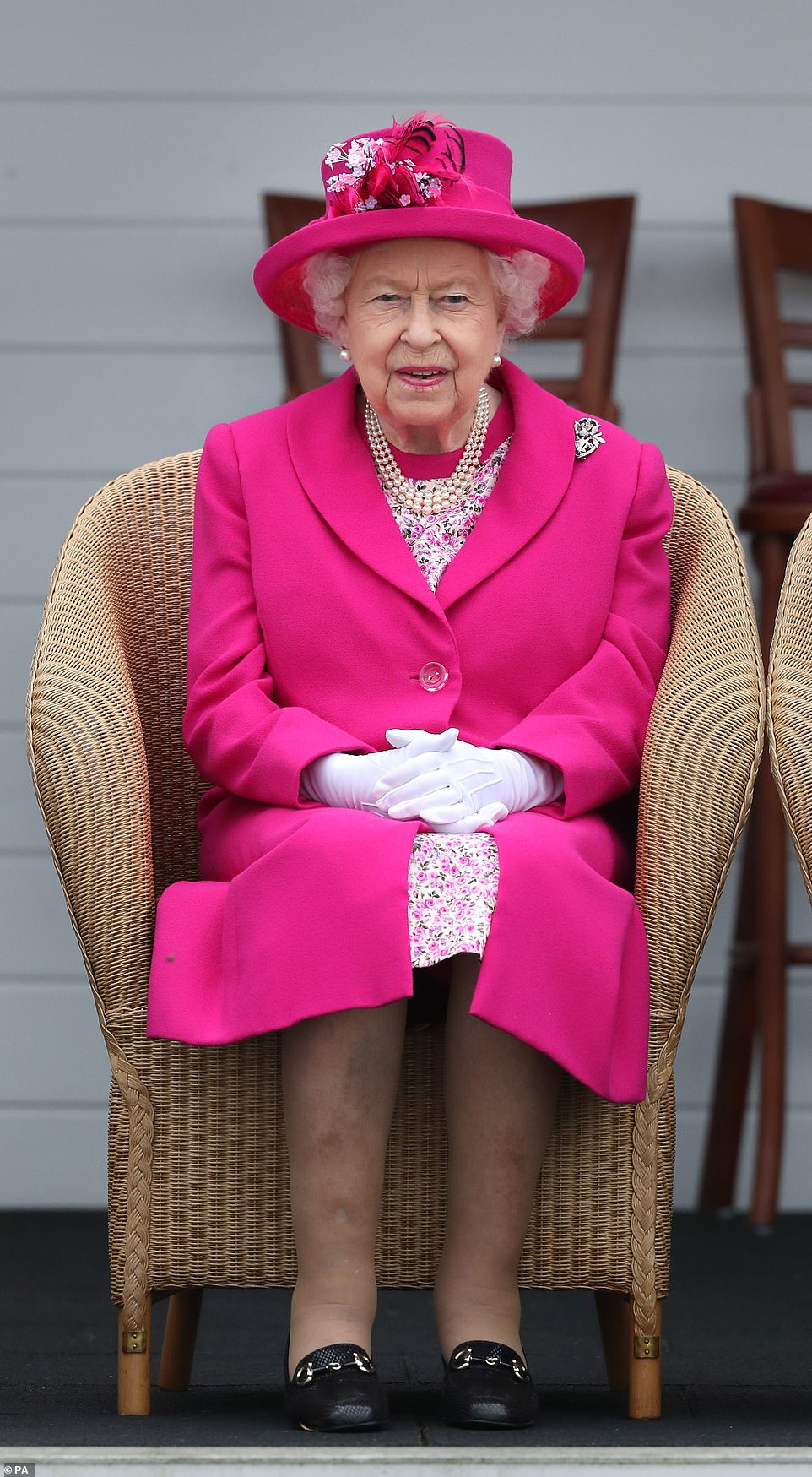 Her Majesty, pictured, wore a touch of pink lipstick to match her bold fuchsia pink outfit at the Royal Windsor Cup today 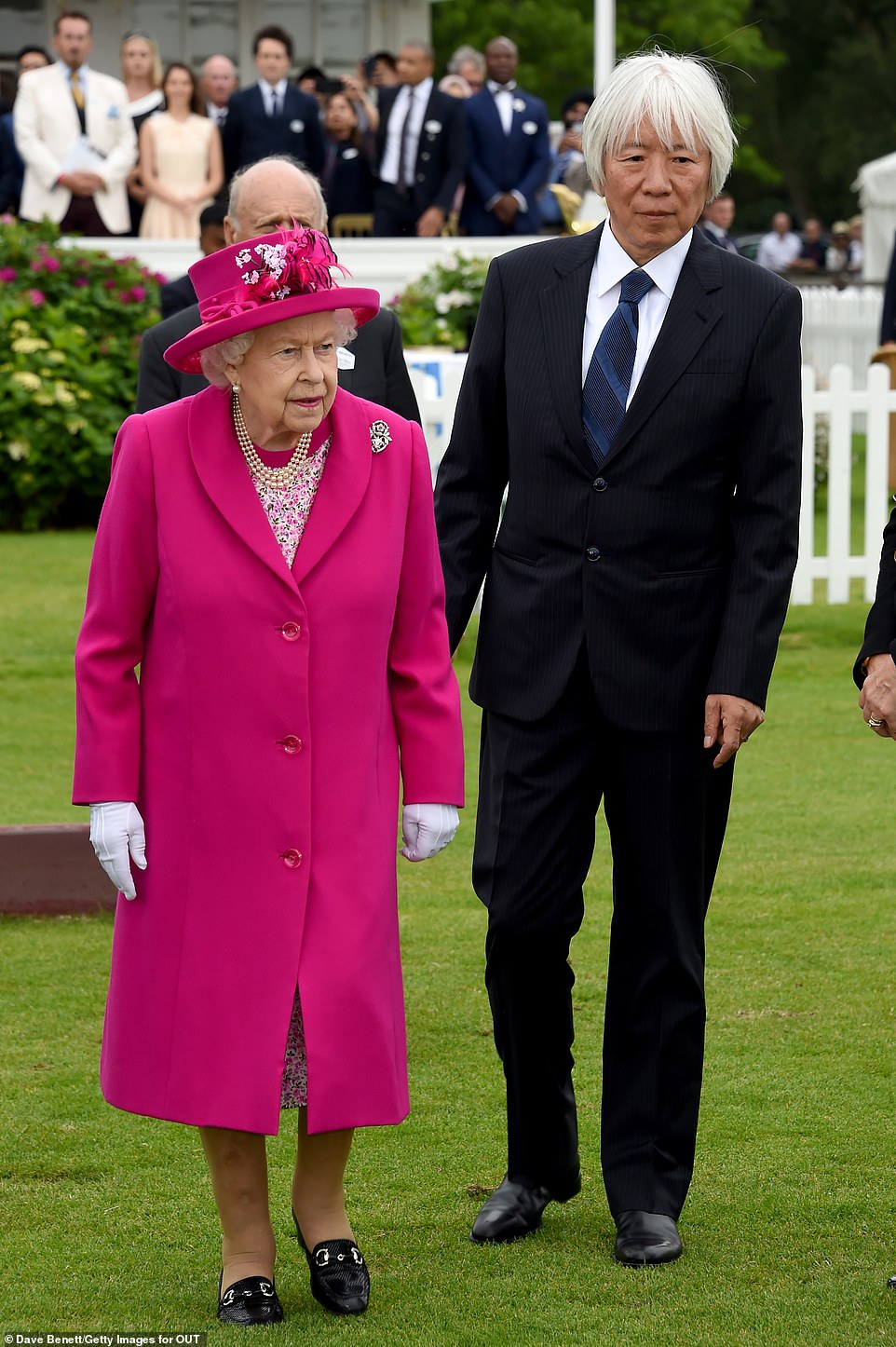 David Matsumoto, pictured with the Queen today, said it was ‘honour’ to be able to be involved in the ‘wonderful’ polo event

Yesterday the Queen stole the show on the last day of Royal Ascot in a lime green outfit and matching hat.

Since taking to the throne in 1952, the Queen has made an appearance at every Royal Ascot meeting and had five horses running at this year’s event.

The Queen’s horses at Ascot include Elector and Seniority, who ran on Wednesday. The Queen’s Eightsome Reel ran on Thursday.

Magnetic Charm, a three-year-old bay filly, came second at the Sandringham Stakes on Friday and her bay gelding, Sextant, also ran on the same day. 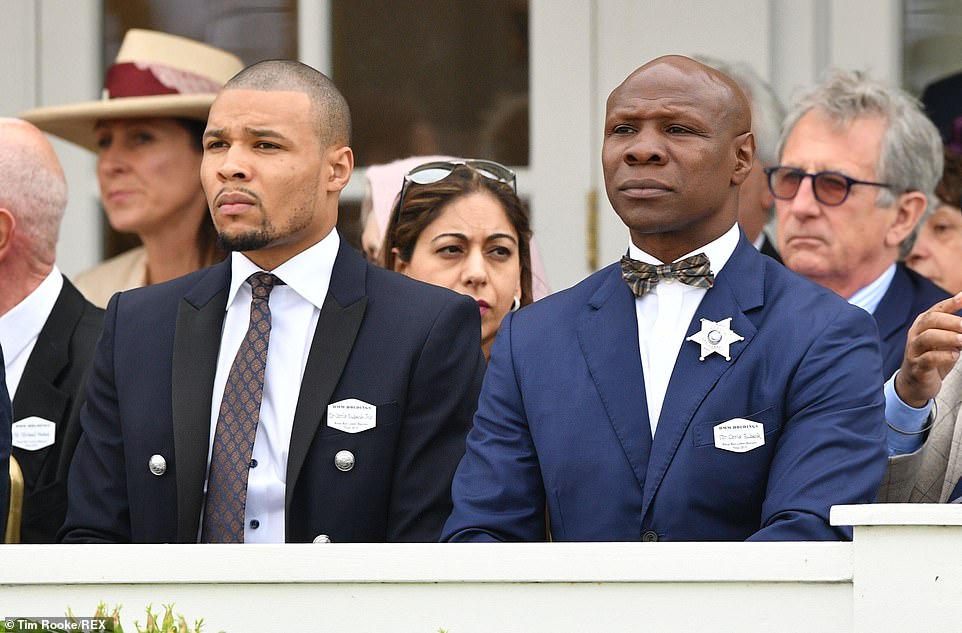 Professional boxers Chris Eubank junior and Chris Eubank, pictured, were among the guests at the Polo match this afternoon 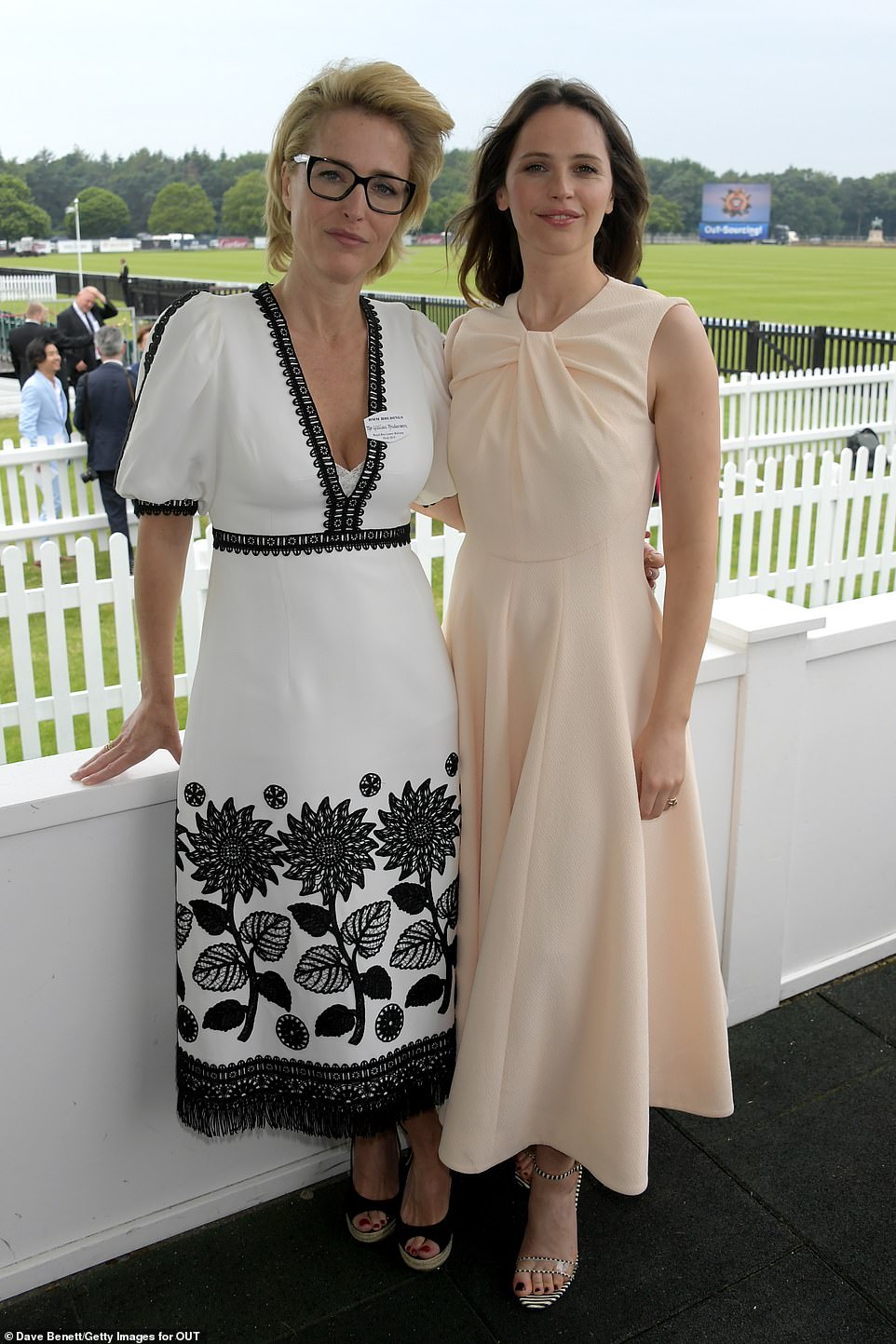 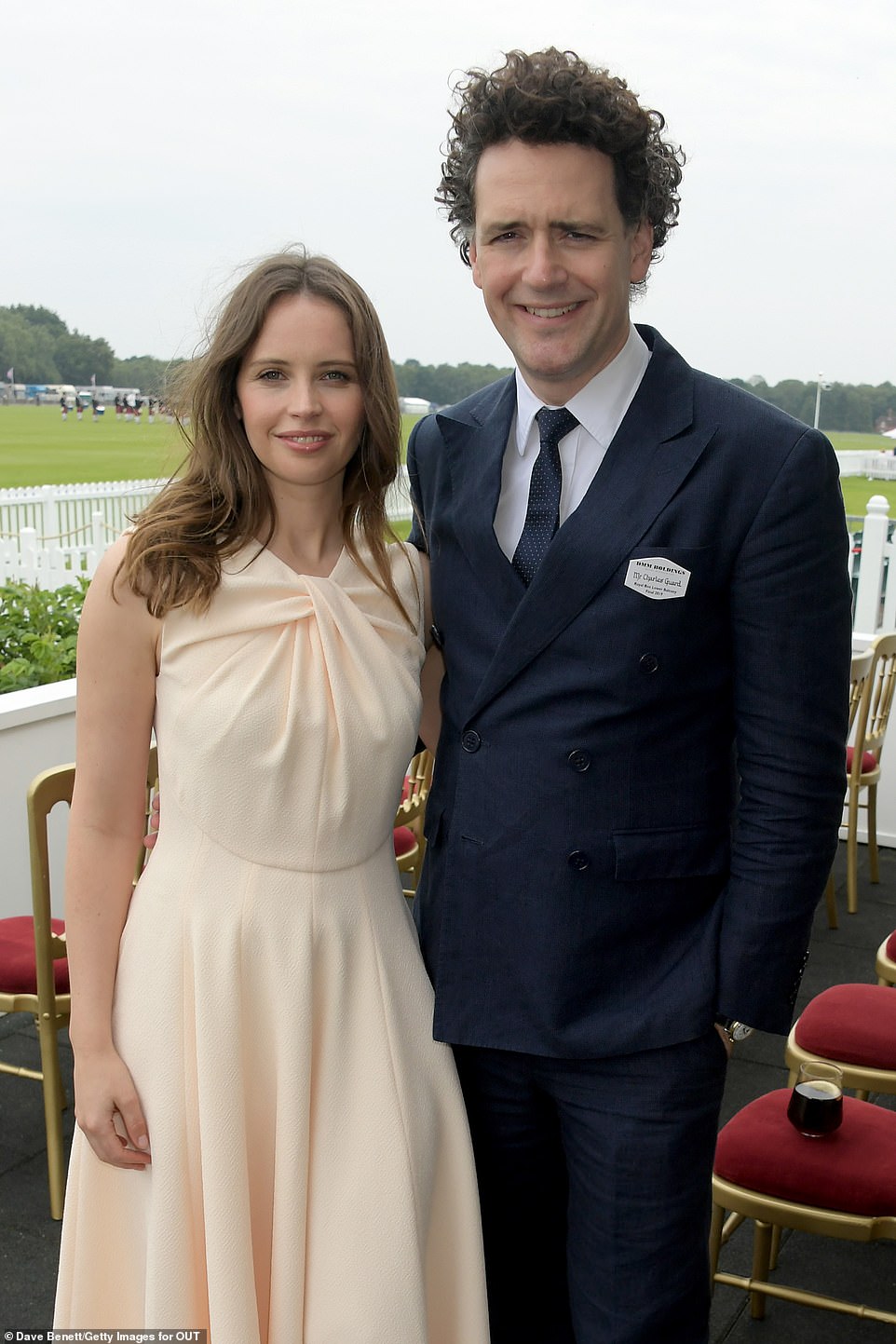 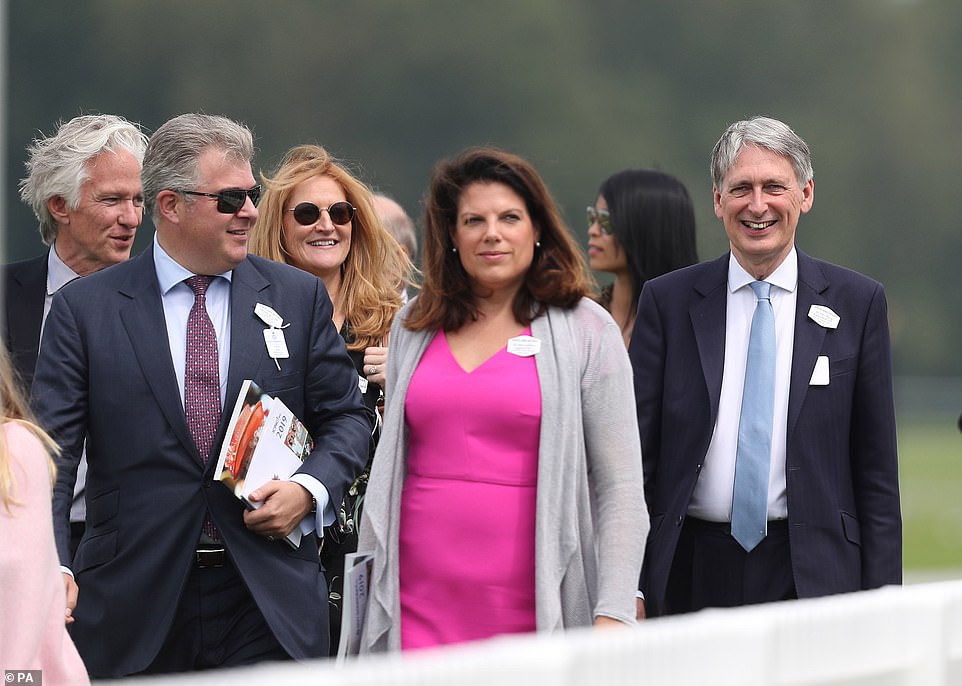 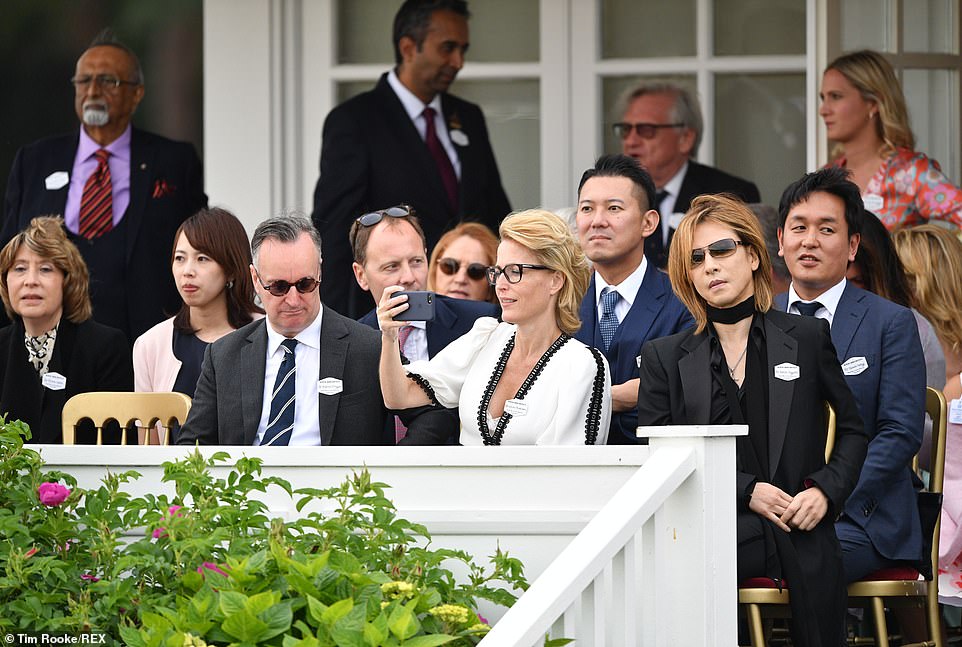 Gillian Anderson, centre dressed in white and black, made sure to capture some of the action on her mobile phone today

Last Sunday her Majesty went to Cartier Queen’s Cup where she also opted for a hot pink coat and was seen with actress Jenna Coleman, who played Queen Victoria in the hit ITV series of the same name.

Later in the day polo player Nicolas Pieres, Number 3 from the winning team Scone, was seen to break royal protocol as he embraced the queen with an arm around the back.

As the Queen presented the winner with a Cartier bag containing his prize, Mr Pieres looked away to pose for a photo with his hand at the top of the Queen’s back.