Prince William said he is “sickened” by the racist abuse that three Black soccer players for England have received since the team lost to Italy in the European Championship finals Sunday night.

After Marcus Rashford, Jadon Sancho and Bukayo Saka missed penalty kicks at the end of the match, the three faced a torrent of “offensive and racist” posts on social media. Many prominent public figures have condemned the outpouring of bigotry, and the Metropolitan Police has said it is investigating at least some of the social media content.

“It is totally unacceptable that players have to endure this abhorrent behaviour,” William, who is president of the Football Association, wrote on the official Twitter account of the Duke and Duchess of Cambridge Monday morning.

“It must stop now and all those involved should be held accountable,” he wrote, signing the personal tweet with a “W” for William.

William has previously denounced the racist vitriol that many Black soccer players face.

In January, the royal tweeted that “racist abuse – whether on the pitch, in the stands, or on social media – is despicable and it must stop now.”

“We all have a responsibility to create an environment where such abuse is not tolerated, and those who choose to spread hate and division are held accountable for their actions,” he wrote, asking others to call out abuse when they see it and for social media companies to take more action. 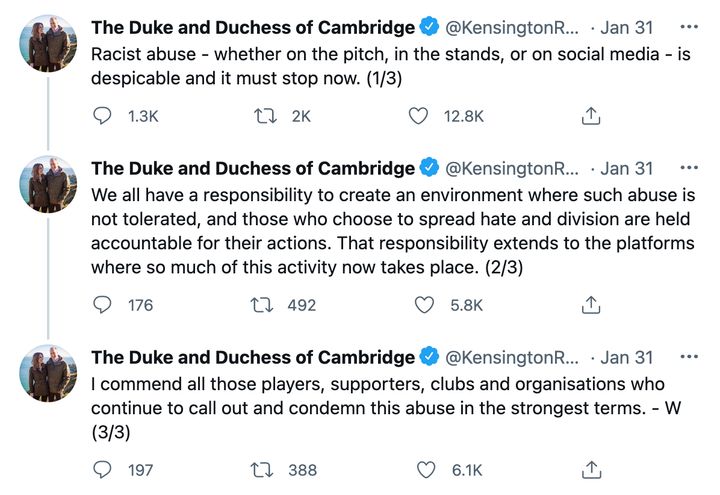 William’s comments regarding racism in soccer have received praise on social media, but many have also criticized him for not publicly defending his sister-in-law Meghan Markle, who is biracial, from the sexist and racist abuse she has faced both on- and offline.

The royal family is also facing its own allegations of racism. In March, during a bombshell interview with Oprah Winfrey, Prince Harry spoke about how much it hurt that members of his family wouldn’t speak up on Meghan’s behalf, even as she received public support from others.

“There have been many opportunities for my family to show some kind of support,” Harry said. “Female members of Parliament, Conservative and Labour, called out the colonial undertones of article and headlines written about Meghan.”

“And yet no one from my family ever said anything over those three years,” he went on. “And that hurts.”

“The way that I saw it was there was a way of doing things, but for us, for this union and the specifics around her race, there was an opportunity, many opportunities, for my family to show some public support,” Harry added.

Meghan and Harry also said that a member of the royals expressed racist “concerns and conversations” over how dark their son’s skin would be before he was born.

The Duke and Duchess of Sussex refused to name the family member who made those comments, though Harry did clarify that the remarks did not come from Queen Elizabeth or the late Prince Philip.

During an outing a few days after the Oprah interview, William said that the royals were “very much not a racist family.”