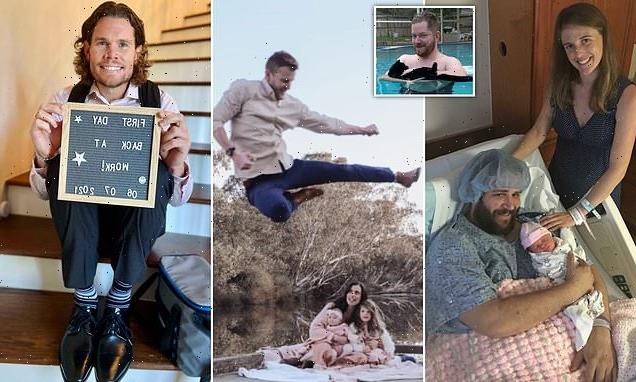 Are these the funniest husbands and boyfriends ever? Hilarious snaps reveal the antics of men who use humour to keep the spark alive – including a new dad who posed in the hospital bed as if he’d given birth

These men have proved that making your partner laugh is a great way to keep the spark alive.

Husbands and boyfriends from around the world have been snapped keeping their other halves entertained with their amusing antics, which have been collated in a gallery by Bored Panda.

Whether the prank was planned or they were caught in the middle of doing something silly, at least these pranksters can’t be faulted for their sense of humour.

Among the most amusing snaps is one man who posed in a hospital bed and pretended he was the one who had just given birth, while another posed for a ‘back to school’ photo on his return to work – complete with a lunch box and sign. 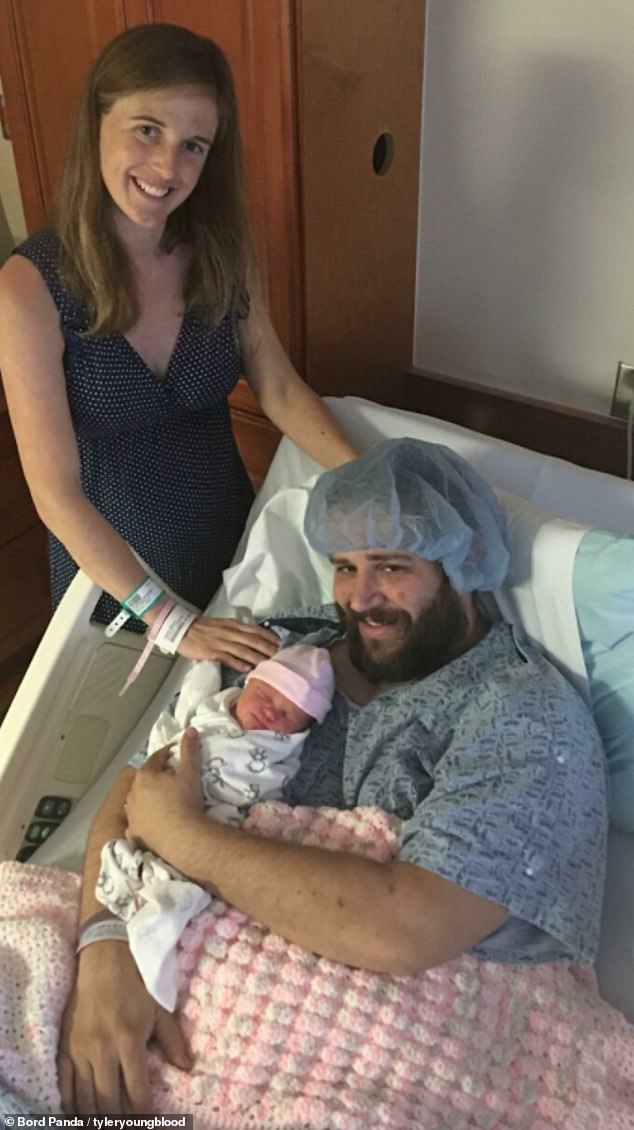 People have shared the hilarious antics their husbands and boyfriends have go up to in a bid to made them. Pictured, this new father from the US pretended he was the one who had given birth to his and his wife’s baby because he looked bigger than her after the delivery 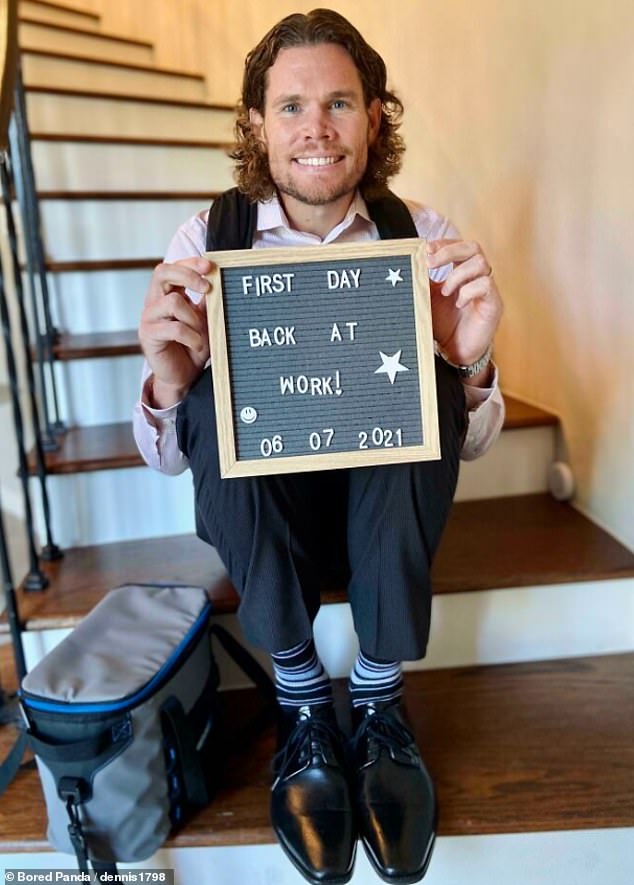 Proud moment! A husband from the US had a ‘first day back to work’ photoshoot with his lunch box – just like children have before going back to school 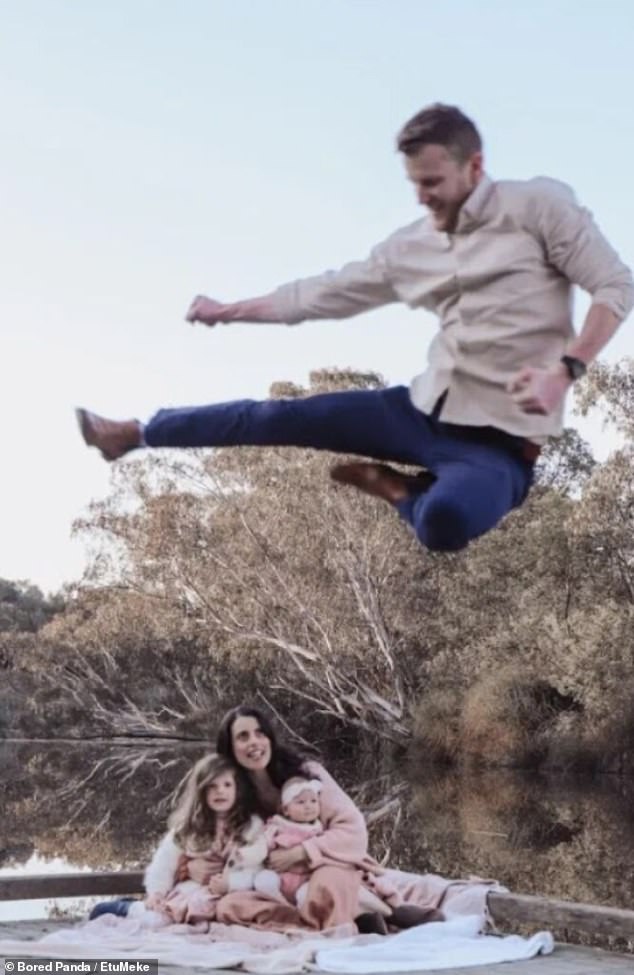 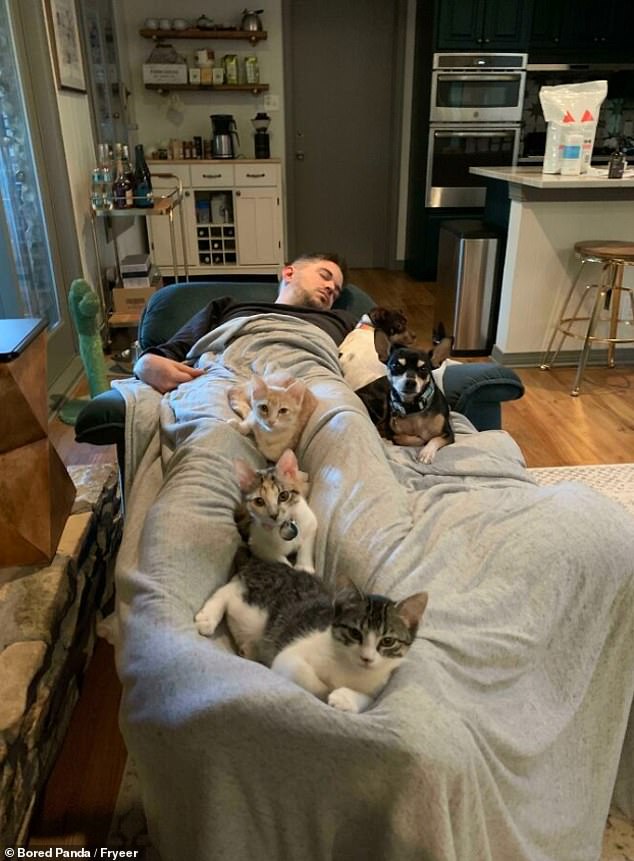 Just having a cat nap! In Texas, this man was caught red-handed having a nap while he was meant to be looking after the foster kittens 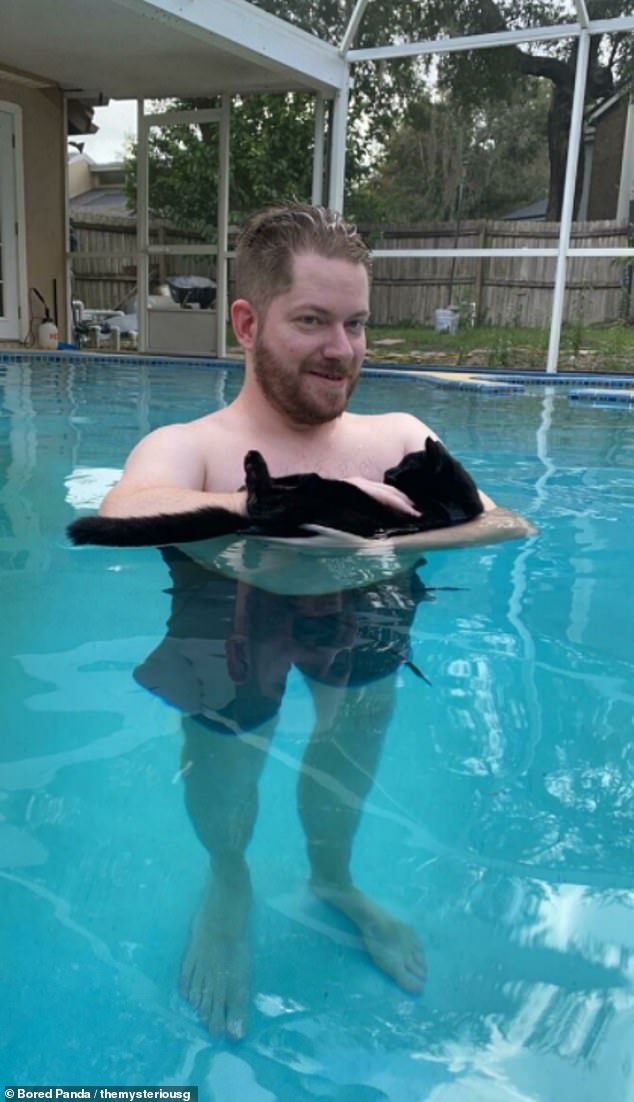 Taking it too fur? This man left his wife in stitches when he decided to take their cat for a cool down 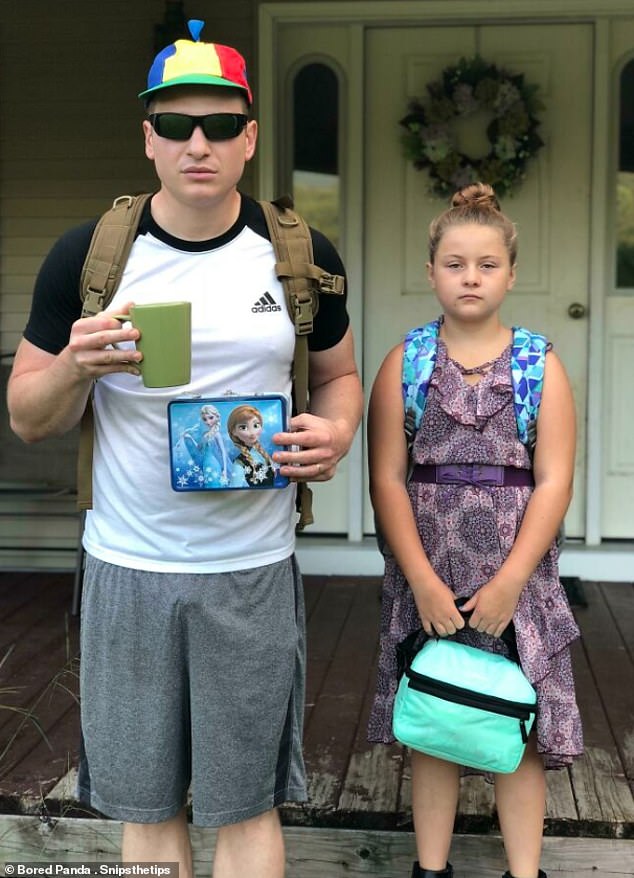 In Vermont, a dad who was starting his Masters degree the same day his daughter was going back to school had a ‘back to school’ photoshoot with her – and neither looked overjoyed! 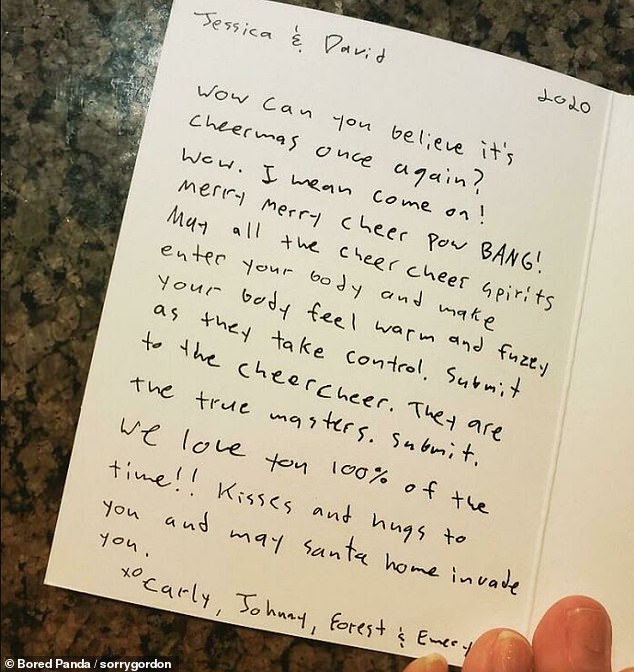 A touch of insincerity? A Canadian husband wrote this very enthusiastic Christmas card under the instruction of his wife 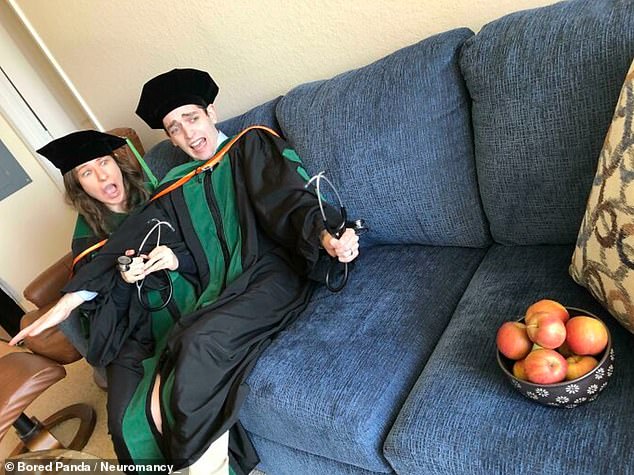 These two doctors celebrated their medical school graduation with an amusing snap based on the age-old saying: ‘An apple a day keeps the doctor away’ 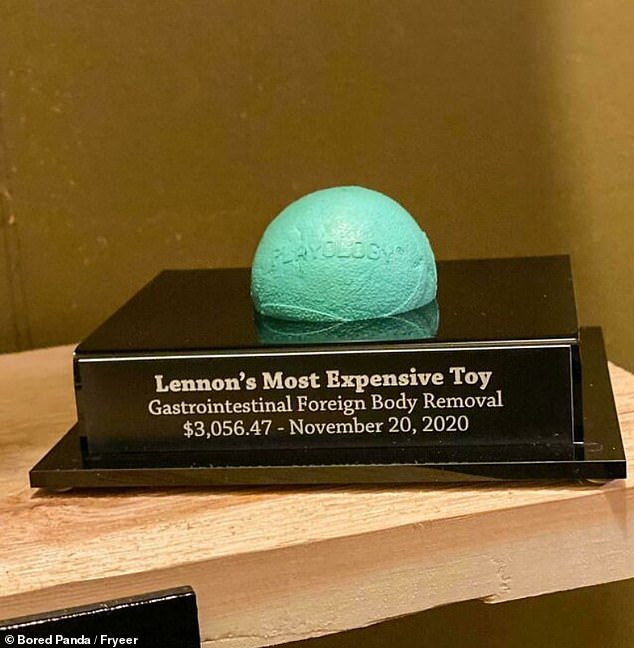 Not one for the mantelpiece? A man from Illinois made art out of a ball the family dog ate, which required an operation to extract 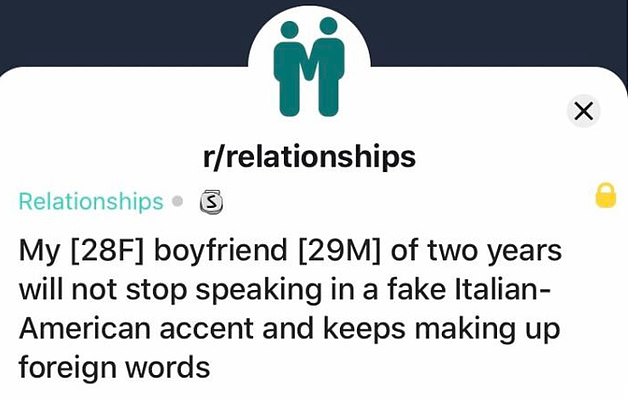 One woman claimed her boyfriend, 29, kept putting on a fake Italian-American accent when he spoke to her 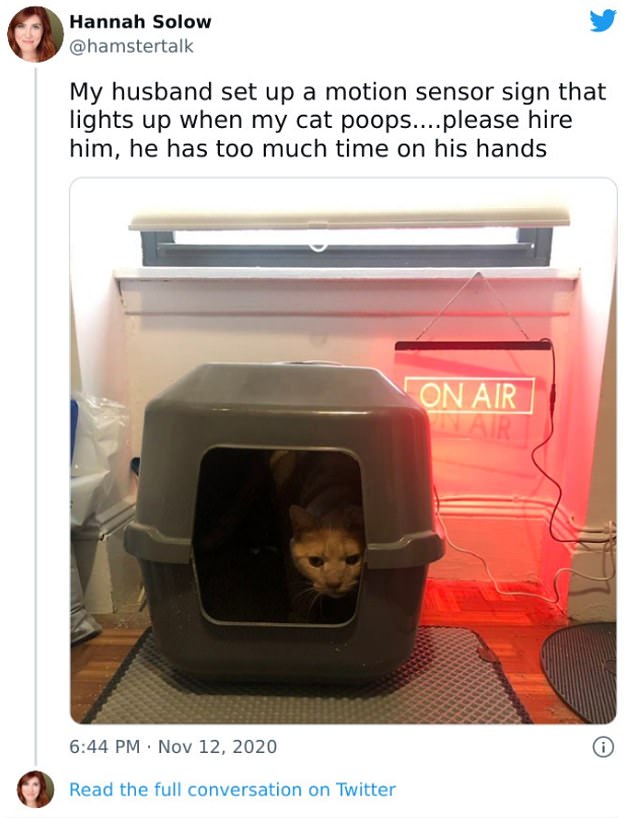 You’ve got to be kitten! A woman from New York revealed her husband equipped the cat’s litter box with motion sensors so it lights up whenever the cat goes in 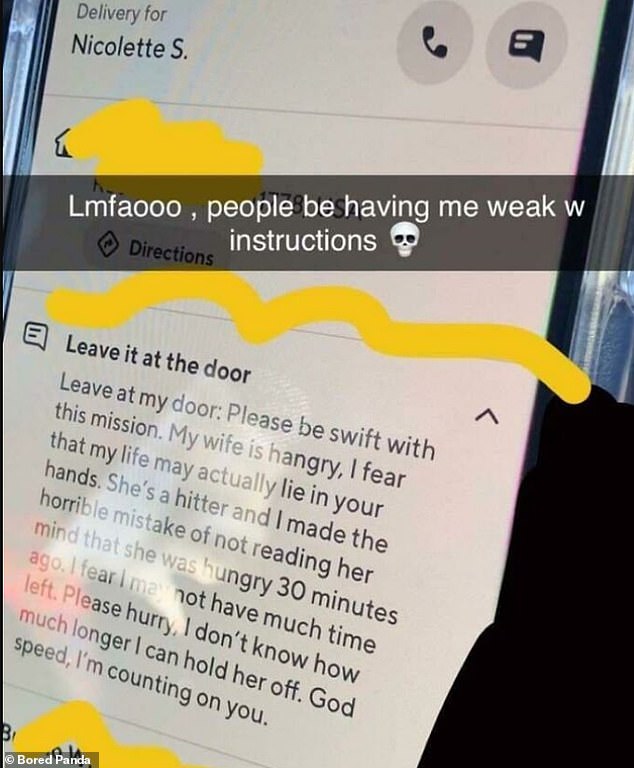