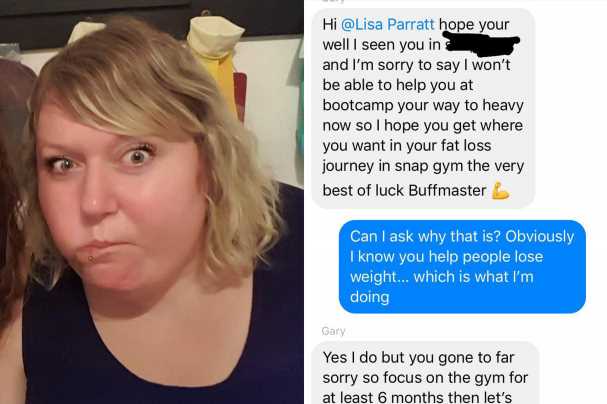 A 350-pound woman in the UK was rejected by a personal trainer who said she was “way too heavy” for his fitness class.

Lisa Parratt, 33, was mortified when workout instructor Gary Randall, who goes by the moniker “Buffmaster,” told her that she was “just too big” for his bootcamp program at UK-based gym Slimming World, which Parratt joined earlier this year.

The response over Facebook Messenger was devastating to Parratt, who has fought to lose 35 pounds since January. When she noted that to Randall, he replied that she still has “at least six months” more before qualifying for his course.

His comments are riddled with spelling and grammatical errors, to make matters worse.

“I’m sorry to say I won’t be able to help you at bootcamp,” wrote Randall. “Your way to heavy now.”

Parratt then asked the obvious: If he’s a personal trainer, can’t he “help people lose weight?” He responded, “Yes I do but you gone to far.” He then added, “Focus on the gym for at least six months then let’s see where your at.”

Not buying it, Parratt asked again for his “reasoning.”

“Your just to big for my bootcamp that’s all,” he said. “If you lose about five stone of fat [70 pounds] [I’ll] be able to help you achieve your goals.”

Parratt, who has anxiety and an emotional support dog to help her, told The Sun, “I don’t hide from my weight but I do expect a professional [person] delivering a professional service to give a better response than that. Why didn’t he come over and have a quiet word with me when he saw me?”

After spending a “night in tears” over the embarrassment, she ultimately decided to post the exchange on Facebook to “raise awareness.”

“I was worried that if he said something like that to the wrong person, they might not be here now,” she said. “I wanted to raise awareness so I posted it on Sunday night a few hours after his message.”

Randall also took to Facebook to defend what he calls an “honest” approach to his work.

“Always best to be honest in my business sometimes brutally #teambuffmaster.”

Randall also talked to The Sun: “She is a very silly woman. She is the one making herself look a fool.”

He said the situation had been “blown out of proportion.”

Parratt says she’s been “overwhelmed” with the support she’s received on social media, including the many offers of gym memberships and training sessions by other, more willing fitness instructors.

“When it first happened I just wanted to give up,” she said, “but now I am determined to prove him wrong.”