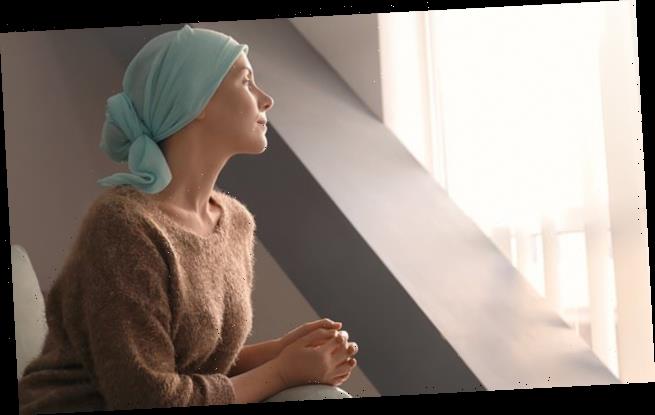 People who have been diagnosed with terminal illness have revealed what it really feels like to know your life is gonig to be cut short, and for some the news was not as devastating as you might imagine.

Taking to the Q&A site Quora, people from around the world suffering with incurable diseases shared their stories in response to the question: ‘Is it abnormal to be glad you’re diagnosed with a terminal illness?’

Many said that after initial shock, the news had motivated them to make the most of their remaining days, and spoke of suddenly having a sense of ‘freedom’ because everyday worries just don’t matter anymore.

One man dying from brain and bone cancer said that once he’d come to terms with the news, the ‘world just lifts off your back’.

Others said they had welcomed their diagnosis because it confirmed fears they had abut their health, and finally freed them from any uncertainty. 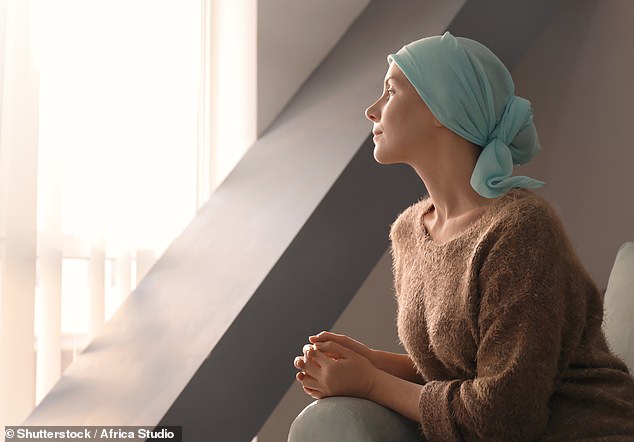 One man wrote: ‘I’ve got terminal brain cancer and bone cancer but for me, the first thing was feeling sorry for myself, I was never in denial but either you accept the situation or you’ll drown in the misery of the situation,’ he wrote.

‘You don’t have to like it but once you accept it and come to terms with the fact that your not the indestructible force you thought you were, well it feels like the world just lifts off your back.

He added: ‘In some strange way, knowing from the start that this was incurable[…] took the stress out of the situation.’

Another woman from Florida said that a friend of hers who had been diagnosed with terminal cancer in her 30s had the same reaction, realising she just didn’t have to put up with the things that weighed her down anymore.

Others said they welcomed knowing from the start their conditions were incurable, as it was giving them time to prepare for the unavoidable

‘She told me her first reactions were the usual, shock, denial, “why me?” etc. Then, after a couple of days, she said she felt a sense of “freedom”.

‘She said she realized that because her time was short, there was a lot of BS she didn’t have time for and therefore didn’t have to put up with, anymore. And she didn’t,’ the woman explained.

Another respondent from Florida answered the question, saying it’s ‘not abnormal to feel happy’ when diagnosed with a terminal illness.

‘My belief is that you come here- to this school called earth- to find out who you are and do what you came here to do and when you feel done you get to leave joyfully,’ she said. 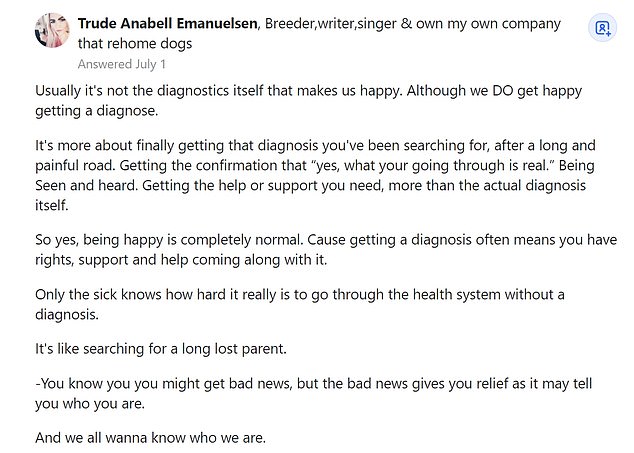 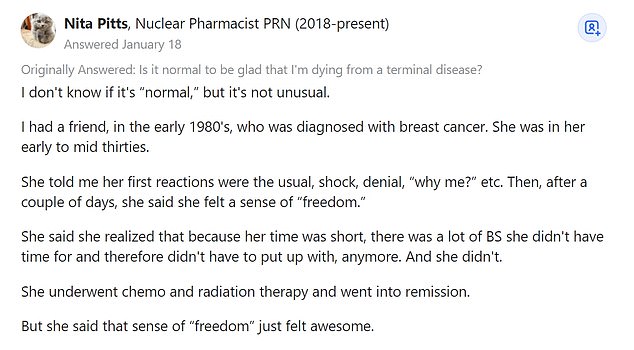 Others argued that a sense of happiness comes from the relief of finally getting a diagnosis that validates your fears.

One woman from Europe wrote that many are diagnosed after a ‘long and painful road’ and it’s confirmation that ‘what you’re going through is real’.

She added a diagnosis also led people to get the help and support they needed, and makes them feel ‘seen and heard.’

‘So yes, being happy is completely normal. Beause getting a diagnosis often means you have rights, support and help coming along with it,’ she said.

‘You know you you might get bad news, but the bad news gives you relief as it may tell you who you are.’

Another person, from Australia, agreed that getting confirmation that something was wrong with their body could give people a sense of relief if there has been long-term suffering.

‘The relief to find out it wasn’t all in your head and that it won’t last “forever” can be major,’ they said.

Another woman with Stage IV cancer explained that she initially felt like a ‘deer caught in the blinding headlights’, but said that it’s important to find happiness despite the situation.

‘Once the shock of the diagnosis wore off, it then became a matter of attitude,’ she added.

‘Keeping a positive attitude goes a long way towards fighting and dealing an with an incurable terminal illness.’

However, others did not share these opinions and said they had been devastated to hear their own diagnosis.

‘I’m sorry to hear that you have a terminal disease and even sorrier that you are glad,’ said a US-based retired teacher who was diagnosed with Parkinson’s Disease.

‘I have one too, Parkinson’s disease, it kills you slowly. But I am not happy about it. I accept it because I have no choice, it is what it is,’ she said.

A woman with breast cancer revealed she asked her oncologist if she could cry when she heard the news, before ‘breaking down for a few minutes.

‘Who wants to be sentenced with a terminal illness when you’re just about to fully experience life? (I just finished my PhD and was on track for a good research position at the university),’ she added.