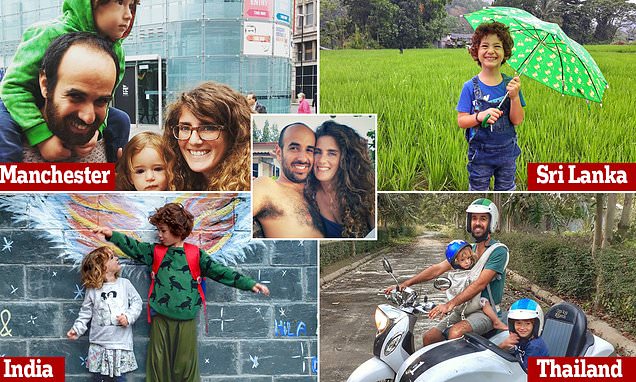 A couple who had no savings have revealed how a shock funeral inspired them to change their lives and travel the world.

Full time mum, Natasha Biran, 33, was born in Manchester, and moved to Israel in August 2008. She met her husband, Yair, 33, in 2009 and they got married in September 2012. They have two children together Maoz, 5, and Geshem, 2, who they home-school during their travels.

Tragically, in May 2018, Natasha’s father passed away and the family took a sudden and expensive trip to England for his funeral.

But the couple, whose jobs as digital writers and translators allows them to work remotely, say the death was a wake-up call, and gave them the motivation to give up life in Israel to travel full-time. 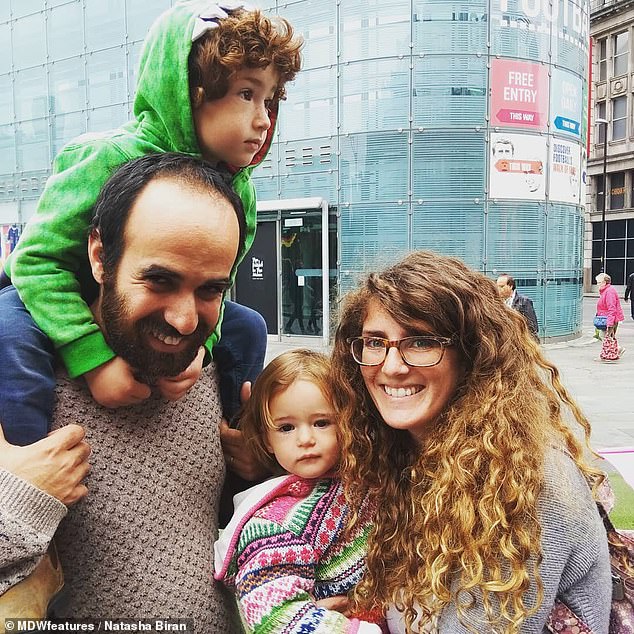 Natasha Biran, 33, was inspired to leave life in Israel behind after the sudden death of her father. She has been travelling for the past year with her husband Yair, 33, and two young children Maoz, 5, and Geshem, 2. Seen in Manchester 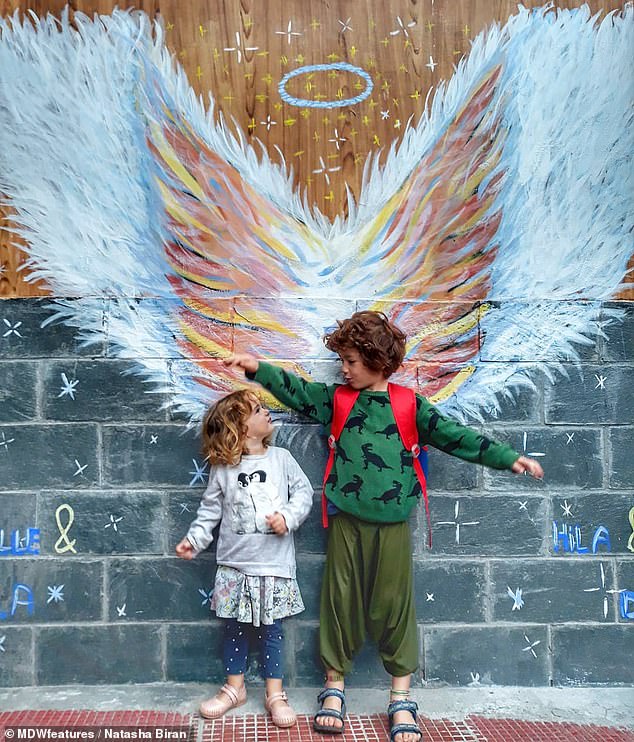 The adorable family have been travelling for the past year, with Natasha revealing her children are loving the adventure (pictured in India)

Luckily the couple were both already working as online translators, editors and writers, and so were in the perfect position to become digital nomads.

A digital nomad is someone who can make their living online and so is free to move where they wish, thus being location independent, but internet dependent.

Speaking about her new lifestyle, Natasha said: ‘I love peace and quiet but I’m also really sociable. The most important thing to me is to live my life with gratitude and love.

‘I’ve always loved travelling. I chose my degree in American Studies with Literature, History and Politics based on the sandwich year in Arizona, USA. It was the best decision ever.’ 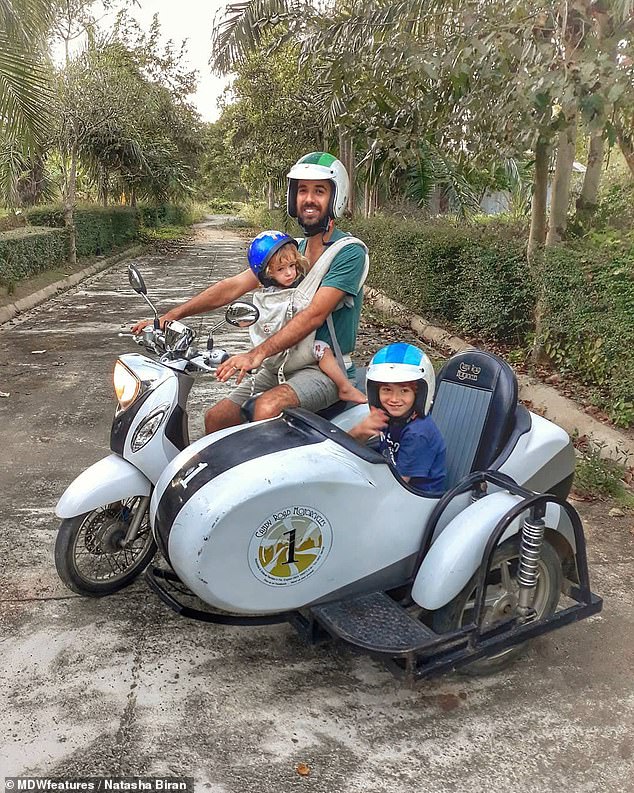 One of the couple’s favourite destinations was Pai, in Northern Thailand (pictured Yair with Maoz and Geshem) 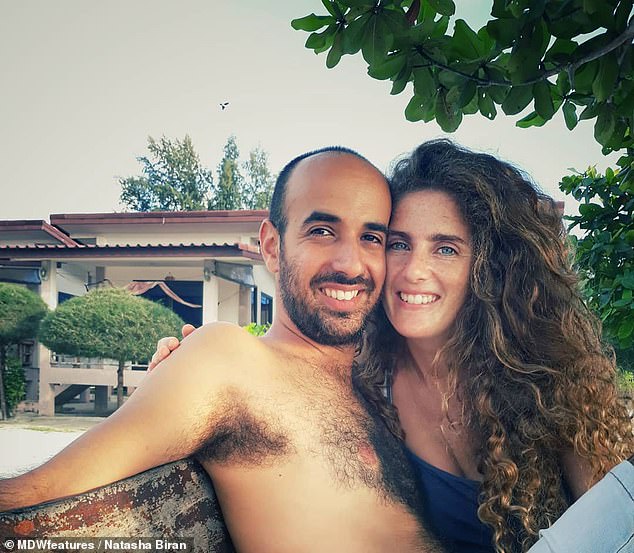 But tragically, in May 2018, Natasha’s father passed away suddenly in England.

The mother-of-two explained: ‘In Jewish tradition the funeral happens as soon as possible. We spent a small fortune flying to England for his funeral and from there our journey just began on its own.’

She revealed: ‘We didn’t make any special steps to save money to pay for our travels, but we make enough monthly to cover all of our costs.’

Besides being a full-time mum, Natasha also works as a part time translator, editor and writer online. 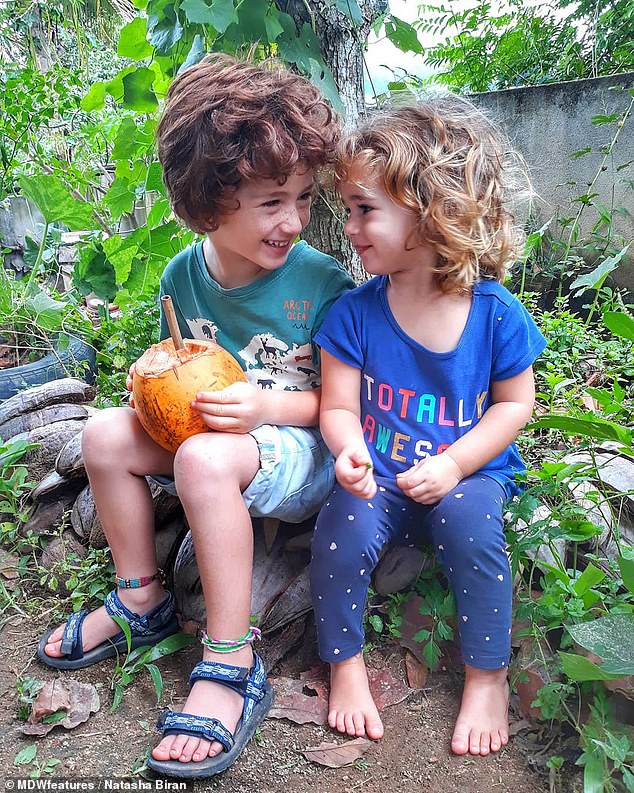 The family are dedicated to living a flexible life with their young children, and spend a few weeks in each place at a time (pictured Maoz and Geshem in Sri Lanka)

She explained: ‘This gives us the flexibility to work and travel. It’s also known as being a digital nomad.’

Since the family left Israel in May 2018, they have travelled to England, Germany, Thailand, Sri Lanka and India.

One of the biggest lessons of they’ve learnt on their travels has been how to keep their relationship strong while being around each other all day, every day.

Natasha revealed: ‘Pai in Thailand is a type of heaven on Earth for us. It’s absolutely perfect for little kids and attracts amazing people. It’s incredibly beautiful and has lots of things to do. 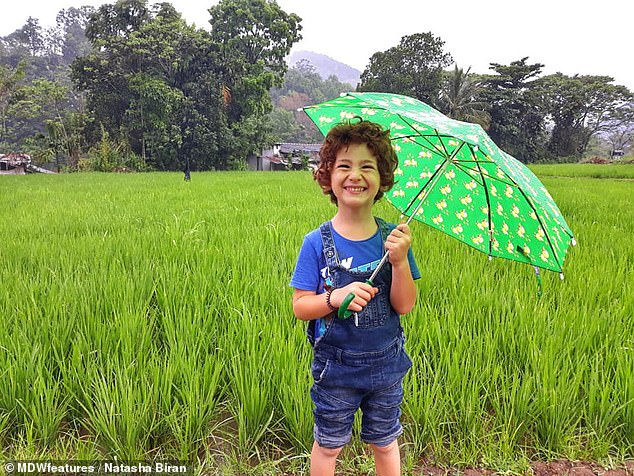 They are now home-schooling their children, with Maoz, 5, telling his mother he wants to travel ‘forever’ (pictured in Sri Lanka) 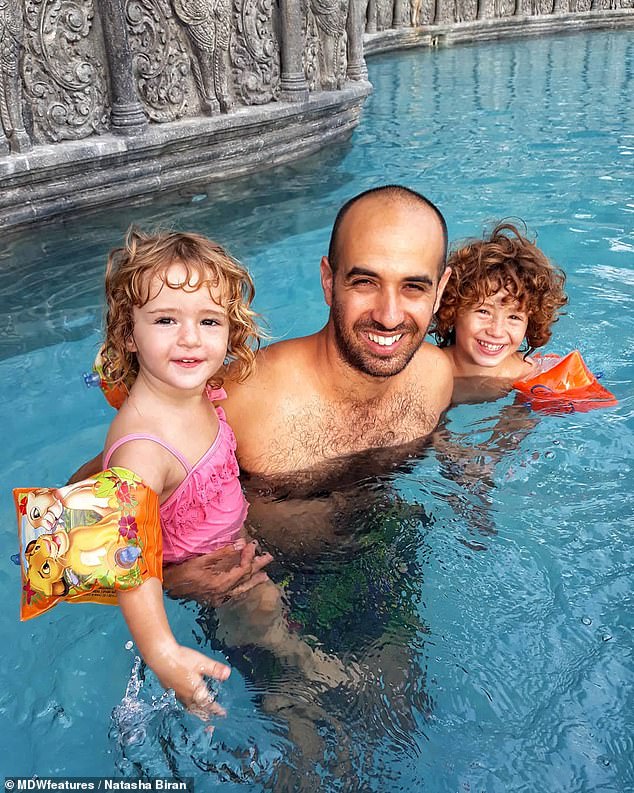 The nomad family rarely know where they will travel to next, and only book their flights a week in advance (pictured in Koh Phangan)

Also, in northern Thailand are the sticky waterfalls. This was a total nature highlight, you can actually really easily climb the waterfalls.’

‘The food highlight of our travels so far has got to be Sri Lanka and the people there are the nicest on Earth. They really love children.’

But despite how heavenly the trip may sound, Natasha admitted the couple still face challenges like any couple.

She said: ‘I think the main challenge of our lifestyle choice is when Yair and I have our moments. 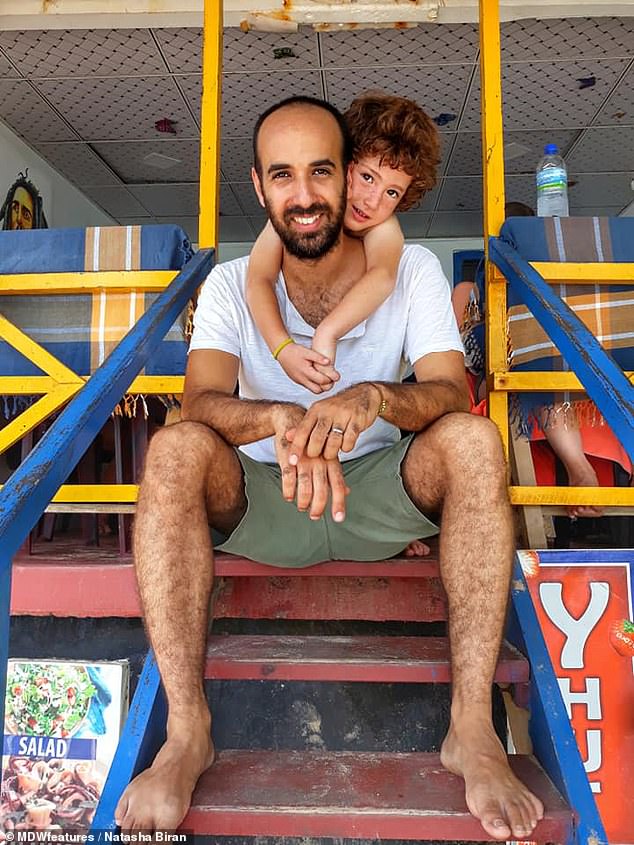 The family, who had no savings at the beginning of their trip, are keen to show travelling doesn’t have to be expensive. Father and son in Sri Lanka 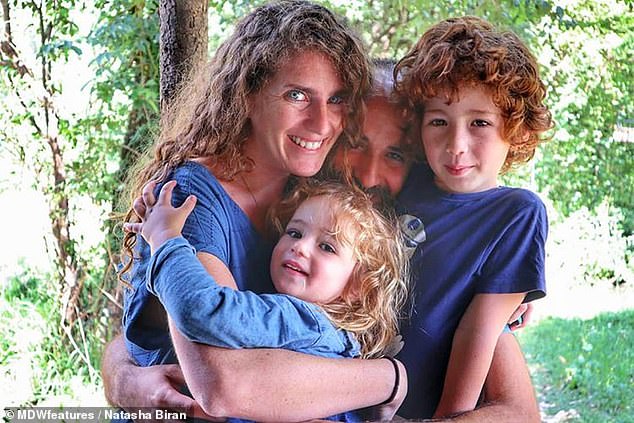 Natasha admitted sometimes the dynamic of family life can be difficult, but that her children are becoming closer through the experience. Pictured on holiday

‘We’re really committed to creating a harmonious environment for the family but naturally when we spend most of our time together, conflicts do arise. We’re both learning how to communicate more consciously and take time for ourselves.’

Meanwhile she said her children had adapted ‘amazingly’, saying: ‘They love travelling. Geshem was really little when we started travelling so this is just life as she knows it.

‘Maoz tells me he wants to travel forever. He has been on a total inner journey, he’s become really flexible and open.’

She also admitted the trip had improved the relationship between the two young children, saying: ‘The journey has created so much space for meaningful interaction between our children and their relationship has really developed, they are really close and share a lot of love and fun together. 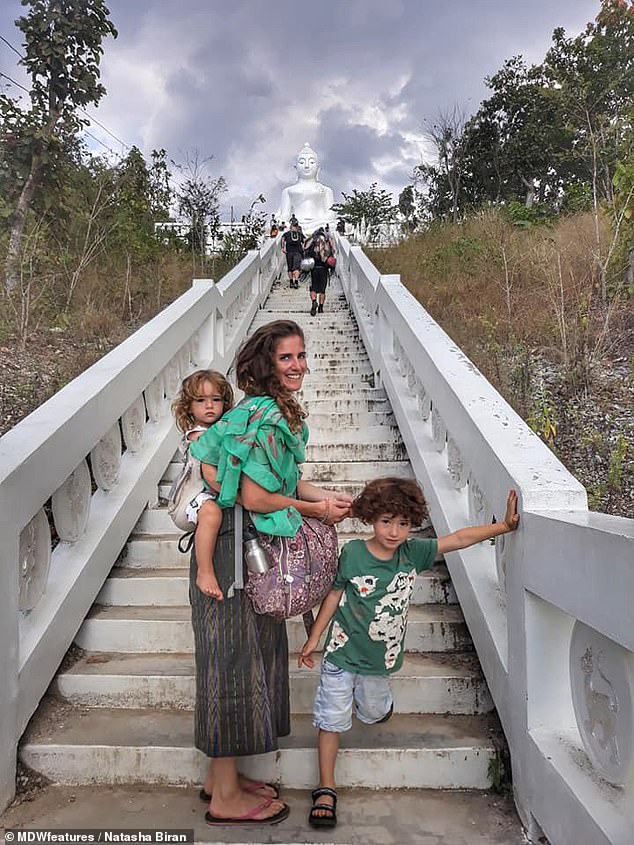 Natasha admitted the family had no idea how long they would keep travelling for, as she and Yair are able to make a living online (pictured, Natasha in Thailand with Maoz and Geshem) 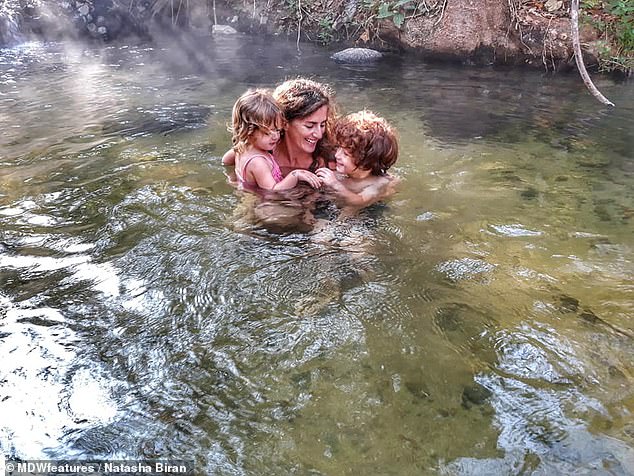 Natasha juggles travelling with online work, as well as home-schooling her children while they’re on the road, seen swimming abroad

As well as juggling her work, Natasha says she home-schools her children on the road.

She explained: ‘Maoz is only five and back in Israel kids don’t actually start school until they are six years old. They’re both really sociable and curious about the world and learn so much from all the experiences and people they meet along the way.’

The couple admit they don’t know how long they will continue travelling for, and say they generally book their ongoing travel shortly before leaving a place.

‘We don’t know how long we will keep travelling for, we are always checking in with ourselves that our hearts are leading us and that our actions feel right for us as a family,’ said Natasha. 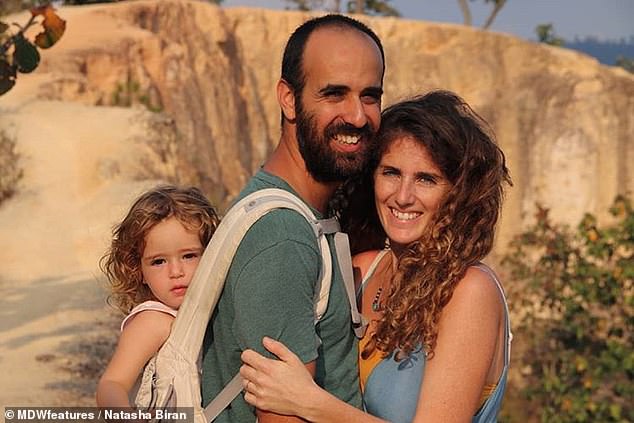 The couple revealed they felt as though the ‘actions felt right’ for them as a family, and say they don’t know how long they’ll travel for. Natasha, Nair and Geshem in Pai. 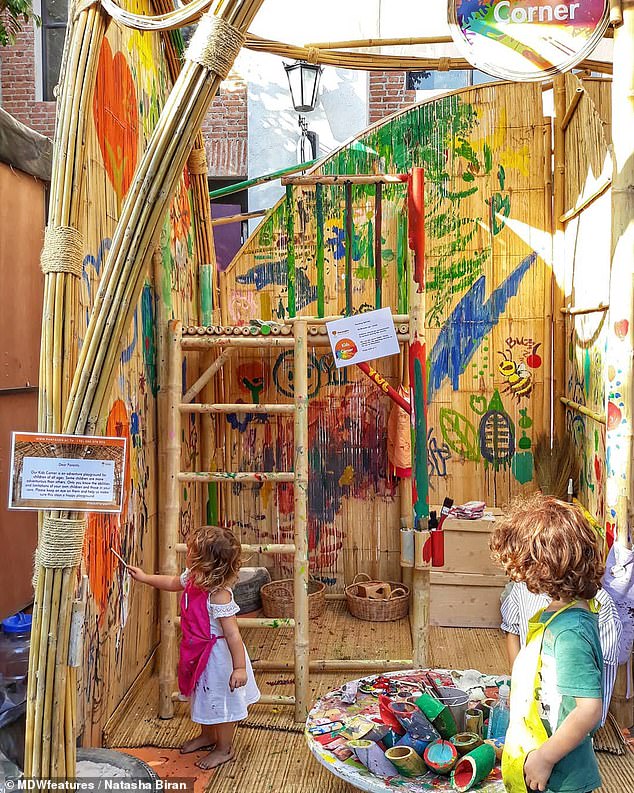 Natasha said she felt her children had become really sociable and curious about the world following their time travelling. Geshem and Maoz having fun painting in Chiang Mai.

‘We’ve learnt not to make any sweeping statements about the future as we never know what will happen.

‘We live a lot in the present and usually book our flights to new places about a week before we travel.

‘Our family have been supportive, but they really miss us. We equally miss them a lot too and really hope they’ll come visit us soon.

‘We like to travel slowly and spend at least a few weeks in each place. Our movement doesn’t come from our will but from our intuition which is where I got my Instagram profile name from @trustingtheway.’ 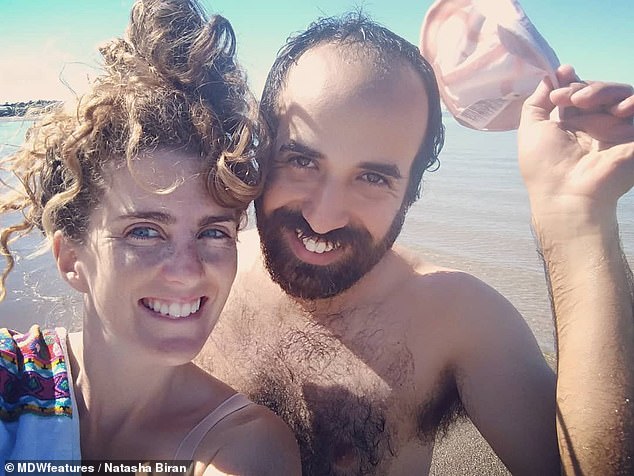 Natasha admitted that she and Yair still have their moments, but that they’re committed to creating a harmonious, seen in Wales 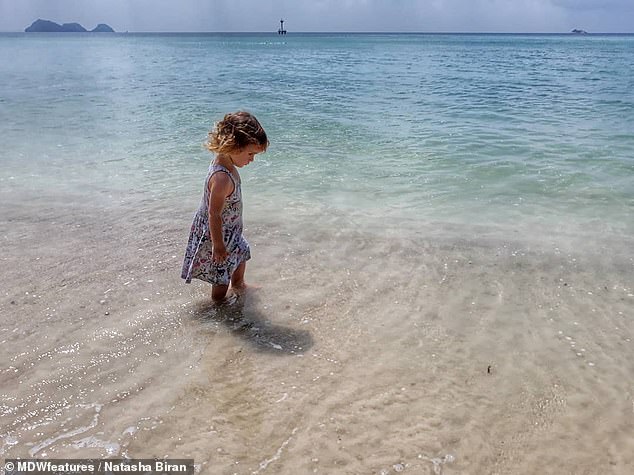 Keen to inspire others who may want to make a similar life change, Natasha admitted it was important to have ‘patience and trust’.

She added: ‘We really can turn our dreams into reality. We just need to know what it is we want and ask for it.

‘You can travel the world without tons of money. Our hearts are the wisest compasses in the history of humanity and we’ll all be happier if we listen to them.’