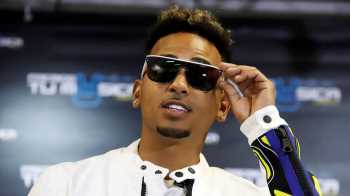 Jennifer Lopez, Daddy Yankee and Ozuna (pictured) are among the headliners set to perform at the 2019 iHeartRadio Fiesta Latina, iHeartMedia announced Tuesday morning. The event is set for Saturday, Nov. 2 at Miami’s American Airlines Arena.

The festival, which is in its sixth year, will be hosted by Enrique Santos, chairman and chief creative officer of iHeartLatino and on-air personality for iHeartRadio. It’s his fourth consecutive year hosting the concert.

Said Santos: “We are thrilled to welcome one of the most important young artists in Spanish Language Pop, Ozuna, as well as the acclaimed ‘Big Boss’ of Reggaetón Daddy Yankee and one of the most successful women in entertainment, the one and only Jennifer Lopez.”

Reggaetón artists Daddy Yankee and Ozuna recently teamed up on latin trap star Anuel AA’s newest song, “China,” a Spanish language remix of Shaggy’s “It Wasn’t Me” along with J Balvin and Karol G.  The two also made an appearance in the song’s music video, which was released on July 19.

Lopez’s fall schedule includes her new film, “Hustlers,” opening in September and following the end of her It’s My Party world tour.