As a record-breaking heat wave gripped Oregon in late June, a diner at a Red Robin burger joint sent an urgent message to the state’s OSHA office: Every worker in the restaurant appeared to be in danger.

“Hot air is pumping out of the vents like the heater is on,” the customer wrote the day after their visit. “I asked my server to move me but she explained that the AC units are not working properly and the owners will not fix them.”

The customer said it was 100 degrees inside the dining area and apparently even hotter in the kitchen.

“My server told me they were still forced to go to work and the only [extra] compensation they got was Gatorades,” the customer wrote to state Occupational Safety and Health regulators. “This is extremely hazardous.”

The heat-related safety complaint was one of more than 100 that Oregon OSHA received during the last week of June, all of which HuffPost obtained through a public records request. The complaints reveal workers around the state feared for their lives as they clocked in amid temperatures as high as 116 degrees, often without sufficient breaks, water or air conditioning. The complaints came from workplaces of all kinds: restaurants, retail stores, car washes, warehouses, construction sites and manufacturing facilities.

The records offer a frightening glimpse of the dangers workers across the country will face as heat waves become more frequent and extreme due to global warming. The conditions can be even more hazardous in mild climates like Oregon, where many workplaces aren’t necessarily outfitted for high heat.

Dozens complained of busted air conditioning units that employers hadn’t fixed. Many said they were required to continue working even when it felt unsafe. Some said they were reprimanded for taking unauthorized breaks in cooler areas of their worksites.

The names of complainants were redacted. Although anyone can submit a complaint to OSHA, most appear to have come from employees as opposed to members of the public. In most cases, investigators would not have determined yet whether an employer violated the law.

The hazards were so prevalent that on July 8 Oregon OSHA implemented an emergency heat rule requiring employers to provide access to water, shade and adequate breaks during severe weather, as well as training on heat stress. The state is working on crafting a permanent rule.

‘The AC System Is Broken’

The fast-food industry drew a large share of the complaints. Pleas for help poured in from McDonald’s, Burger King, Pizza Hut, Little Caesars, Jack in the Box, Carl’s Jr., Subway and Chipotle locations. Again and again, restaurant workers said they were forced to work in scorching-hot kitchens without adequate air conditioning, according to the hazard descriptions in the complaints.

From a Pizza Hut:

Extremely hot inside. Employees are being made to work near ovens and wearing masks without air-conditioning working inside the building. It’s extremely dangerous. No modifications are being made to mitigate the high potential for the heat exhaustion.

The air conditioning is not working. Employees are exposed to extreme heat conditions and have been experiencing heat related illness symptoms. The business does not have fans, employees are not given extra breaks or a cool place to rest.

The restaurant management is forcing employees to work without air-conditioning in dangerous heat. The temperature in the building is at least 100*F. Employees are covered in sweat, and are showing signs of heat exhaustion.

From a Burger King:

Employees are working in 100 degree or higher heat with no air conditioner in a hot humidity kitchen for two years. In the past, employees have fainted from working in this kind of heat and employees can’t call out if they feel they aren’t able to work.

From another Burger King:

110+ Degrees in the kitchen over the past few days. The AC system is broken and the employer will not fix it. This is when it’s been 101+ outside. Employees are forced to work nonetheless, no matter the heat hazard.

Thermostat for AC not working and had requested to have this fixed previously and management did not address it.

Plenty of workers wondered why their restaurants were still open while they seemed so ill-equipped to handle such weather. One complaint alleged that management at a pub in Wilsonville threatened to fire anyone who left because of the heat. The complaint claimed the temperature was above 90 degrees in the dining area and above 110 degrees in the kitchen: “They eventually closed but not until someone from the public complained and threatened to make a complaint.”

One complaint alleged that there was no air conditioning inside a Portland restaurant, leading to temperatures above 90 degrees. Workers ended up retreating to the walk-in refrigerator for relief.

“But the manager locked the door to keep employees from using the only way that was available for them to cool off,” the complaint states.

Workers at another Portland restaurant apparently pleaded with managers to close, to no avail: “Many employees almost passed out, and begged the management to close the restaurant, but they were told that the company doesn’t want to lose money.”

At a Eugene restaurant, a complainant reported that “the entire kitchen staff (10-15 people) are feeling ill and exhausted from multiple days working in these extremely hot conditions.”

HuffPost readers: Have you endured extreme heat at work? We’d like to hear from you. Email our reporter here.

One worker said a temperature of 95 degrees was recorded near the fryer inside a doughnut shop in Portland, even though the air conditioning was running: “Some employees reported feeling ill from the heat. Symptoms included headache, nausea, bloody nose, and feeling foggy.”

Some parts of the store were cooler than others: “The break room and yeasting area [were] closer to 85 degrees.”

‘Employees Are Said To Be Passing Out’

That’s much cooler than the conditions detailed at a greenhouse in McMinnville. A complaint alleged it was 20 degrees hotter inside the greenhouse than outside, and that workers weren’t getting enough breaks:

“No fans inside the greenhouse. The employer is not providing a place for employees to cool down. The employees asked management if they could come in early so they could leave early to avoid the heat and were denied.”

Someone from a cannabis dispensary said it was 104 degrees inside their facility. “No air conditioning in a black building,” the complaint reads.

A complaint against a car wash in Scappoose alleged that one worker ended up sick with heat exhaustion. “The employer did not respond to employees who tried to bring this problem to his attention,” the complaint reads.

Multiple complaints were filed against a canvassing agency that raises funds for nonprofits. The complaints said workers were going door-to-door or soliciting on the street with little access to shade. It’s not clear if all the complaints came from the same person.

“Canvasser looked exhausted and chapped and had ran out of drinking water and did not know where to get more,” one stated. “The canvasser did not know how to identify the signs of heat stroke.”

Someone reported to OSHA that dancers at a Portland gay club were “prone to heat exhaustion, dehydration, and potentially heatstroke” in the poorly ventilated basement where they got changed.

Factories and warehouses also turned up frequently in the files. One complainant said a worker at a Portland food manufacturer fainted due to heat exhaustion. The air conditioning was inadequate, they wrote, especially near the ovens: “Temperatures can be 10 to 20 degrees warmer on [the] floor than outside.”

A complaint against a warehouse said that workers were struggling to carry out basic tasks, and that the facility was too large for workers to easily step outside for fresh air: “Employees are said to be passing out and dropping things due to the heat.” A complaint against another warehouse said only the break room had air conditioning, but when workers tried to take advantage of it, “they are being reprimanded by the manager.”

As if the record-breaking temperatures weren’t enough, some workers were apparently concerned about another byproduct of climate change: increased wildfires. One complaint alleged that roofing and sheet metal workers on a job site in Klamath Falls were working in triple-digit heat while the Tennant and Lava fires burned over the state line in California. They were worried about poor air quality on top of heat stress.

“Little to no shade and no breaks for a long period of time,” the complaint said. 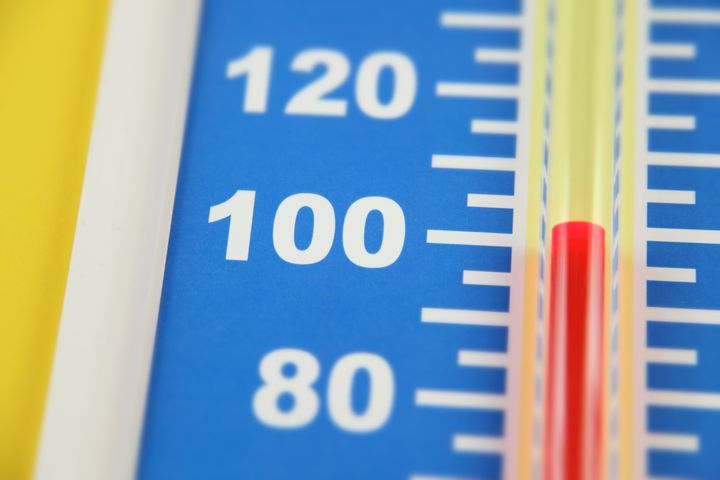