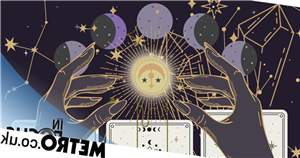 When Emma Carney gets up, she welcomes the dawn by lighting a candle and pulling a Tarot card from her much-loved deck. She makes an ‘intention’ for the day, and reflects on how she will achieve her goals.

Then, the 36-year-old owner of a digital marketing agency will make herself a coffee and decide what she wants from her day. ‘If I am trying to manifest money in abundance I will burn a bit of cinnamon and stir my coffee with it’, she explains.

Throughout her work day, Emma will make time to light incense, cast spells and perform ceremonies. ‘Everything’s just got to have a little magic added to it,’ she says with a smile. ‘It’s just how I live my life.’

Emma is a successful businesswoman. She is also a witch. Her daily rituals and ceremonies help her to fulfil her potential and bring joy and meaning to her world, she says.

And she’s not alone. Witchcraft is having a revival, with Emma being just one of a growing number in the UK who pair normal, professional lives with making potions, casting spells and meeting in covens.

Head to Instagram and you’ll find the @TheHoodWitch, a tarot reader who provides ‘everyday magic for the modern mystic’, who has 474k followers. Meanwhile, #Witchtok videos have had more than 25 billion views.

Even the authorities are recognising witchcraft. Last month, Cassandra Latham-Jones became the UK’s first official witch, when the 71-year-old from Cornwall was permitted to use the term ‘village witch’ on her tax return, while Nicola Sturgeon issued a posthumous apology to the thousands of people persecuted as witches in Scotland under the Witchcraft Act of 1563.

With apps for moon work, Tarot and Astrology and subscription boxes where gems, oils and spell kits magically arrive by post, it’s clear that the occult has fully embraced our digital age. 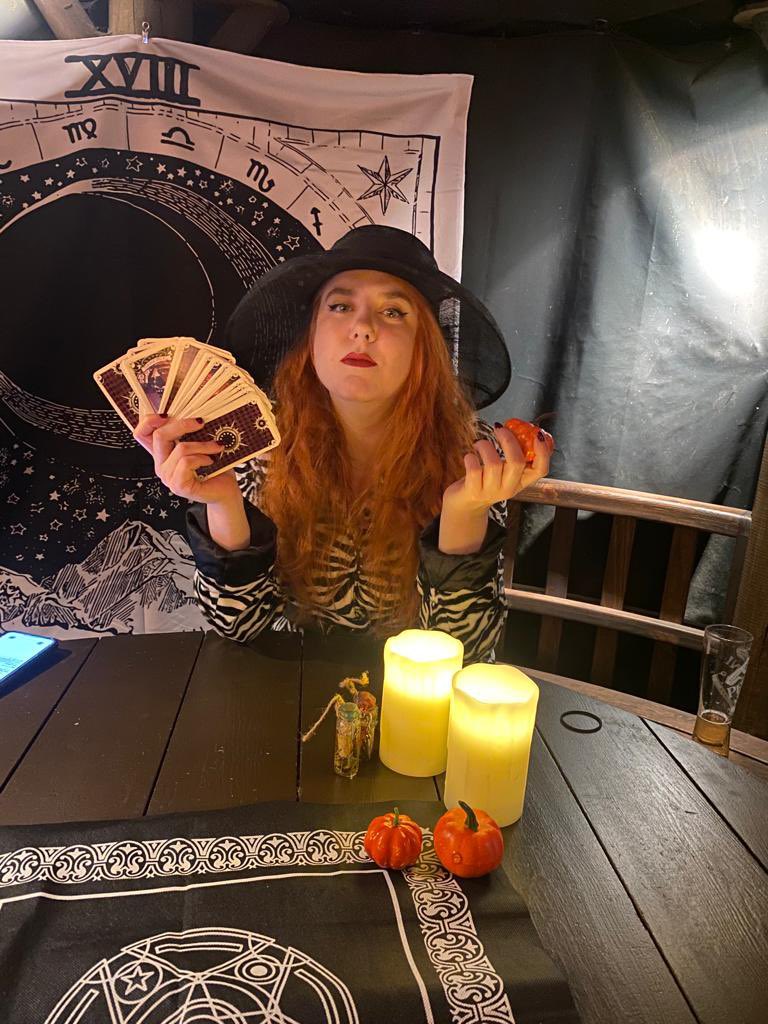 ‘Witchcraft is basically owning your own power and comprehending how you can control the world around you based on understanding who you are and what you want,’ explains Emma. ‘A lot of people, when they hear about witchcraft, get confused by the language of magic and spells.

‘But really, what it actually is, is just a way of taking your power and utilising your mind to achieve the things you want by performing certain actions. So this can be relatable in meditation and manifestation. Magic has now gone online and everybody’s a lot more open talking about witchcraft.’

Emma says she has been a witch since she was born. In 2020 she set up a digital coven with her friend Ashleigh-Jayne O’Connell, who describes it as an online ‘witchy space’ where people can hang out and share ideas.

Ashleigh-Jayne lives in a flat in East Finchley crammed with herbs, crystals, books, candles and incense.  The 33-year-old social media manager has been a witch since she was 15, and says: ‘Witchcraft to me is bringing an element of balance. We all have crazy, busy jobs and crazy, busy lives. It gives me something to focus on for myself and to make myself grow as a better person. And also do as little harm to the world around me as possible.

‘My neighbours know me as the girl who does the litter pick down the street,  but also the one who will be sat in the front garden on a full moon burning stuff,’ she adds. ‘I’ve got my tiny little cauldron. And I burn things with corresponding herbs to complement that energy.’

As well as running the coven, the pair are setting up an online book club, ‘Witchy Type’, where they can share spell books and review texts. And they have a WhatsApp group where people can ask questions and share ideas.

‘We recently had someone who had a job interview and they wanted to charm an item of clothing to bring them some luck for example,’ explains Ashleigh-Jayne. ‘So we helped them charm their glasses and they got the job.’

‘John’ is also a witch, but is using a pseudonym as he is still in the broom closet.

The 53-year-old from Exeter works in IT, but doesn’t want his employers to know about his involvement in witchcraft and he hasn’t revealed his passion to all of his family yet. Except his wife – who is also a witch.

John explains that he got involved in the movement as a means to find balance in a busy life.

‘I was absorbed into it last year,’ he says. ‘It just kind of happened after I went to a couple of sabbaths and esbats – witch gatherings – with my wife. I have aspirations of getting to know more about herbs from a medicinal point of view.’

John adds that he is also ‘attracted to the lore, the history and the mythology.’

‘It is different and interesting,’ he explains. ‘I have issues with the control exercised by a lot of major religions. In witchcraft, certainly in our coven, there is no control. It is far more open and less judgemental.’

As someone who enjoys listening to podcasts about herbalism, John says there are a number of online courses that can help people learn how to make medicine from plants. He also follows foragers on Instagram.

‘I have an interest in nature and wildlife and using the tools at one’s disposal without having to use all the artificial stuff,’ he adds. ‘I think people rely on medicine as the first port of call too often. Herbalists would prefer to use the plants where a lot of these chemicals come from in the first place anyway. I would never argue against modern medicine. As far as I am concerned, herbalism is complementary.

‘I have a very scientific leaning, so for me [witchcraft] makes a perfect balance. If I think about the massive carbon footprint my company has on the data servers it runs, I would retire. But I can’t yet. So I just have to try and live my life in other ways that betters other people and the world around me.’

Psychotherapist Cali White has trained in shamanic healing, trauma work, and ancestral healing. She is a witch, but admits to being reticent about using the term as it has been so misunderstood across the years.

‘For many people, it’s a word that continues to evoke fear, driven by centuries of cultural and religious conditioning of a witch being someone in league with the devil and doer of evil and black magic,’ she tells Metro.co.uk.

‘However, this understanding is changing for increasing numbers of people, and witches are seen as women deeply connected to nature and natural approaches to healing with herbs and through positive intentions.’

Cali says witchcraft provides people with an important connection with each other and with nature, which is important given the division and conflict we are all currently facing.

‘Our modern lifestyles and growing dependence on technology disconnects us from the natural world which is vital for our health and wellbeing,’ she explains. ‘At a time in our history when there is so much destruction and imbalance in the world, the growing witchcraft revival offers us a pathway to more peacefulness in our lives.

‘When I scroll through my Instagram feed there is so much beauty in the images posted by witchy women; their photos of sacred altars, candles, flowers, gardens, journal pages, nature mandalas or sacred spaces. Quite frankly, they are works of art.

‘This kind of natural beauty is a strong antidote to the images of destruction and violence that we are bombarded with on TV. I’d encourage everyone to bring more beauty into their environments; it’s the language of our souls and we need it.’

Cali works with a group called the Silver Spoons Collective, an artistic sisterhood which aims to heal the intergenerational trauma caused from the burning times – when women were persecuted as witches, hanged and set alight between 1450 and 1750.

‘Witchcraft is an ancient art, taken away from our ancestors by the spread of monotheistic religions. So we are having to relearn it,’ she explains. ‘Online platforms are great environments for this and increasing numbers of modern day witches are generously sharing their own experiences and teaching others.’

One of these is Julie Aspinall, a self-confessed ‘crone’ – an experienced witch – who runs a large security company on the outskirts of Coventry. Her ‘normal’ staff will often come to her for help, with spells or herbal medicine.

Julie, 57,  has a herb room with 150 of her homegrown organic herbs, and a selection of oils, teas and tinctures. ‘Many members of my coven were on antidepressants, but now most of them are on tinctures made from natural herbs,’ she says.

According to Julie, lockdowns caused a surge in people joining covens as the break in their hectic lives invited them to question their identity. ‘A lot of people discovered that actually, we’re all witches. We can all do things. We can all manifest what we want from the universe, if we just believe we can.’

She now runs a coven on Facebook, with 2,500 members from around the world. Here she holds rituals, the most recent being a live stream from Glastonbury Tor where her witches honoured the new moon and celebrated new beginnings. They asked for peace in Ukraine and wrote wishes on bay leaves and burnt them. After a ritual, Julie says, participants feel better; calmer, more balanced and more positive.

‘We have no hell in witchcraft,’ she explains. ‘There is no such thing as the devil either. There is none of that. Witchcraft is healing people, helping people and positivity.

‘There are hundreds of online witch groups on Tiktok and Twitter. But on mine we have crones from all round the country; people who have been witches for years and years. We’ll put spells up, we’ll post information about goddesses and gods and different aspects of witchcraft. And we upload videos so people can see how to dress a candle ready to do a spell.

‘And it is somewhere that is a safe place,’ Julie adds. ‘It means their neighbour and their friends don’t know they’re on there. It’s a closed group. There used to be a stigma around witchcraft. There certainly was when I started 40 years ago. You would never have dared tell people back then. You’d think the men in white coats would come and take you away.’

Not so anymore, witchcraft is en vogue. Simon Cowell and Adele use crystals for healing, while Miranda Kerr cleanses her home with a sage smudging ritual. The Kiwi singer Lorde even described herself as ‘basically a witch’ in one interview.

People are much more accepting of witchcraft now, says Emma, adding, ‘a witch was originally just a wise person. It’s become so popular. People are so much more receptive to it today. I love the fact that it has finally entered the mainstream.’