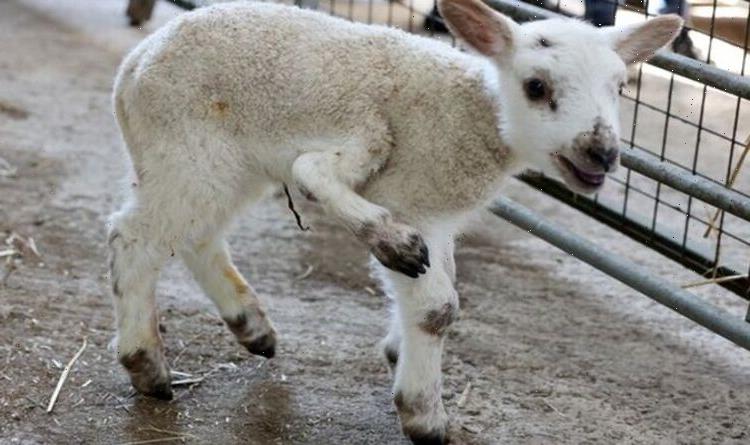 The arrival on Whitehouse Farm, near Morpeth, Northumberland, is the newest member of the family, and a special newborn with a fifth leg. The chances are thought to be one in a million.

Heather Hogarty, part-owner of Whitehouse Farm, said this is the second time she has seen the phenomenon in her quarter-century stint at the farm.

She said: “You could see it as soon as it was born.

“It’s on the front left side so it’s just another leg that comes out of the shoulder.

“It is unusual, but animals having something a bit different does happen.

“We get many animals born with disabilities, but you don’t see them as often as sadly they get put down.”

Ms Hogarty added that the young lamb’s health was being closely monitored, and veterinary intervention may be required.

She said the farm’s staff were hoping to save the lamb from surgery to remove the extra limb, if at all possible.

She told ChronicleLive: “We think as long as it is going to live a normal life, we will just keep it.

“We’re just keeping an eye on this one at the minute, so it might have to have the leg removed.”

The lamb is yet to be named but comes almost ten years after another five-legged lamb was born on the Whitehouse Farm.

Aptly named Quinto, the animal seen as the new arrival’s predecessor had an extra leg in the centre of her body.

The additional limb was removed in Quinto’s case, but she had a long and happy life with just four legs.

She went on to have her own lambs, and was a memorable addition to the farm.

Ms Hogarty joked this new lamb felt like a reincarnation of Quinto, born on a significant day.

The unnamed baby sheep was born alongside two others on February 22, 2022.

When written differently, it has the rather uncanny-looking format of 22/02/22.

Ms Hogarty said: “We had one nine years ago but that leg was right in the centre of her stomach while this one comes out the shoulder and doesn’t reach the ground.

“When the new lamb was born I was thinking it was Quinto reincarnated.

“She was born on April Fools Day and people thought we had stitched it on as a joke.

“They are the only two odd things we’ve had here, and we’ve been open to the public for 25 years now.”

The farm is welcoming suggestions for names for the new lamb, with readers encouraged to contact ChronicleLive or email [email protected]