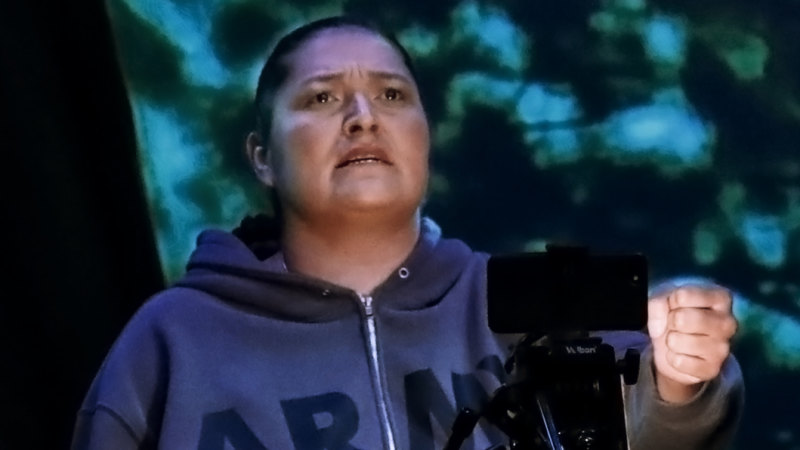 Some of the most powerful recent Australian theatre has been created by Indigenous women taking the ground out from under any sense of audience complacency.

They can be diverse in form, but from Nakkiah Lui’s Blackie Blackie Brown – a black comic revenge fantasy against inheritors of colonial genocide – to the searing songs of experience woven through Ursula Yovich and Alana Valentine’s Barbara and the Camp Dogs, these works confront legacies of injustice and survival with resilient humour and a full measure of rage. 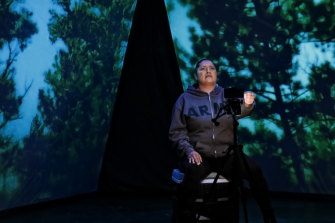 Deer Woman consists of a riveting 90-minute monologue to smartphone.

The theatrical trend,  and the centuries of oppression behind it, are not unique to Australia. In Canada, a report delivered two months ago on missing and murdered First Nations women and girls – about 4000 of them in the past 30 years alone – found government inaction on the issue had made violence so endemic, and justice so rare, it essentially amounted to genocide.

Tara Beagan’s Deer Woman trains its sights on that horrifying reality. Proud Blackfoot woman Lila (Cherish Violet Blood) served in the army and was taught how to hunt deer by her father. When she stumbles on the trail of her younger sister’s killer, she’s determined to put her skills to use.

The work consists of a riveting 90-minute monologue to smartphone, with Lila’s image sometimes distorted and digitally transformed into eerie projections behind her. In a story suffused with barbed humour, love and an aching sense of loss, Lila recounts growing up with her sister and surviving sexual abuse and their mother’s abandonment, portrayed with desolating authenticity and a stark aversion to self-pity.

The intricate textures of her own emotional development, straddling two worlds, emerge. Lila’s complex relationships with the men in her family are drawn through an affectionate portrait of her gay uncle and laconic single dad. After a brush with death and the gift of a deer spirit, she becomes a hunter and a soldier, and following her sister’s murder she attends solidarity marches with other victims’ families.

But behind all the fiercely intimate unburdening lies an implacable sense of vengeance that gathers with elemental force. And by the time we reach the ultra-violent climax, Lila’s suffering is so laid bare in human terms, her power so steeped in the mythic, you could no more wish her brought to account than you could Medea.

Indeed, Beagan’s text, and Blood’s mesmerising performance, reclaim so much of what is ancient and urgent about the art of tragedy – a quality all but lost to more privileged and less talented artists.