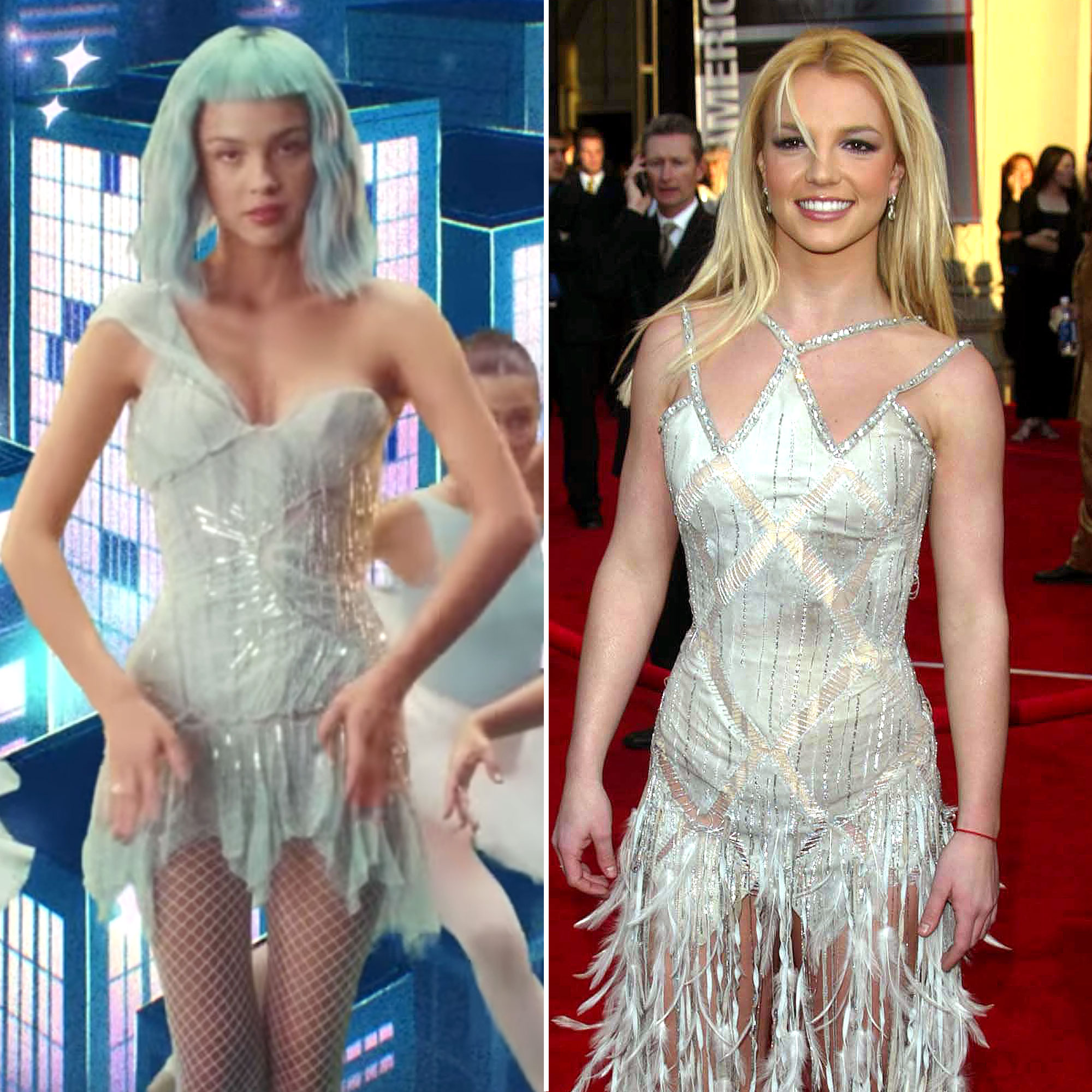 From one icon to another! Be it butterfly clips or plaid mini skirts, Olivia Rodrigo doesn’t shy away from Y2K style. And while her “Brutal” music video, which was released on Monday, August 23, was filled with fashion inspo from the early aughts, one outfit in particular paid special tribute to the OG princess of pop.

Britney Spears’ ‘Favorite’ Bikini Is From Target: ‘Their Suits Are Bomb’

In the video’s opening scene, the 18-year-old singer is wearing a white one-shoulder Roberto Cavalli dress with a bustier-like top. Now while the whole blue hair and fishnet tights of it all gave the look a punk edge, but it should still look a teeny bit familiar.

Why, you ask? Well, Britney Spears wore the exact same ensemble to the 2003 American Music Awards, a fact that was first pointed out by Evan Ross Katz.

This unbelievable fashion tribute delighted fans far and wide, as many took to Twitter to share love for the figurative fashion torch being passed down.

“Olivia wearing Britney Spears’ 2003 mama dress is everything to me <3,” a fan wrote. “@Olivia_Rodrigo wearing one of Britney’s best award show dresses in #brutalMV is the serotonin boost I needed to day,” another person added.

This isn’t the first time that Rodrigo has given a subtle to Spears. In June, the “Drivers License” singer took to Instagram to share a picture of a school girl-esque outfit, complete with a pleated skirt and collared skirt.

It didn’t take long for the look, which was styled by Chloe and Chenelle Delgadillo, to draw comparisons to Spears’ “Baby One More Time” ensemble from the 1998 music video.

Flashback to January, and Rodrigo and friend Iris Apatow gave a subtle nod to Spears, too. They rocked “Dump Him” t-shirts that were first made popular by the “Circus” singer in the early 2000s.

Rodrigo has even spoken up for Spears in the media, commenting on her conservatorship battle during an August interview with GQ.

“The Britney stuff was just horrific, and I’ve been following it very closely. I think it’s just so awful. I think, as an industry, people are getting better at not taking advantage of and manipulating and bullying young women,” she said.

The “Deja Vu” singer continued: “But it’s still so apparent, and I witness that too. Not near at the level that Britney has, obviously. I think that’s an important paradigm that I hope that we’ll be able to break in the coming generations. I’ve definitely seen corporate dollars be prioritized over people’s mental health.”