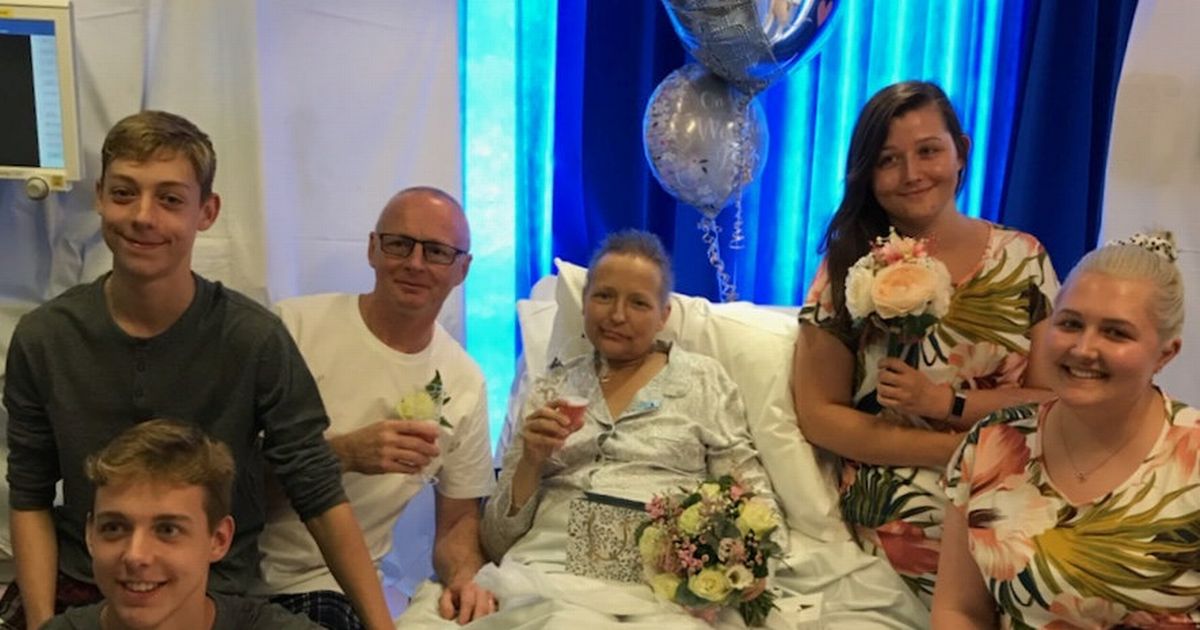 A former nurse has died of a rare form of cancer just days after getting married in a poignant hospital ceremony.

Heather Bellamy wed her partner of five years Max Lincoln, 53, in the hospital where she used to work.

The emotional wedding was in front of all their family, who wore pyjamas to match Heather.

Mum-of-four Heather was just 48 when she died of acute myeloid leukaemia but her husband Max said she was "fighting until the very end."

But after treatment for the fourth diagnosis of cancer began to fail, the family were told that there was nothing more that could be done.

Heather was first diagnosed with cancer in December 2014 but managed to fight it off until a year later when it returned.

She was diagnosed another two times after that but the final dose of cancer proved to be too much.

When Heather's body rejected stem cell transplants and the treatment began to stop working, doctors said there was nothing more they could do.

Determined to marry the love of her life before she died, Heather came up with a plan to marry Max at Queen Elizabeth Hospital, where she previously worked.

Max, from Norfolk, said: "When she was in hospital probably about a month before we had spoke about getting married but one day she just turned to me and said: 'Right we're getting married tomorrow' and I just said 'okay'.

"The next day I went out to buy a wedding ring.

"It was just the right thing to do. You would not find two people more in love than us."

And so began a frantic dash to the shops for a wedding ring and outfits as staff at the hospital arranged flowers and a cake for the ceremony.

Heather's daughter Lilly Young, 24, who also works at the hospital, bought herself and her sister matching pyjamas to wear for the occasion.

She said: "Me, Max and my brothers had to dash around for everything we needed.

"Because my mum was in pyjamas, we all bought new pyjamas to wear so we could match her.

"The staff at the hospital were amazing. There was one nurse who decorated it all and they covered up all the machines."

Surrounded by their family, Max and Heather got married on July 18, just weeks before she sadly passed away on August 3.

Max, a contract supervisor, said: "It was definitely different. We had family members around us who came down with less then 24 hours notice.

"The staff couldn't have done enough for us. In the intensive care unit there's obviously a lot of sick people but they were amazing, it was a really good day.

"She was just an incredible person. She was loving, caring and so family orientated.

"She didn't care about money or houses as long as the kids were happy that was all that mattered to her.

"I asked her if she wanted to do a bucket list and all she wanted on there was to do the garden and to spend as much time as she could with her children. That's all she wanted."

The pair had known each other for 20 years before their friendship blossomed into something much more.

Max explained: "I put my arms around her for the first time and sometimes when you cuddle a friend it can be a bit awkward but it wasn't like that at all, it just felt so right.

"She came round three or four more times after that and it just blossomed from there. It made us stronger."

The family were hopeful that Heather could beat the horrific illness- but they were given the devastating news in March, 2019, that nothing more could be done.

Lilly explained: "We were told that this last round of chemotherapy which was already a last resort was not really working and that nothing could be done. She was fighting the whole way.

"She just had so much bad but I think me and my siblings pushed her through, gave her something to fight for.

"She was my best friend so it's been very hard but she was always family orientated. In the summer, we used to go to theme parks as a family because my mum loved roller coasters.

"She was the most amazing person, she was kind and caring and she was so stubborn which has been evident.

"It's going to be strange going back to work because she's always been there."