Nationals leader Barnaby Joyce has set up an advisory group within the party to help secure an outcome on climate change policy at a special meeting this weekend or early next week.

Mr Joyce said the four members of the group would outline the concerns he could put to Prime Minister Scott Morrison by the end of this week, in another step toward negotiating a deal on whether to cut greenhouse gas emissions to net zero by 2050. 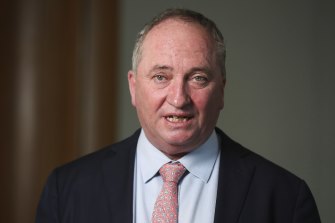 The Nationals have already rejected a higher emissions target for 2030 and are holding out on the 2050 goal even though the policy has a majority in federal cabinet and support from Liberals.

Mr Joyce said the group of four would be used to collate the views of the wider party, put those concerns bring the views into a document that Mr Joyce could consider and take to Mr Morrison to

“This is not a pantomime, we’re not grandstanding, we’re not trying to prevaricate but we are going to be diligent,” he said.

“A decision that affects our nation for three decades deserves, from the National Party, proper oversight and that’s what we’ll do.”

Mr Littleproud has called for a “pragmatic” approach to the issue, Senator McKenzie has expressed concern about net zero, Mr Pitt has strongly opposed the target and Mr Hogan is seen as being open to the 2050 goal.

Mr Joyce confirmed he would call a special meeting of the party room to consider the response to the document from Mr Morrison and Energy Minister Angus Taylor, but he said it would create a “circus” if he revealed the date for that meeting at this point.

Nationals MPs estimate the net zero 2050 target could gain majority support in the party room or at least a reluctant acceptance from most.

Speaking on condition they were not named, MPs said the target would be totally opposed by Queensland Senator Matt Canavan, Queensland MP George Christensen and a handful of others in a bloc likely to make up about one third of the 21 members of the party room.

Others in the party room are open to accepting the net zero target given the importance of Coalition unity, with Mr Morrison setting out an election pitch that promises a net zero target, action on climate change, a bigger economy and an increase in jobs.