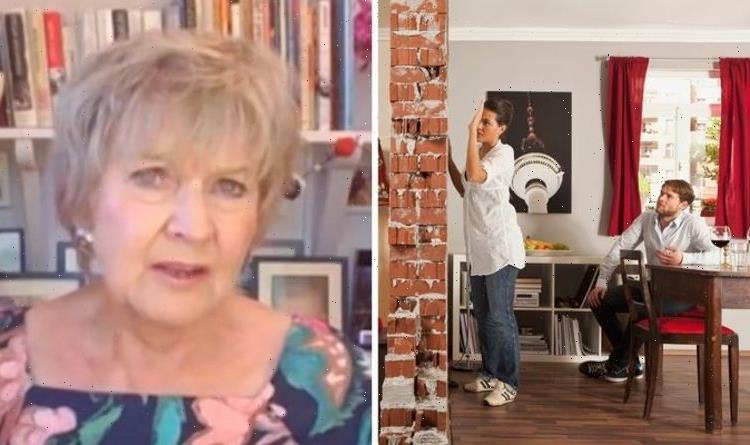 This Morning: Deidre gives advice on dealing with noisy neighbours

Reporting a noise nuisance can be daunting, but there are steps that can be taken to ensure that it doesn’t get out of hand. Appearing on ITV’s This Morning, expert Deidre, who regularly shares advice with viewers, explained how to deal with noisy neighbours in the summertime.

The warm weather means that Britons are spending more time outside enjoying the sun.

With the easing of lockdown restrictions in England, it also means that large gatherings can once again take place in private gardens.

Living in flats can also propose noise disturbances, with loud music being one of them.

One This Morning viewer had phoned in asking for advice on whether or not to approach neighbours after their dog was howling.

Deidre explained: “Dogs howling, that’s not just a question of a dog barking if someone comes to the door.

“That suggests unhappy animals so I would talk to the RSCPA about that and report it and say you’re really concerned.

“If you fear that this man is going to be aggressive, don’t approach them, it’s too risky, do what I’ve said to other people as well, go to the local authority, say that there is this endless noise from next door.”

Deidre said that it isn’t just dogs barking residents should be aware of, it is also hearing out for children.

Deidre explained that going to the RSPCA would mean that the homeowner could remain anonymous but going to the local authority would result in a formal complaint being made, meaning details would need to be given.

She said: “If you go to the local authority, you’re going to have to put in a complaint so that is why it would also be a very good idea to get together with neighbours…talk to your neighbours.”

The Government website lists everything that can be reported as a disturbance.

This includes lots of noise, including loud music and barking dogs as well as artificial lights (except street lamps).

Other reasons include dust, steam, smell or insects from business premises as well as smoke, fumes or gases.

A build up of rubbish that could eventually harm health is also something that can be reported to the council.

However, before reporting it, the Government website recommends trying to solve the problem informally by talking to them first, if it is safe to do so.

It reads: “Before making a formal complaint or getting others involved, try to discuss the problem with your neighbour.

“If you’re worried about approaching them, write a letter, explaining the problem clearly and sticking to the facts.

“If the problem affects other neighbours, involve them as well. It can be easier to settle a dispute if the complaint comes from a number of people.”

If this isn’t resolved, the Government offers a service through its website whereby a complaint can be reported.