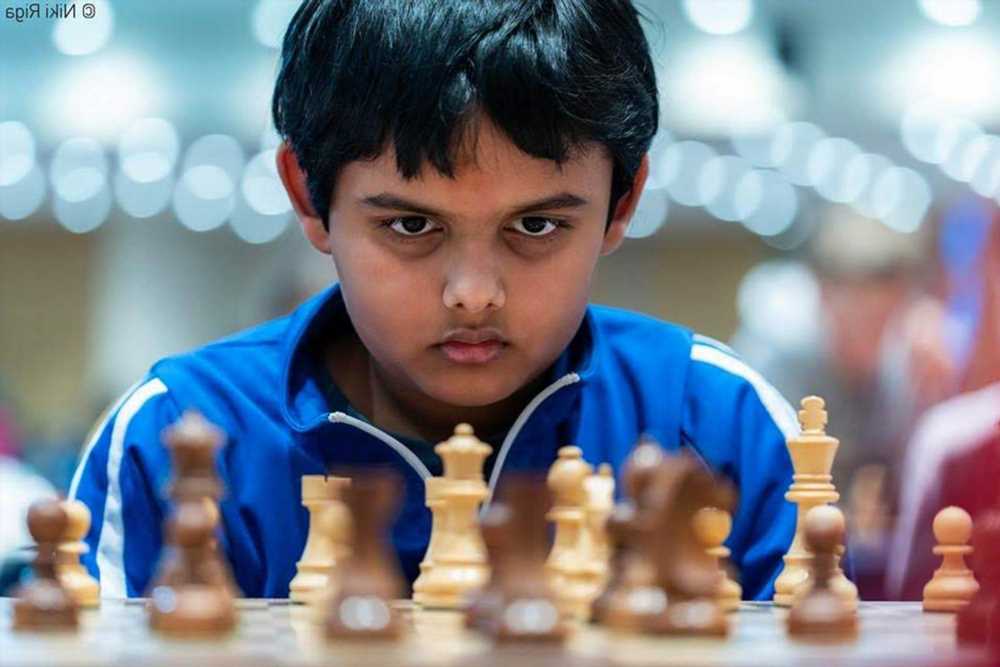 Chess wunderkind Abhimanyu Mishra has serious moves. And he’s only 12.

The Englishtown, NJ, tween has one goal he’s hoping to tick off before Sept. 5: Take the world record for youngest chess grandmaster, set by Russian Sergey Karjakin in 1990, at the age of 12 years and seven months. (Bobby Fischer was 15 when he became a grandmaster in 1958.)

“The stakes are very high,” the boy, who goes by Abhi, told The Post from Budapest, Hungary after a tournament. “I’m not just trying to beat the clock, I’m pressing very hard.”

The home-schooled sixth-grader has won two of the three required grandmaster norms in consecutive events, and is closing in on the final one. He needs an Elo rating (the ranking system that measures skill level) of 2,500 and is currently at 2,496, putting him one win away from the title. He could have the credentials as soon as July, when he plays a tournament in Serbia.

He might well have realized his goal — the highest honor in chess, which about 1,700 people around the world hold — last year if he hadn’t been hampered by pandemic cancellations of tournaments for eight months.

Abhi, who learned to play chess as a toddler, already holds the title of youngest international master, which he achieved at age 10.

“My father introduced me to chess when I was 2½. I slowly picked up the game and started playing rated tournaments when I was 5,” Abhi recalled.

“He started beating me when he was 6,” said his dad, Hemant, who works in data management. “After that I could never win a single game.”

He started beating me when he was 6. After that, I could never win a single game.

Abhi’s coach, grandmaster Arun Prasad, started work­ing with Abhi when the boy was 6.“I soon realized he’s not normal — in a great way,” Prasad said. “He remembers everything he sees. He remembers moves from games in 2015.”

The coach recalled the then-9-year-old Abhi playing a 70-year-old opponent at a New Jersey tournament. “He couldn’t even reach the board properly, but he beat the old man. I thought I was watching history in the making.”

The youngster admitted that on the road he misses his family, home-cooked food — and the “cozy corner” of his New Jersey bedroom where he reads and plays on his iPad — but understands that the temporary sacri­fices are worth it. While mom Swati and his 7-year-old sister stay home, dad Hemant accompanies him to matches all over the world, from Greece to Brazil, Costa Rica to Canada.

With no current corporate sponsorships, it’s also a financial sacrifice. Hemant told The Post the family (Hemant and Swai immigrated from India) shells out about $270,000 a year on expenses related to Abhi’s elite training, travel and tournament costs.

“Whatever people spend on college tuition, we have already invested that in chess,” Hemant added.

Abhi’s GoFundMe page has raised about $15,000. “I badly need to get some corporate sponsorships for my quest to become world champion from our great country one day,” Abhi said.

The kid is known for his intense game face, always staring his opponent in the eye. “Nothing intimidates me and I don’t get nervous playing people older than me. I’m most proud of my game against a very strong grandmaster, Yaroslav Zherebukh,” he said of his 2019 win over the now-27-year-old Ukrainian-American grandmaster.

But Abhi is still 12, after all, and likes to unwind at home by playing video games, including Brawl Stars with friends, who think his chess skills are cool: “They are very supportive and encourage me to become world champion one day.”

As for his pre-game rituals, Abhi said, “I say a quick prayer to help me remain focused during the whole game.” And his hero is not a chess star, but Olympic swimmer Michael Phelps, because the young chess star respects the gold medalist’s work ethic.

And Abhi does have a future plan. Once he becomes a grandmaster, he wants to also focus on his other goal: “I want a black belt in karate.”