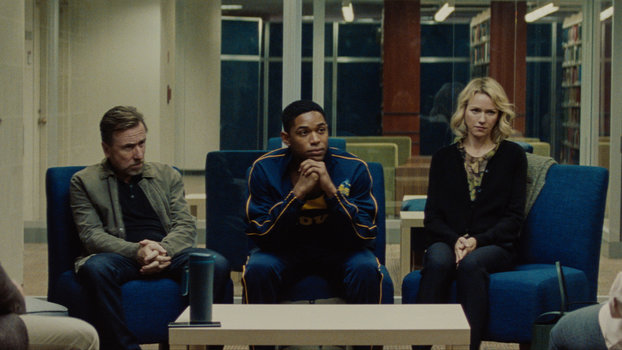 Early on in Luce, Amy (Naomi Watts), adoptive mother of the titular character (Kelvin Harrison Jr.), admonishes her husband for calling their son’s teacher Harriet (Octavia Spencer) a bitch. It’s okay to criticize women, she says, but warns him not to fall into loaded language, as he jokingly snores away her attempts to keep sexism in check.

Stereotypes play a big role in Luce, the gripping film adaptation of J.C. Lee’s Off-Broadway play, from stereotypes of the “bitchy” uptight woman, or stereotypes about model minorities. Luce, a Black high school student, was adopted from Eritrea, where he was raised as a child soldier. His liberal-minded white adoptive parents (Watts and Tim Roth) have raised him, with the help of years of therapy, to be a model of high achievement and excellence at his predominantly white Virginia high school. He’s an all-star athlete, a debate team captain, and one of the most popular kids, well-liked by his teachers and fellow classmates.

But when an assignment causes Harriet to raise concerns about Luce as a potential danger to those around him, Amy and Peter’s begin to reckon with their beliefs about their son. Amy, begins to unravel under the weight of the accusations.

“Amy is a strong woman and definitely fell into the trap of stereotyping and preconceived notions about how things should be — and although well-intentioned, she has blind spots,” Watts tells InStyle. “And I think that’s what this film forces you to do is reconsider your viewpoints, and we’re turning the lens on you and saying, ‘can those viewpoints be so organized and squared away? Or can they be shifted and evolve?’”

There’s no simple answer, and Luce doesn’t give any easy answers for the questions it asks of the audience. The movie’s riveting examination of race, gender, and privilege, touching on society’s hesitation when it comes to believing Black women, deftly turning the lens on the audience and forcing us to examine the imperfections of our perspectives.

“It’s about privilege, it’s about power, and our own personal beliefs, and how they contribute to social constructs,” Spencer tells InStyle. “For me, it just felt real to what women have to go through everyday, especially women of color.”

As Amy and Harriet face off, it’s hard to pick a side. Amy’s devotion to her son is convincing on its own, but as Harriet, Spencer invokes a sympathy that’s hard to ignore.

The incendiary conflict that plays out between the two of them might leave you with more murky questions than satisfying conclusions — but it’s clear that Luce will stay with you long after the credits are done rolling.