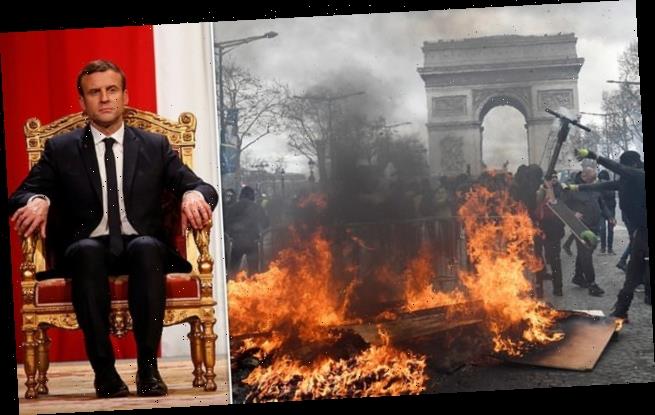 The humbling of L’Égotiste Emmanuel Macron: How the man who thinks he’s the new Napoleon was tripped up on his march to dominate the EU by the bloc’s vaccine debacle

The sense of desperation and decay hits you in the most unlikely places, especially on the Champs-Élysées itself – the famed thoroughfare acknowledged as the most beautiful in the world.

But today there are piles of rubbish, vagrants with nobody to beg from, and lines of high-end shops, cafés and restaurants with security grills permanently pulled down.

And like everywhere else in the French capital, graffiti is commonplace. The most popular slogan is: ‘Macron, démission!’ or ‘Macron, resignation!’.

These words became particularly pertinent this week, when Emmanuel Macron – at 43 the youngest president in recent French history and by no means the least arrogant – made a rare admission of incompetence. 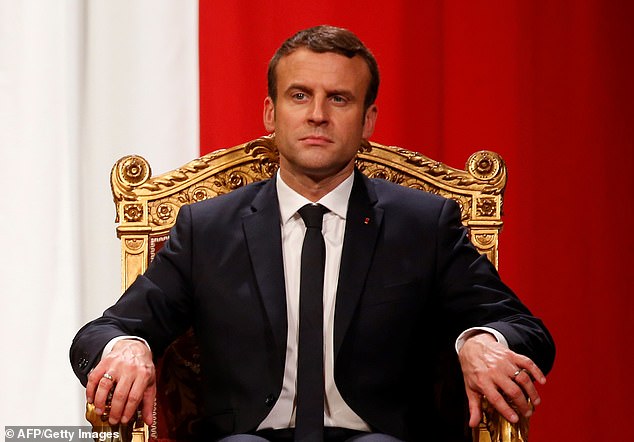 Ministers constantly blame the so-called British variant for the spike. But it is Macron & Co’s failure to control the crisis that has seen the emergence of strains from South Africa and Brazil

Discussing the EU’s failure to implement a vaccine strategy, he said: ‘We didn’t shoot for the stars. That should be a lesson for all of us. We were wrong to lack ambition – the madness… to say, ‘‘It’s possible, let’s do it!’’.’

There was no hint of an apology. In fact, he later said he had ‘no mea culpa to offer, no remorse, no acknowledgement of failure’.

And while praising America for its vaccine policy, he did not mention Britain – a nation he has taken to bashing since the 2016 referendum to leave the EU. This is despite the UK rolling out 46 doses of Covid-19 vaccine per 100 people, compared to just 13 for France.

Now the death toll is approaching 100,000 in France, infection rates are exploding to 65,000 cases a day, and the number of patients in intensive care is at a four-month high of more than 4,500.

As a third wave threatens to engulf us, the capital’s wards are so overcrowded that patients are being evacuated by helicopters to other parts of the country for treatment, and 80 per cent of non-Covid procedures have been cancelled.

Ministers constantly blame the so-called British variant for the spike. But it is Macron & Co’s failure to control the crisis that has seen the emergence of strains from South Africa and Brazil. From this weekend, France is on Germany’s list of ‘high-risk’ destinations and Britain may follow suit.

Many of the less advantaged are dealing with the consequences of a collapsing economy and wondering if it will recover. 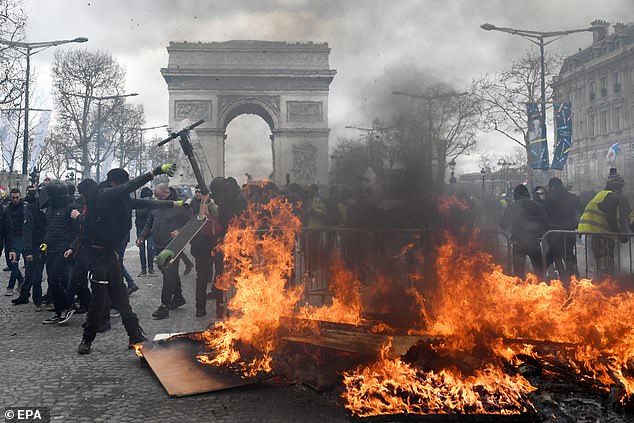 Walk around French cities and you are certain to come across crowds shouting for him to quit. Foremost are the Gilets Jaunes – or Yellow Vests. They started in 2018 calling to end fuel price rises. Buoyed by Macron’s concessions, they made more demands, including Frexit – France’s EU exit

Macron, a former banker and finance minister, is acutely aware of the crippling economic and social problems created by the pandemic. Queues at food banks are a common sight, and there has been a 45 per cent increase in demands for state aid since 2019.

He justified his reasons for not locking down in January as Britain did because of education. But schools may not remain open much longer as infection rates among pupils have risen from 9,000 to 15,000 in one week.

As for the month-long lockdown restrictions announced a week ago, their enforcement during daylight hours is a joke.

Large groups congregate along the Seine and in parks and squares. Social distancing is seldom maintained, and many do not bother with masks.

It is only at night that a curfew ensures that the City of Love and Lights is quiet. Police ask those on the streets for the piece of paper that justifies their presence.

If you do not have one, the fine is €135 (£115), and arrests of those considered a threat to public order are frequent, especially in suburbs where there has been an explosion of gang fights.

Macron’s inability to institute a coherent coronavirus resistance programme intensifies the sense of crisis. On top of the EU’s failure to procure sufficient vaccines and initiate a rollout, excessive red tape – for which France is notorious – is a factor here. 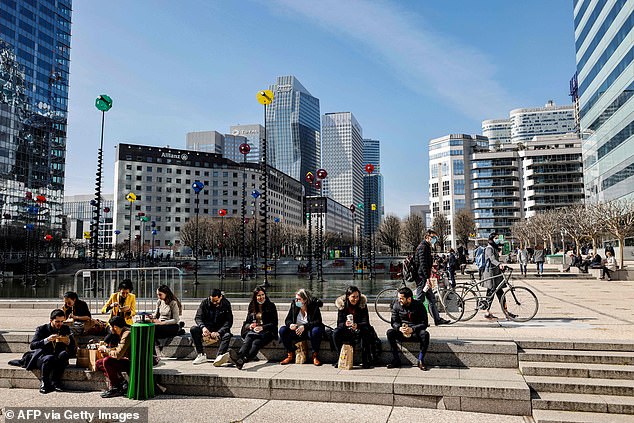 Large groups congregate along the Seine and in parks and squares. Social distancing is seldom maintained, and many do not bother with masks

To this, we must add the traditional French mistrust of vaccines. Macron’s political posturing over the Oxford-AstraZeneca jab has fuelled suspicion. In January, he dismayed health officials when he claimed the Oxford jab was ‘quasi-ineffective’ in the over-65s. This month, French experts decreed it was in fact suitable for everyone.

When concerns were raised about a possible link to blood clots in a small number of patients, Macron appeared to seize on this to further spread distrust in the jab, which was temporarily suspended.

When the European Medicines Agency gave it the all-clear, its use in France was restricted to over-55s, despite a lack of substantive evidence to support this.

Such farcical U-turns led a despairing Professor William Dab, France’s former director of public health, to say there had been ‘a divorce from science’ under Macron. Half-hearted lockdowns and the lack of coherent test-and-trace meant ‘the battle against contamination is lost,’ he said.

The damage has been done. According to one poll, almost two-thirds of French people think the AstraZeneca vaccine is unsafe.

Macron is guilty of blatant politicking over vaccines, putting the health of millions at risk. So why has he done it? The answer is a mix of vanity, personal ambition – and hatred of Brexit which, he once told me, he regards as a ‘crime’.

In the ‘vaccine war’ he saw his chance to be a ‘general’. And his ultimate goal is clear. He views himself as the only candidate to succeed Germany’s Angela Merkel as de facto leader of the EU and the greater federal project.

UK success in going it alone in the vaccine race emphasises the failings of the bloc, which he cannot stomach.

‘I’ll defend Europe, the common destiny the peoples of our continent have given themselves,’ the new Napoleon, has said. How hollow that seems after nearly four years of chaos in France.

Macron has his eye on re-election next year, but his initial promise as an energetic independent politician is wearing thin. He is increasingly seen as a shallow egotist without the vision or management skills to implement change – and Covid has amplified that.

Walk around French cities and you are certain to come across crowds shouting for him to quit.

Foremost are the Gilets Jaunes – or Yellow Vests. They started in 2018 calling to end fuel price rises. Buoyed by Macron’s concessions, they made more demands, including Frexit – France’s EU exit.

Much of their early success was the result of violent street protests that saw large areas of Paris vandalised at a cost of millions.

I stood on the Champs-Élysées watching buildings being set on fire by furious hordes as Macron skulked in the Élysée Palace.

Devoid of ideas or authority, he simply hoped that the problem would go away.

As a metaphor for his handling of the worst health and economic crisis faced by the EU, it could not be bettered. And now things look to get worse – much worse.

Nabila Ramdani is a journalist, broadcaster and academic specialising in Anglo-French issues, Islamic affairs, and the Arab world.