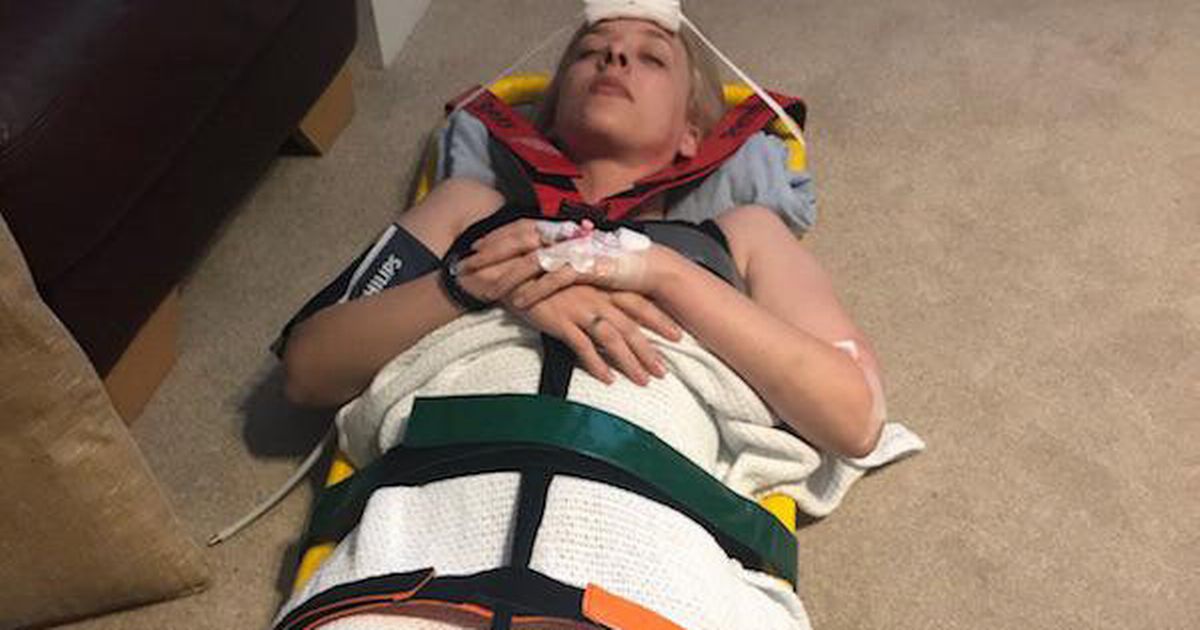 A mum-of-two who was given weeks to live after discovering her spine was collapsing is back on her feet after undergoing life-saving £320,000 surgery.

Samantha Smith, 32, was left unable to care for her two young children, walk or even wash herself after being diagnosed with Ehlers Danlos Syndrome (EDS) – a connective tissue disorder – in January 2017.

Last December she was given the earth-shattering news she risked losing her life if she didn't undergo neurosurgery unavailable on the NHS.

Remarkably she was able to raise the money in just four weeks and now is finally able to walk again following.

Samantha was diagnosed after months of struggling with chronic fatigue, crippling pain and constant seizures.

Her condition worsened by the day until last year when she was told she needed to undergo surgery. Desperate, the former psychotherapist even began arranging her own funeral and making plans for the future of her children, Jensen, ten, and nine-year-old Brooke.

Speaking about her devastating illness, Samantha said: "Three months ago I was dying.

"I was bed-ridden and barely even conscious most of the time because of the pain and fatigue. My short term memory was non-existent.

"I had movement disorder, seizures and my heart was under great pressure due to autonomic dysfunction.

"I went from being a businesswoman, author, columnist, and single mum to barely existing in such a short space of time.

"There was no care – no NHS support or knowledge.

"All I did was sleep and take medicine, I could barely manage an hour with my kids before falling asleep again.

"I would force myself to crawl up the stairs to put them to bed each night. It was petrifying."

However, after embarking on an ambitious campaign to raise £250,000, Samantha booked flights to Arizona in February this year – and underwent life-saving spine stabilisation surgery.

Four months down the line, the mum from Rochdale, Greater Mancs, is beside herself with emotion over the drastic turnaround in her health.

As a result of the surgery, Samantha can now walk unaided, can take her two children to school and is working out to regain her strength on a daily basis.

Speaking about her miraculous recovery, Samantha said: "Since the operation, everything has done a complete u-turn. It's immense.

"Every day I tell myself out loud 'I'm not dying'.

"I'm suffering with PTSD and grieving the life I lost but I'm overwhelmed with gratitude for the people who have chosen to support and save me over and over.

"It's only 13 weeks since the surgery but I'm back home living on my own with my kids. It's an incredible feeling.

"Just being able to walk my kids to school in the morning and take them to the cinema means the world to me. I have my life back."

Samantha's spinal stabilisation surgery and decompression combatted symptoms caused by two conditions – EDS and Craniocervical Instability (CCI) and Atlanta-axial instability (AAI) which meant the muscles in her neck were too weak to support her head due to the connective tissue abnormality.

The ligaments and tendons supporting her spine were stretched and rendered useless.

In total Samantha has had four neurosurgeries over the past two years to help manage the conditions, the most recent of which was a resounding success.

Samantha is dedicating much of her time now campaigning for the life-saving surgery she had done in the States to be introduced in this country for sufferers of EDS and has set up the 'Save Samantha' EDS charity to help others living with the condition.

She said: "I would not be alive were it not for this surgery. Nor would I be here today if it wasn't for the many thousands of people who donated and continue to support Save Samantha campaigns.

"So many people are affected by this condition and could be saved with the right treatment.

"It's not rare, it's misdiagnosed and misunderstood. At the moment it's not available on the NHS, this has to change.

"Some people travel to the US to have it done, which is obviously really expensive.

"Others can't afford it at all."

Samantha is still suffering from EDS, Chiari and spinal instability but her condition is now classed as "stable".

As long as she monitors her health closely, it's hoped Samantha will live a long and healthy life for years to come.