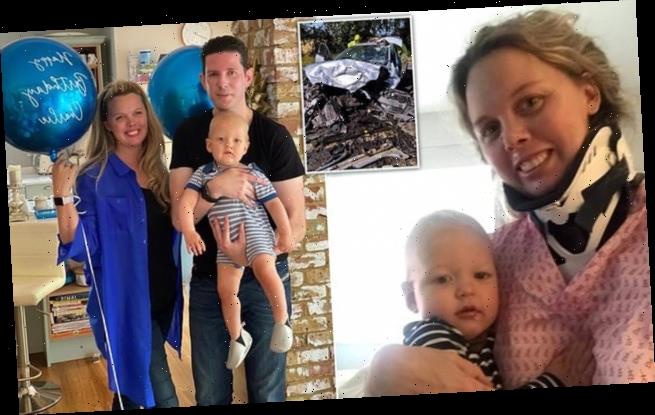 Mother, 40, who nearly died after a driver ploughed head-on into her car is now learning to walk again – at the same time as her 15-month-old son

Watching your child take their first steps is an emotional milestone for any parent – but for brave Rowena Owen it’s even more poignant because she is learning to walk again at the same time as her young son.

Entrepreneur Rowena’s life changed forever on a sunny Thursday in August when a distracted driver careered onto the wrong side of the carriageway and slammed head-on into her Audi A6.

The mother-of-one, 40, was driving back from a lunchtime get-together with a friend who lives an hour from her home in Canterbury, Kent when the horrific smash happened at an infamous accident blackspot on the A2070.

The impact, which police investigators believe involved a combined speed of 100mph, almost completely destroyed both cars, and left Rowena fighting for her life with devastating injuries to her legs, feet, neck, arms and internal organs. 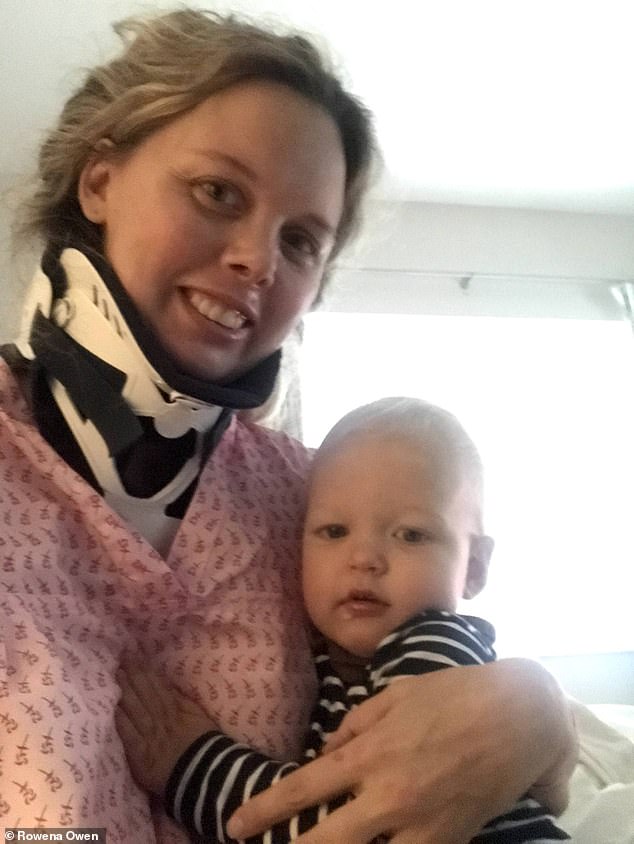 Rowena Owen is learning to walk again at the same time as her young son after a horror car crash left her fighting for her life. Pictured: her first cuddle with Harvey after leaving hospital

It took firefighters 55 minutes to cut her out of the tangled wreckage and she was airlifted in a critical condition to Kings College Hospital in Central London.

Rowena spent six weeks in hospital in the midst of the Covid-19 pandemic, underwent four operations to rebuild her shattered body and was only able to see son Harvey once in that time.

After arriving home on September 25, she began the long and painful road to recovery only able to get around with the help of a gutter frame, at the same time as her 15-month-old was taking his first steps.

Rowena, who joint owns Kent-based holiday let firm Bloom Stays, told FEMAIL: ‘I know I’m lucky to be alive, everyone has told me that. 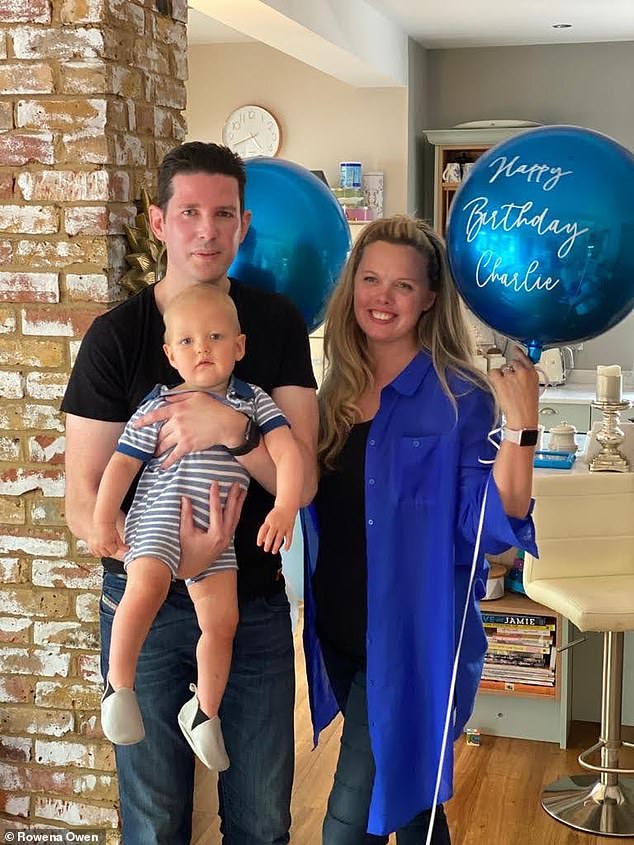 Rowena spent six weeks in hospital in the midst of the Covid-19 pandemic, underwent four operations to rebuild her shattered body and was only able to see son Harvey once in that time. Pictured on partner Charlie’s birthday, shortly before the crash 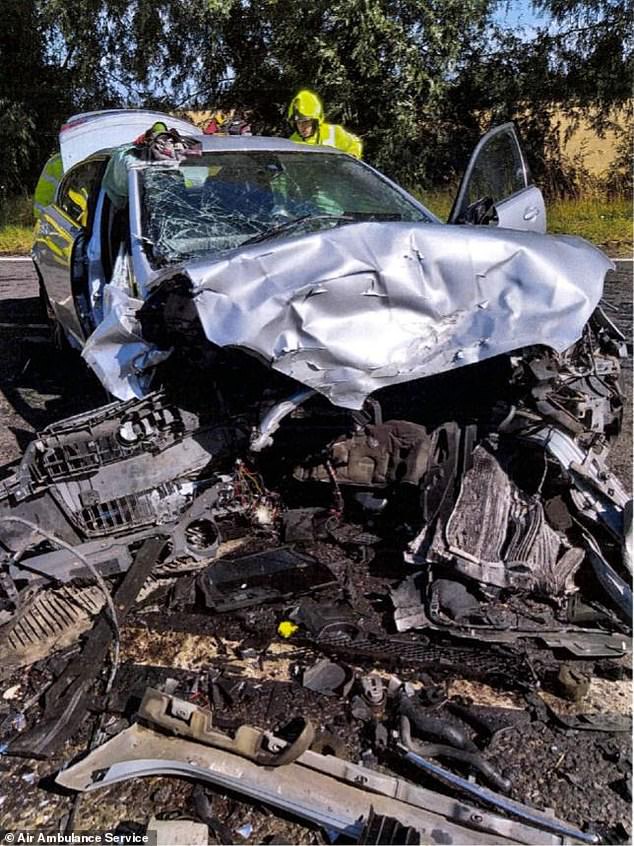 Entrepreneur Rowena’s life changed forever on a sunny Thursday in August when a distracted driver careered onto the wrong side of the carriageway and slammed head-on into her Audi A6 (pictured: the aftermath)

‘We were both in big, strong cars and the police say that’s what saved me and the other driver as well.

‘Being away from Harvey for so long was really tough, I only managed to see him once when my partner brought him up to London to the hospital.

‘I couldn’t wait to see him. He isn’t quite walking yet, so as I had to learn to walk again we started doing it together.

‘Going home was full of mixed emotions, a slight tension of how am I going to manage?

‘I got home after a two-hour journey lying down in an ambulance, still unable to bear the thought of sitting upright for more than 20 minutes.

‘Arriving to the open arms of Charlie my partner, who had done a mad shop around to ensure I had all the kit to be comfy at home. 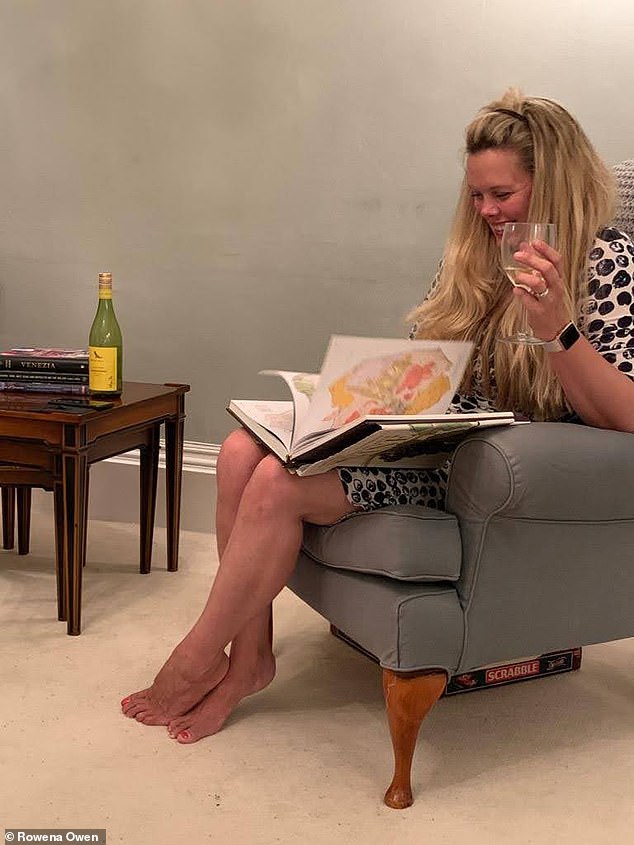 Rowena’s terrible injuries included a broken femur in her right leg, a broken tibia and fibula in her left leg with a five-inch-deep gash in her shin caused by the tibia splintering and bursting through her skin. Pictured before the crash

‘It felt like Christmas morning once indoors and it was almost the strangest dream to be back home looking at Charlie, holding his hand. We were not allowed to on his occasional permitted visits!

‘A kiss was forbidden until the Covid results came back as my son’s nursery had a possible case.

‘When I first got home, I was using what’s called a gutter frame with shoulder support because I could put weight on my right leg but wasn’t allowed to put weight on my left leg as my bones were healing at different rates. 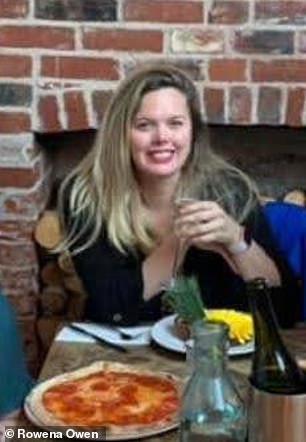 ‘I was obviously delighted but having nothing more than a commode and a gutter frame made me realise my family were going to have to do everything for me.

‘The first morning I woke up at home was really was incredible, a night’s sleep uninterrupted by nurses, beeps and occasional crash noises.

‘Then Harvey was brought in awake and happy with his morning milk and a beaming smile and happy hands outstretched for a hug. That hug was without a doubt the best hug I have ever had.’

Watching Harvey cruise around the furniture, bravely tottering to take his first steps made Rowena realise it was possible her toddler would be walking before her.

‘It took at least two weeks before I caught up with him and we tried together,’ she recalled.

‘Now we can just about totter around a bit together. I can also take a couple of steps now with Harvey in my arms, but no more than that.

‘I’ve been told it will take me about two years to recover, and that I will need a lot of physio as the body forgets how to move and muscles waste away.

‘I even had to learn to hold my arms up again, and they weren’t even broken.

‘I am determined to make a full recovery, so I can do the things mums do with their families.’ 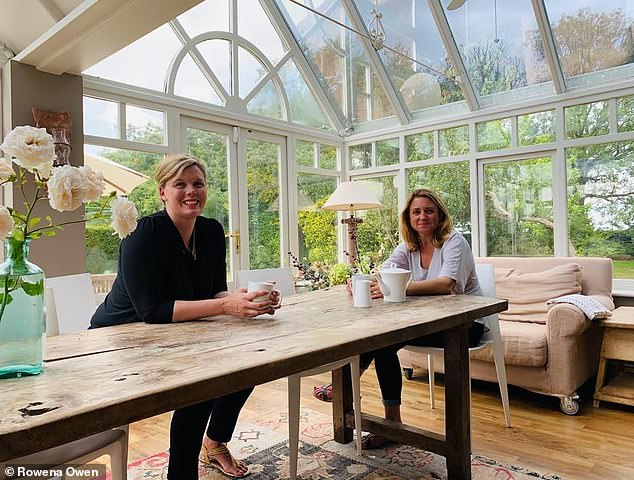 Doctors have told Rowena she should make a full recovery from her catalogue of injuries. Only the broken foot – dubbed a Lisfranc break – could prove troublesome in later years.

Her terrible injuries included a broken femur in her right leg, a broken tibia and fibula in her left leg with a five-inch-deep gash in her shin caused by the tibia splintering and bursting through her skin.

She also broke her left foot, with the middle of the foot separating from her toes. Rowena also suffered a broken bone in her neck, a slipped disk, concussion and deep wounds down to the bone on her right forearm and ankle.

Doctors later found she had a perforated bowel which was caused by the seatbelt ‘hugging’ her, and she was also treated for a pulmonary embolism as a result of bleeding heavily from her left leg.

Medics told her she suffered such bad injuries because she was braced rigid on impact having had just 1.5 seconds to react to the oncoming vehicle. 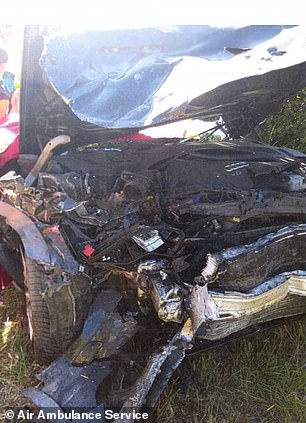 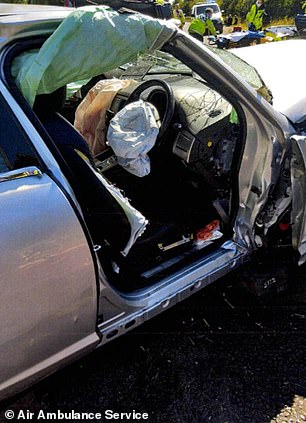 Rowena is keen, once the country is free from the curse of Covid, to hold a huge fundraising event for the Kent Air Ambulance, which saved her life. Pictured: images from the crash site

Rowena underwent four operations, two immediately after she was flown to Kings Hospital, to piece together her severely damaged legs.

Three days after the smash she was transferred to Guy’s and St. Thomas’ to undergo plastic surgery on the left leg and foot and have rods inserted.

Rowena was in the operating theatre again five days later when amid complications it was discovered her bowel had been pierced and she was suffering from an embolism.

She recalled waking up in hospital around six hours after the accident to find her partner of ten years, Charles Cardwell, 42, by her bedside.

‘I wasn’t aware what happened, but I felt calm, safe and somehow knew I had been awake before, but it was all so very confusing,’ she said.

Numb from pain, Rowena, who was a keen gym-goer before the accident, was able to ask whether the accident was her fault. She was told it wasn’t. 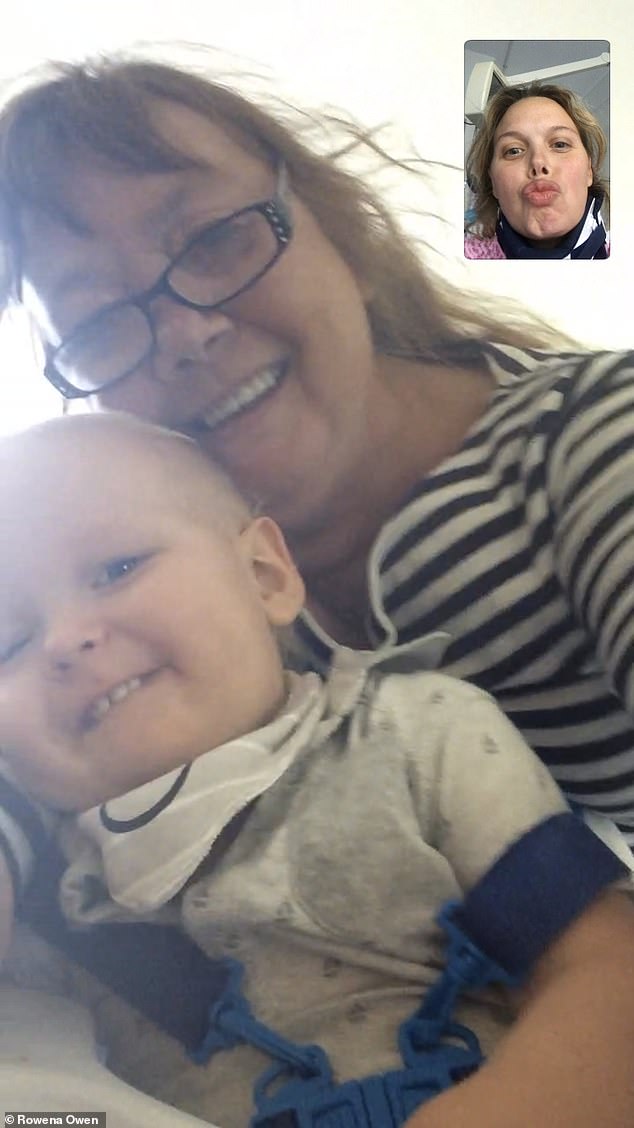 Doctors have told Rowena she should make a full recovery from her catalogue of injuries. Only the broken foot – dubbed a Lisfranc break – could prove troublesome in later years. Pictured: Harvey’s only visit to Rowena in hospital with Rowena’s mum on FaceTime

Flashbacks of the accident are frequent, especially when she is falling asleep.

She said: ‘I have different ones, some very serene of sunshine and wind, which are apparently the last visions of comfort I saw which my mind is showing me to take away the nastiness and put nice bits in its place.

‘It’s mostly when I am about to fall asleep as I am drifting off. It’s more feelings than what I see and it’s the sounds, the horrible bang. When I was in hospital, I would hear bangs, but staff told me that was flashbacks.

‘My last actual memory is of going round a roundabout, then I have a very faint memory of the impact where I see a car in front of me – then black.

‘I discovered that minutes after the crash I called the emergency services myself, which is haunting as I don’t have any memory of the event, but yet I know I must have been terrified. 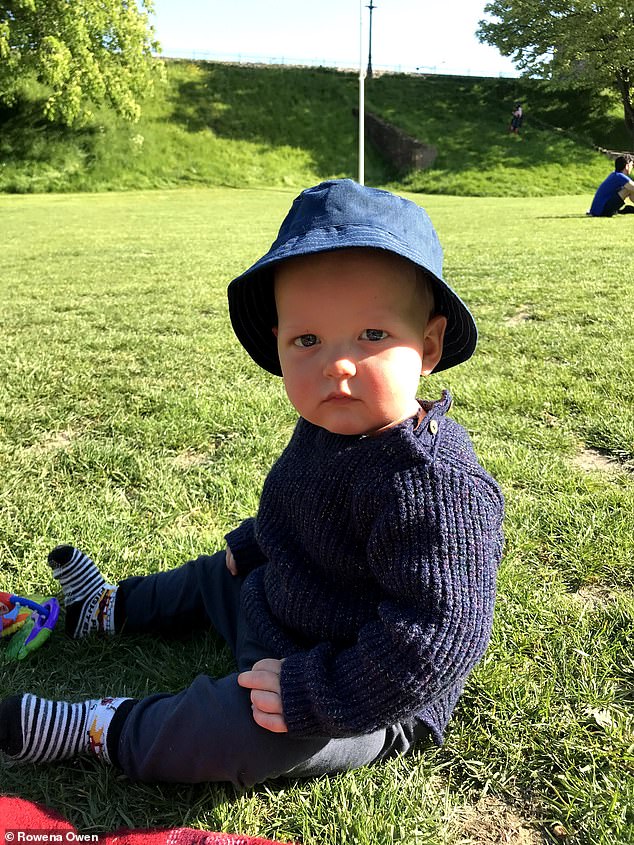 Watching Harvey cruise around the furniture, bravely tottering to take his first steps made Rowena realise it was possible her toddler would be walking before her. They are now learning together

‘The first two police officers who arrived would have seen my leg. My bone was shattered and came through and was bleeding. It must have been pretty horrendous-looking, the door was crushed closed which made it difficult for the emergency services to treat me.’

Rowena plans to arrange to meet Officer Janser of Folkestone Station who stayed with her in the aftermath of the accident while his female colleague treated the driver of the other vehicle.

And a meeting with the paramedics who kept her alive on the helicopter flight from the scene to Kings Hospital is also on Rowena’s to-do list.

Rowena is also keen, once the country is free from the curse of Covid, to hold a huge fundraising event for the Kent Air Ambulance, which only receive minimal funding from local government and rely heavily on public donations.

She added: ‘I haven’t met the officer who was with me yet, but I do have a feeling I know what he looks like, so it will be interesting when I see him if it brings anything back.

‘I didn’t know the air ambulance are not supported and only have a tiny amount of local government funding.

‘My accident was in the middle of nowhere. It was touch and go whether I would survive.

‘It’s not just car accidents, it’s stabbings and all sorts of people who need that type of care. I haven’t met them yet, the crew who flew me.

‘I want to see if I remember them. They are encouraged to meet survivors as it’s good for their mental health to see the results of their work, so I want see them and thank them.

‘They see people in horrible situations. I will meet them this year. I want to try and give something back.

‘Through Bloom Stays we have holiday lets that have helicopter landing pads, so I’d like to do a big thing, with all the great and good of the county.

‘Not just to raise a fiver or a tenner – they deserve so much more than that. I owe them my life.’