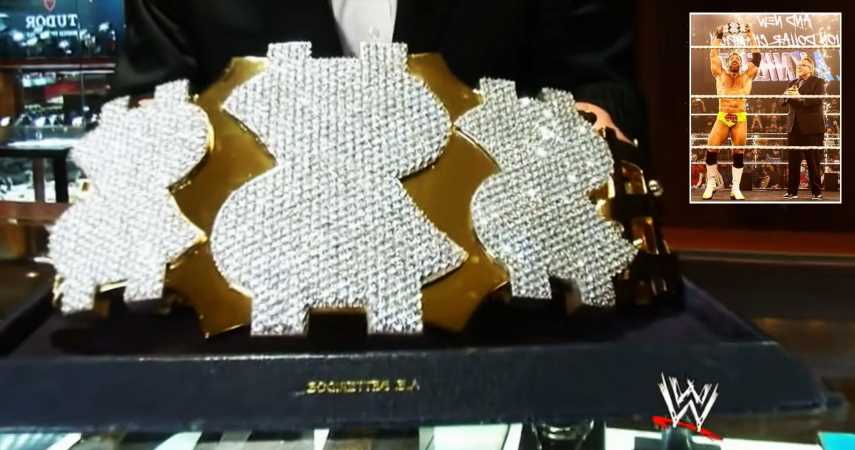 It first came into WWE lore in 1988 by the legendary Hall of Famer, Ted DiBiase. When he was stripped of the World Championship that he attempted to buy from Andre The Giant, he created the Million Dollar Championship. For decades, he best of the best ducked it out for the chance to obtain the iconic Million Dollar Belt. From The Ringmaster in the mid-90s to LA Knight today, those who reigned victories are cemented as kings of the WWE.

But how much is the Million Dollar Belt actually worth?

The History of the Belt

Ted DiBiase, better known as the ‘Million Dollar Man’, was the first to let fans know of his immense wealth. His flashy, aristocratic air upset audiences in such a egregious way, he became on of the most disliked heels in WWE history.

“The first time I walked out into an arena, the people were booing me out of the building,” DiBiase tells in an interview for WWE’s website.

History was made during the Main Event during 1988. After Andre the Giant defeated Hulk Hogan in the WWE Championship, DiBiase tried to buy the championship title off of him – showing that there’s really nothing he can’t buy. DiBiase failed to actually win the belt when he lost to Randy Savage.

Though, this didn’t work out in DiBiase favor. The heads of the WWE voided the transaction and declared the title invalid. A separate tournament was set forth to crown a new champion. But DiBiase had even more tricks up his sleeve.

“You just come out and say, ‘Y’know what? I don’t need your stinkin’ title. I’m going to create my own,” the Million Dollar Man says, “A title that’s beautiful, worth more money than the WWE Title and declare myself the champion.”

He created the Million Dollar Championship as a non WWE sanction title. Viewers got to see DiBiase multiple trips to the jeweler to create the new, stunning belt. Fans saw the full process from start to finish as DiBiase frequented Betteridge Jewelers in Greenwich Village.

First off, contrary to popular belief, the belt is bedazzled with cubic zirconia stones. Not diamonds. So, is the belt worth a million bucks?

“Today, it’s worth even more,” DiBiase explains, “It was gold plate, which is not much, but all of the stones are cubic zirconia, which means they’re almost diamonds. And there’s like 700 of them in the title.”

Another belt of massive cost is the Floyd Mayweather’s legendary ‘Money Belt’. Mayweather won the belt and a whopping $250 million after defeating Connor Mcgregor in 2017.

According to MMA Fighting SNB Nation,The belt was made of alligator leather imported from Italy, around three thousand diamonds, hundreds of sapphires and emeralds and 1.5 kilograms of solid, 24-karat gold.

“It’s a lot of money. I don’t really have a figure. It’s a priceless piece for an historic event,” says World Boxing Council president Mauricio Sulaiman, “It cost many, many, many hours of work of many artisans. It is just a beautiful piece of work.”

While Sulaiman says the belt is priceless, it’s estimated it’s be worth about $1 million.

The Million Dollar Championship has seen its ups and downs when it comes to audience’s intrigue. Though it had its hayday of clambering fans during the 90’s, the last time the belt was on television was back in March 2010. The Million Dollar Man’s son, Ted DiBiase Jr. hoisted the belt onto the WWE stage, proclaiming that his father gifted it to him.

But the belt made a decade long comeback in February of this year. After a career halting injury, wrestler Cameron Grimes returned to the ring. He claimed that, during his recovery, he became a GameStop investor – this was at the height of the GameStock debacle. Thus, he proclaimed to be the richest man in the wresting game. But the Million Dollar Man wasn’t having that!

What proceeded were various segments in which the two put their money where their mouth was, outbidding one another in the most outlandish of purchases.

In May, the two battled it out in an event called the Million Dollar Face-Off, where LA Knight teamed with DiBiase to take down Grimes.