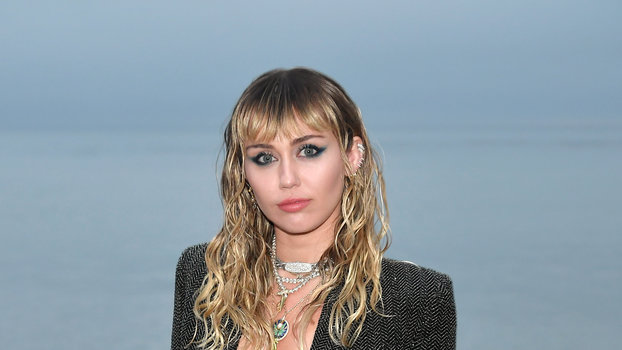 After a year as host and another as a performer, it looks like Miley Cyrus is canceling the MTV VMAs. Her new material wasn't up for a Moon Man this year, which may be why she's hitting up the comments to make her opinion known. It looks like Cyrus was crawling her fans' accounts, adding a comment here and there to let everyone know that she appreciated the support and that she has some major thoughts.

In one shot, which shows Cyrus with her dog, Bean, the fan noted that they'd be skipping this year's show. Without Cyrus there, they said, it wasn't worth watching.

"Guess I'm not watching the VMAS this year unless Miley performs." Cyrus was just as upfront about that idea, writing, "No f-cking way." Well, that makes things pretty clear. No nominations means Miley won't be taking the stage, either. She's had some experience, most recently performing in 2017. In 2013, she joined Robin Thicke for a now-infamous performance of "Blurred Lines."  She actually hosted the show back in 2015.

Another fan said that Cyrus's work deserved to be recognized. Instead, MTV chose to honor clips that didn't have the strong voice that fans see in Cyrus' releases.

"They care more about a f-cking green screen than a message to the world," a fan post read. Page Six notes that the message could be in reference to Cyrus' video for "Mother’s Daughter," which features feminist imagery and promotes a body-positive message. "Nominate anyone but at least do not use the image of Miley to promote their damn prizes."

Cyrus had a simple response to that: "Exactly."

Ariana Grande and Taylor Swift lead the nominations this year with 10 nods each. Billie Eilish was close with nine nominations and Lil Nas X earned eight. These comments aside, Cyrus hasn't released any official statements on this year's group of nominees. Cyrus released a five-track EP, She Is Coming, back in May. Her song with Mark Ronson, "Nothing Breaks Like a Heart," wasn't recognized either.