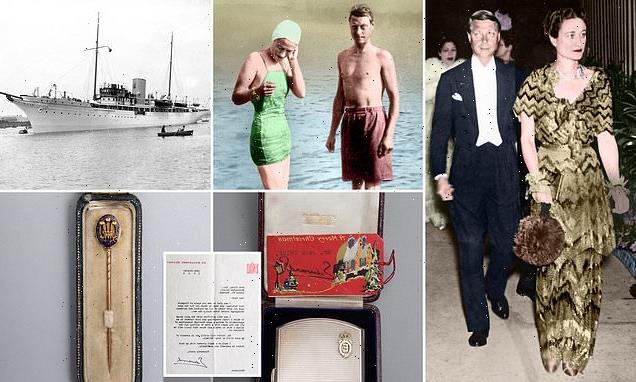 No man is a hero to his valet – certainly not Edward VIII: As a treasure trove of memorabilia collected by the King’s Page of the Presence Jack Crisp goes up for auction, a fascinating insight into the ‘appalling’ Wallis Simpson and a ‘rotten’ sailing trip

Scrawled across a calendar entry in capital letters on a date that resonates in history is one word written in Latin.

It is ‘Finis’ and it is marked against December 11, 1936, the day that Edward VIII gave up his throne for the love of American divorcee Wallis Simpson.

This was how the former king’s devoted manservant recorded both the tragedy of the Abdication and his own repugnance, with a solitary word meaning ‘the end’.

The writer was Horace Jack Crisp, who worked as valet and page to the former Prince of Wales and future Duke of Windsor from 1919 until that December night when Edward sailed into exile, amid a constitutional crisis that threatened to bring down the monarchy.

Now, nearly 85 years later, Crisp’s intimate notes and keepsakes from his years of palace service — he later worked for both George VI and the Queen Mother — have been unearthed. And they shed a fascinating light on this tumultuous chapter in royal history.

They also provide an intriguing insight into the below-stairs morality of the time and the great deference shown to the royals by those who worked for them. 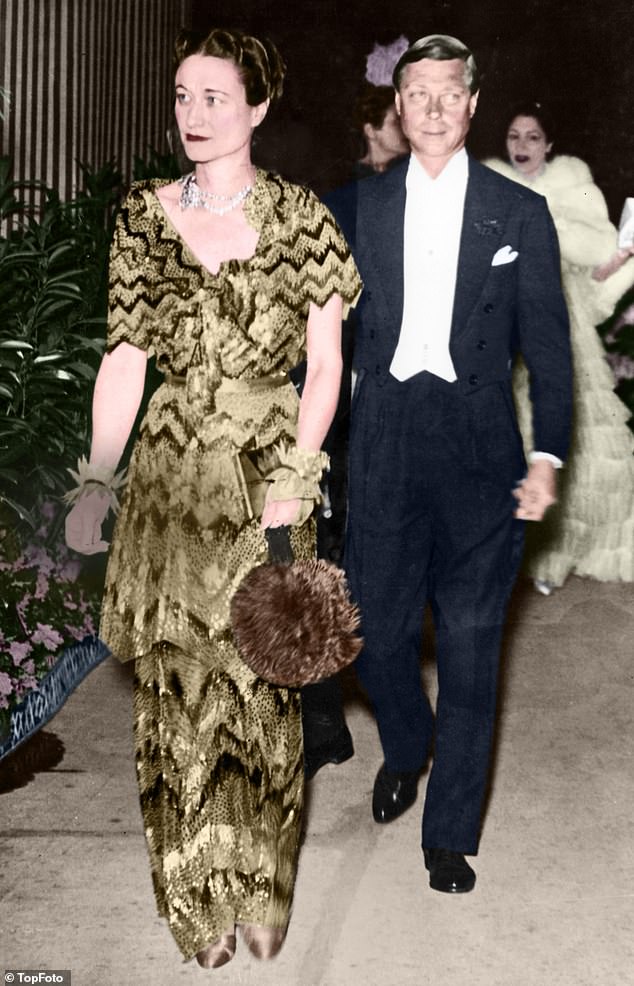 The Duke and Duchess of Windsor pictured in 1937, the year after his abdication. Edward VIII gave up his throne for the love of American divorcee Wallis on December 11, 1936

For 17 years, Crisp was the most steadfast of Edward’s employees. When others could not tolerate the arrival of the bullying Mrs Simpson, he kept silent and remained loyal.

Until the end, that is, when, to Edward’s naive astonishment, Crisp informed him that he would not be accompanying him to France, only hours before the king was due to abandon the crown and set sail from Portsmouth for a new life across the Channel.

Crisp’s only comment, uttered years later, was: ‘He gave up his job, I gave up mine.’

He was there at Fort Belvedere, the turreted folly in Windsor Great Park that was Edward’s retreat, for the last hours of the king’s 11-month reign. And, as this treasure trove of memorabilia reveals, it was where he witnessed and took a copy of his master’s last signature as King-Emperor.

That signature was the one the king used on his instrument of Abdication, signing away his rights to the throne because he could not marry ‘the woman I love’, as he declared in his broadcast to an astonished nation.

The 18-lot collection, which is being sold by auctioneers Spink tomorrow, also reveals that buttoning his lip was, at times, hard for the servant.

Against the diary entry for August 1936 in which he noted ‘Nahlin trip’ — a reference to the king’s louche sailing holiday with his mistress — Crisp added a one-word verdict: ‘Rotten.’

That holiday, seven months after Edward had succeeded to the throne, was the backdrop to the Mrs Simpson affair.

It was on board the chartered, white-hulled, 250ft yacht Nahlin (now owned by vacuum cleaner tycoon Sir James Dyson) that the new king and his lover embarked on an extended cruise around the Adriatic.

To the horror of the British government of Stanley Baldwin, they cavorted with the leaders of several Nazi-supporting countries, drank vast amounts of alcohol and generally made a spectacle of themselves. Royal commentators say the discovery of the Crisp collection reveals the paradox of working for a king whom even his father feared would be a disastrous monarch. 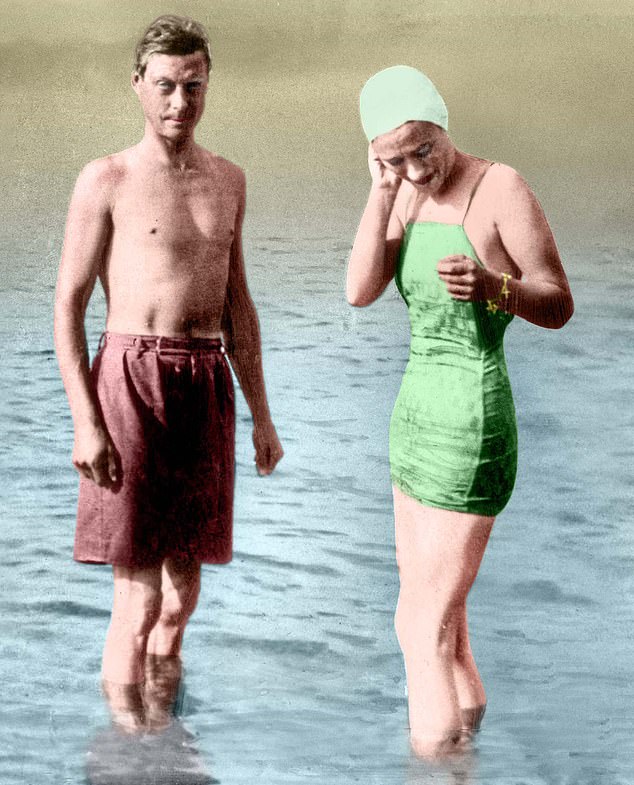 Edward VIII and Wallis Simpson during their 1936 Adriatic cruise in the yacht Nahlin. That holiday was the backdrop to the Mrs Simpson affair 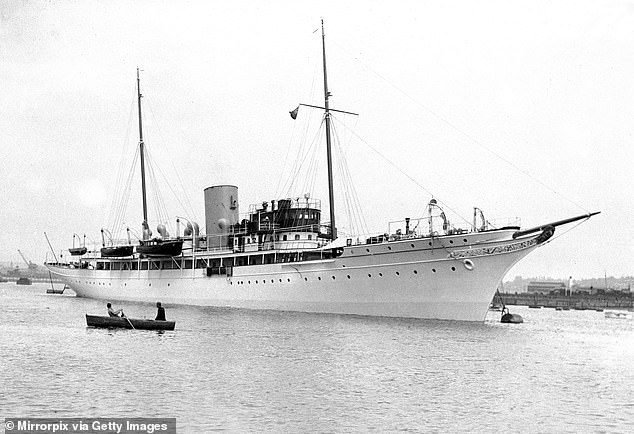 It was on board the chartered, white-hulled, 250ft yacht Nahlin (pictured above, now owned by vacuum cleaner tycoon Sir James Dyson) that the new king and his lover embarked on an extended cruise around the Adriatic

Against the diary entry for August 1936 in which he noted ‘Nahlin trip’ — a reference to the king’s louche sailing holiday with his mistress — Crisp added a one-word verdict: ‘Rotten’

Philip Ziegler, the distinguished official biographer of Edward VIII, said: ‘Mrs Simpson was disliked very much by the staff. She never remembered their names and never bothered to learn them. The king was very good with staff, especially juniors, and he always remembered their names. He was a very tiresome man but he was a good employer, unlike his wife.’

Crisp, he adds, was an important member of the king’s staff.

Indeed, Norfolk-born Crisp was steeped in royal service. His father, Thomas, was a gardener on the Sandringham estate and a brother, Mark, was a groom.

But the relationship between a prince and his valet — the last person he sees at night and the first each morning — is one of the closest in royal service.

It was the role that, years later, another royal favourite was to hold in the life of another Prince of Wales. Michael Fawcett became Prince Charles’s most trusted member of staff while working as his valet.

Crisp joined Edward’s household at the age of 18 and it is clear from the affectionate notes and gifts his employer bestowed on him — now being sold — that the king thought highly of his servant. And to start with, at least, the feeling was mutual. Throughout the 1930s, the prince enjoyed a series of affairs with usually married women. It was through one of them, Lady (Thelma) Furness, that he was introduced to Wallis Simpson.

‘Be sure to look after him,’ Lady Furness said as she left for a trip to New York. ‘Of course, darling, I will,’ said Wallis. And she did — so well that she took the prince away from Thelma.

Before meeting Wallis, Edward — known as David to the Royal Family — was an unconventional prince who didn’t like to waste time. Crisp once estimated that his master could undress, bathe and ‘be on the way downstairs in tails and Garter star within three minutes’ and needed minimal attention from his manservants.

But all that changed when the twice-married Mrs Simpson entered the king’s life. She was determined to keep them busy. Crisp recalled how she once strode from room to room at Fort Belvedere, snapping off the tip of every pencil she could find, with the sole aim of creating work for the staff.

In 1936, Crisp was promoted to Page of the Presence, taking over from Frederick Finch, who packed his bags after a clash with Mrs Simpson when he refused to mix cocktails the American way, with ice. 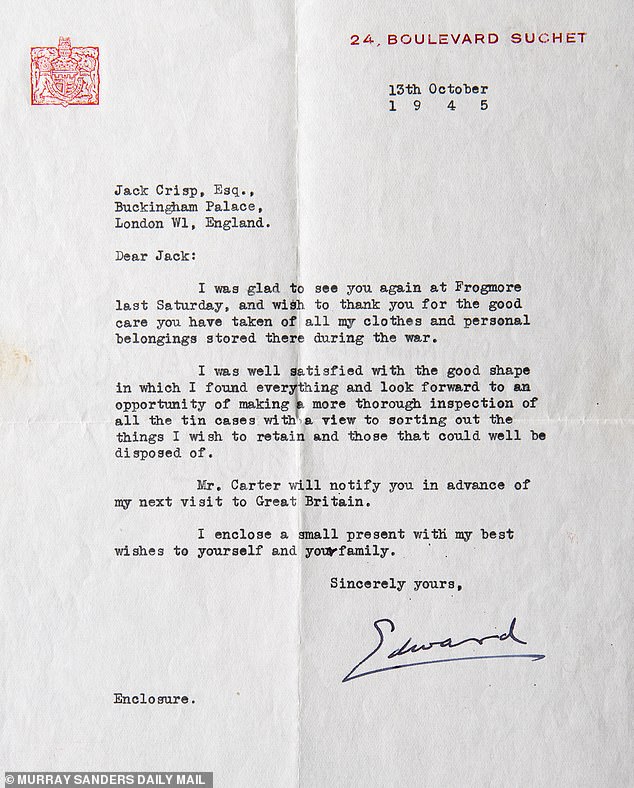 A post-abdication leter from former King Edward VIII to his valet. It begins: ‘I was glad to see you again at Frogmore last Saturday, and wish to thank you for the good care you have taken of all my clothes and personal belongings stored there during the war’ 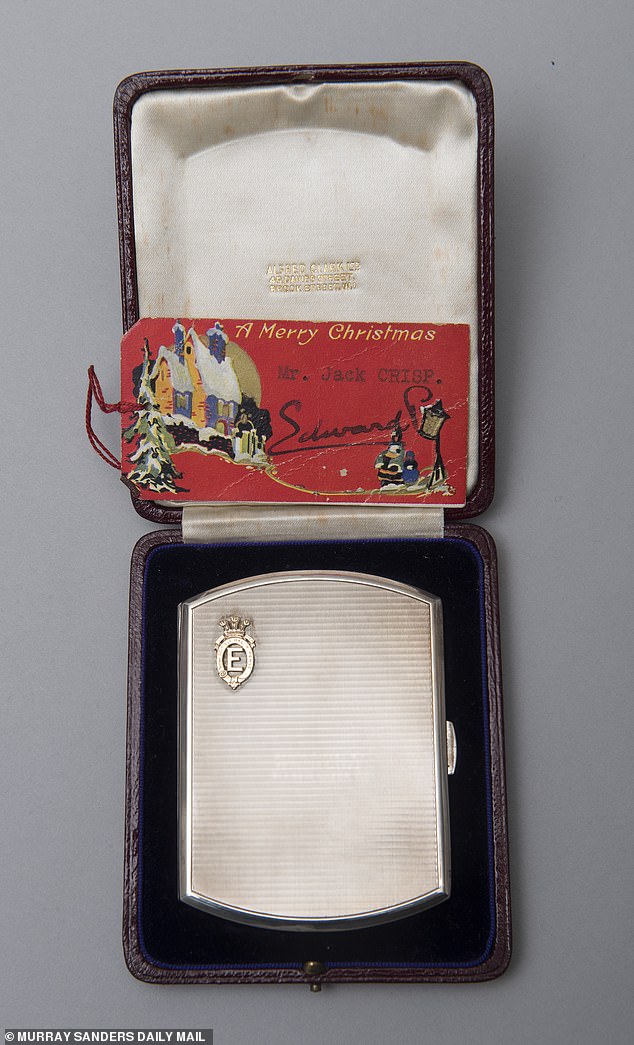 Relics of royal service: Among the lots to be auctioned tomorrow are an inscribed silver cigarette case given to his valet at Christmas (complete with signed gift tag) 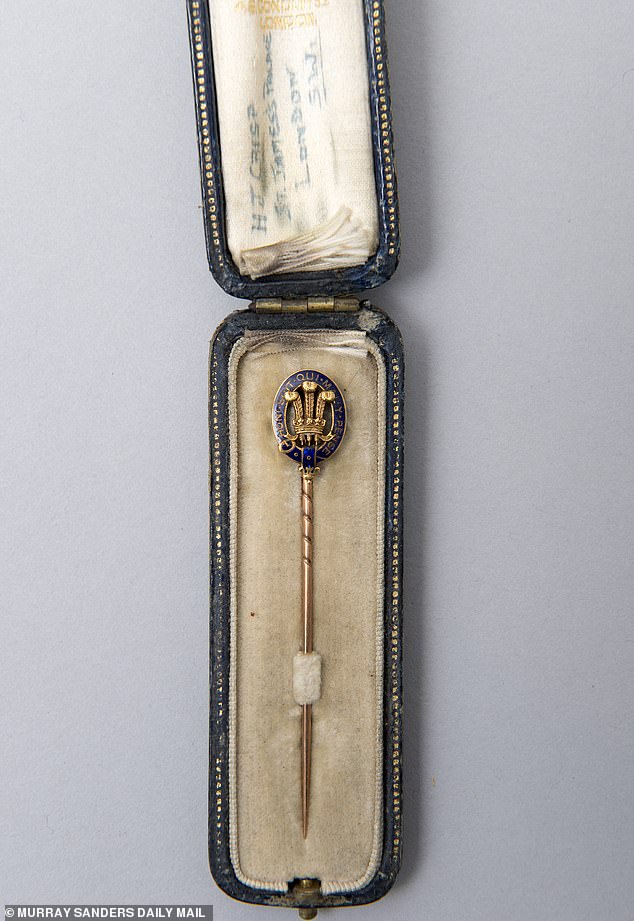 A stick pin bearing the Prince of Wales feathers, also given as a gift, will be among the 18-lot collection to be auctioned tomorrow

Despite finding her ‘simply appalling’, Crisp remained faithful to the king. It was only when told by Edward to pack his things for the Continent that he refused a royal command for the first time: ‘Sorry, but I’m not. I’m staying in England and will be leaving your service when you leave the Fort.’

Within a day of the Abdication, Crisp transferred to the new king’s staff as senior page. Then, following George VI’s premature death in 1952, he became Page of the Backstairs and Steward of the Queen’s Mother’s household at Clarence House, before retiring to Newbury, where he died in 1985.

Although his decorations — he received one of only two Royal Victorian Medals issued during the brief reign of Edward VIII — were sold 23 years ago, his royal souvenirs remained unseen, locked away in a heavy leather suitcase.

They include inscribed silver cigarette cases, a tiepin with the Prince of Wales feathers and engraved picture frames, together with handwritten gift-tags from Edward. There are also signed copies of both the Duke and Duchess of Windsor’s memoirs.

Other items include Crisp’s meticulously kept inventories of the former king’s possessions that were stored at Frogmore following the Abdication, and notebooks with 39 separate lists of his ceremonial outfit and clothing for every occasion, right down to the number of Aertex vests.

The dramatic events of 1936, starting with the death of George V, are annotated on a calendar divided into sections — morning, afternoon and evening. They plot Edward’s transformation from prince to king to exile.

For Crisp, there was more drama to come. He was on duty in October 1955 when Princess Margaret abandoned her love for former Battle of Britain hero Group Captain Peter Townsend, serving the pair sherry in the ground-floor salon at Clarence House as they discussed their future.

Upright and discreet, Crisp never spoke of any of the secrets he learnt behind palace walls. A sign of just how well he was regarded by the Royal Family came at the servants’ Christmas ball at Buckingham Palace in 1950.

It was the ever-loyal manservant, who refused to cross the water with his former boss, who was chosen by the Queen to dance the Veleta with her.