Artist Nina Sanadze originally created Call to Peace in response to the division she saw everywhere in society but her six-metre high woman raging against war takes on a new dimension after Russia’s invasion of Ukraine. 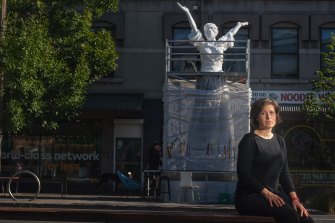 “I was devastated with what was happening, but shocked by how the sculpture sort of predicted or accidentally tuned into what happened,” she says of the work launched on Sunday in South Melbourne. It shows a woman with her arms outswept, having come from the battlefield, devastated: “The mother figure is here to remind us of the horrors of war she has seen and that history that should not be repeated.”

The St Kilda-based artist has Jewish Ukranian/Russian/Georgian ancestry and her family lived for many years in Georgia. They came to Australia as refugees, having fled to Moscow after the Georgian civil war that followed the collapse of the Soviet Union, arriving in Melbourne in 1996.

Installed in Clarendon Street, the sculpture is reminiscent of a classical monument, perhaps Nike, the goddess of victory. The public is invited to write wishes for hope and peace, and to hang them on the piece over the next six months. 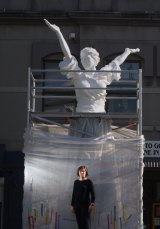 Sanadze has subverted the meaning of the original sculpture, which celebrated victory in war, to an anti-war statement.Credit:Luis Enrique Ascui

Made from polystyrene, it looks like it’s made from marble with the same grandeur and luminosity of the stone. Sanadze plays with ideas of impermanence and has placed the statue on wheels, surrounded by scaffolding. It was commissioned by the City of Port Phillip as part of its Reimagine public art program.

Last year, Sanadze felt a strange compulsion to make the work: “Call to Peace drew me by the throat, [I had] a strong, burning urge to do something with it.”

She released a picture of it on Instagram late last year, before the war started, and was overwhelmed by the response.

“It was more like a prayer,” she says. “People started coming forward and writing messages of love and for and expressing their wishes of love for humanity. A lot of people are extremely disturbed and concerned that our world has been turned upside down.”

The original Call to Peace was created by prominent Soviet sculptor Valentin Topuridze in 1948 as a WWII monument. He was prolific, commissioned to create many such works, often of Lenin and Stalin. “[This] was definitely a propaganda piece, a neo-classical Soviet nationalistic monument about winning the Patriotic War, as it was known as in Soviet Union, now Russia.”

She has subverted the original sculpture’s intended message – one of war and victory, to one of peace and humanity. “Generally my practice is making replicas of things, using original artefacts as evidence of things,” she says.

Sanadze rescued much of Topuridze’s archive a few years ago, when she went back to Georgia. Growing up in the centre of Tbilisi, next door to his family, she spent a lot of time in his garden, climbing giant fragments of sculptures of Stalin and Lenin, their heads, noses and hands, in an “incredible setting like a playground, a monumental sculpture park”.

His sculptures were torn down during the fall of the Soviet regime in the late 1980s.

The work is partially inspired by Motherland Calls, which is the tallest sculpture in Europe, an 85-metre high monument in Russia’s Volgograd, formerly Leningrad. 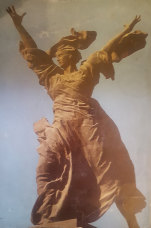 The original Call to Peace monument by Valentin Topuridze, 1948, which stood on the roof of Chiatura town theatre in Georgia.Credit:Topuridze Family Archive

Winner of the 2021 Emerging Artist Churchie Award from Brisbane’s Institute of Modern Art, Sanadze’s work often makes a social commentary. In 2019, she made Bollard City, replicas of the bollards that appeared at the sites of terrorist attacks around the world, and in 2000, she created Re-election, which saw the cardboard booths Australians vote at election time sitting in a charred forest.

At the launch on Sunday, the Boite and other choirs will perform, with ongoing workshops and performances planned at the site in the next six months. For Sanadze, Call to Peace is designed to “bring a sense of hope, beauty, empathy and unity” and as a safe place to bring people together. “It’s a meaningful way of reclaiming the public space, reclaiming Melbourne again.”